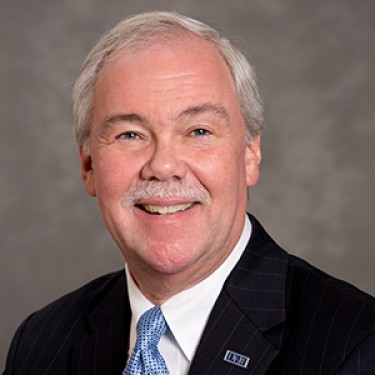 Dean and Professor, School of Pharmacy;

Robert L. McCarthy, Ph.D., FAPhA. began his appointment as dean of the College of Pharmacy on August 1, 2018. Prior to coming to UNE, he was professor of pharmacy practice and dean emeritus in the School of Pharmacy at the University of Connecticut. He was appointed the seventh dean of the UConn School of Pharmacy in 2003, after serving for sixteen months as interim dean. He was re-appointed to a second five-year term in 2008 and received the Outstanding Dean Award from the American Pharmacists Association–Academy of Student Pharmacists in 2010.

During his tenure at UNE, the College of Pharmacy has continued its growth and development as a leader in pharmacy and interprofessional education and practice. The college introduced specialty tracks in wellness/integrative medicine, data analytics, and pharmaceutical sciences, and created a Pharm.D./M.B.A. dual degree program with the University of Maine. An advanced pharmacy practice experience (APPE) in veterinary medicine was created with Portland-based Covetrus. The college developed a comprehensive interprofessional education curricular plan, which takes full advantage of the myriad of health professions programs offered by the university. The college developed an advanced standing pathway to enable individuals with an international pharmacy degree to earn an American Pharm.D. In June 2019, the pharmacy program was awarded a maximum, 8-year accreditation by the Accreditation Council for Pharmacy Education (ACPE). A new, 5-year strategic plan was approved by the faculty and professional staff in August 2019.

Dr. McCarthy’s accomplishments while dean at the University of Connecticut include the establishment of the first two endowed chairs and professorship in the school’s history, a development program that yielded more than $13 million, the construction of a state-of-the-art pharmacy/biology building, the development of new pre-pharmacy and professional curriculums, the establishment of international collaborations, and the creation of dual degree programs in business (Pharm.D./M.B.A.) and public health (Pharm.D./M.P.H.).

McCarthy is past chair of the Board of Directors of the National Institute for Pharmaceutical Technology & Education (NIPTE). He has been an active member of state and national pharmacy organizations, including the American Association of Colleges of Pharmacy (AACP), for which he served as chair of the Section of Social and Administrative Sciences. He also served as national president of the Rho Chi Pharmacy Honor Society from 2010 to 2012.

McCarthy’s interests lie in the areas of health care policy, especially as it relates to pharmacy and pharmacy ethics. His scholarship has focused on the ethical issues facing pharmacy practitioners, including the right to medication and the impact of managed care as well as teaching and learning strategies in pharmacy ethics. He has taught courses in health care systems, health care policy, communication, biomedical ethics, and leadership. He is founding editor and currently co-editor of McCarthy’s Introduction to Health Care Delivery: A Primer for Pharmacists.

McCarthy earned his B.S. in pharmacy, M.S. in hospital pharmacy, and Ph.D. in law, policy and society at Northeastern University in Boston. He also completed an American Society of Health-System Pharmacists (ASHP)-accredited residency in hospital pharmacy at the Massachusetts General Hospital. He was a 1999-2000 American Council on Education Fellow.