Geoffrey Ganter and his Flies 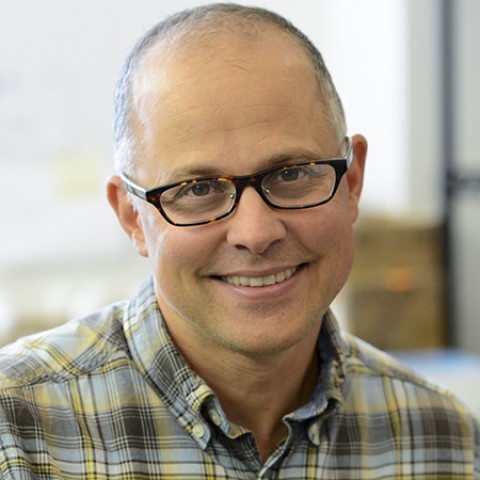 Geoffrey Ganter and his Flies

Fruit flies—those pesky little critters that start buzzing around your head if by chance you forget to wrap that partially eaten peach before setting it on the kitchen counter.

For Professor Geoffrey Ganter, known among students as “The Fly Guy,” those little pests are the beginning of a path to finding future drugs to alleviate chronic pain.

“The fly is a good mix of genetic tools with similarities to other animals.” Ganter explains. “It is similar enough to humans that you can make some correlations between how a part of the nervous system works in the fly and how it is likely to work in a similar way in humans.”

Ganter, who grew up in Massachusetts, first got interested in biology working in his high school’s labs to make a little extra money. He completed his Ph.D. at Boston College studying nitrogen fixation in certain plants, but developed an interest in fruit flies during his post-doctorate research on aggressive behavior at Harvard Medical School. The flies have been the center of his career ever since.

“I’m a curious person. We’re a curious species. I was the kind of kid who liked to take stuff apart to see how it works. Whether I could get it back together or not––it didn’t matter. It was that I got it apart and could see what was making it work. As a biologist I am curious about how living things work. The fruit fly is like the ultimate living gadget—I want to know how it works.”

Fruit fly science began more than 100 years ago. The creatures, which have a generation cycle of about 10 days and a life span of about 30 days, have become one of the most important organisms for taking things apart genetically. A lot of the basics of neurobiology have been determined using fruit flies as a simple model. The fly’s genetics allow scientists to tweak individual genes and individual cells at certain times.

“And once you tweak it, it’s not hard to put it back together and still run,” Ganter says.”That’s what we do in my lab––tweak things genetically and see how that affects the output of that little machine. How does it change its behavior? What does it do differently?”

During any semester about three to seven students work in Ganter’s lab. He believes passionately in the experience of research for undergraduate students.

“When you do something and you come to know some new fact because you did something—that’s a whole new pathway into knowledge in your brain cells. If a student has a good project and pursues it diligently, they will know things that no one else on the planet knows because science is about new knowledge. I think that’s really exciting for them.”

The question that Ganter and his students are focusing on is how a fruit fly’s nervous system dials up and dials down pain and how that can be applied to humans.

Apart from human suffering, each year hundreds of billions of dollars are spent in therapy and lost productivity because of acute and chronic pain. Opioids are the strongest pain relievers but they can cause addiction problems; and there are some kinds of pain that are intractable even to drugs like morphine.

Ganter’s goals using the fruit flies are to develop a model for chronic pain and to identify new drug targets, comparable to the receptors that opioids target, for which new drugs can be designed that will hopefully work better, be less addictive and have fewer side effects.

It’s a long process that, if successful, will take years, if not decades. Ganter is in it for the long run. “We’re not there yet, but we’ve made a lot of progress identifying candidate drug targets. I feel like we’re at the tip of the iceberg. I look forward to the next 10 years and beyond of following these biological pathways along, hopefully identifying major players in the pain modulation system of the fly and maybe having an impact on how pain is treated.”