Joseph Langan and the Sea 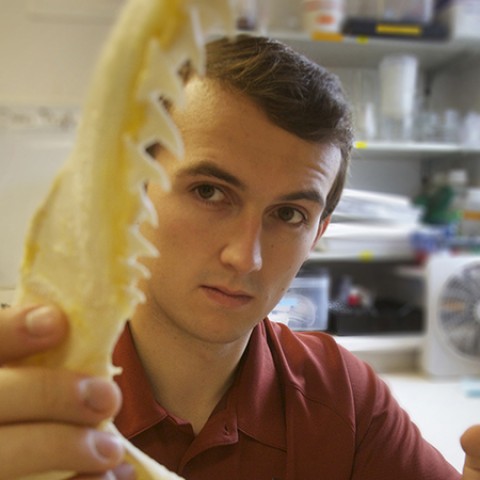 Joseph Langan and the Sea

Joe Langan ’15 knew he wanted to be a marine biologist ever since he was a small boy. He’s been a fisherman for as long as he can remember. With a carrier on his back, Joe’s father Dave frequently took his infant son along on fly-fishing trips along the banks of the Delaware River, near their family camp in the Catskill Mountains of New York. Langan says wryly, “I was hooked,” and the shared father-son passion continues to this day.

But it was a second-grade school project that provided Langan with the “ah-hah” moment that sealed his career fate. The project was entitled “Flat Stanley,” based on a character from a popular book of the same name. Schoolchildren created and mailed a hand-colored paper doll to people around the country–friends, family, celebrities–asking recipients to document and report back on Flat Stanley’s interesting experiences.

"I remember mailing Flat Stanley to my cousin who was working on a research vessel in Florida. He sent back a photo of himself and Flat Stanley on the boat, surrounded by fish, and I was so excited to realize that you could do that for a living; I knew that’s what I wanted to do.”

Langan, now a University of New England Marine Biology/Mathematics double major, retains his child-like enthusiasm as he talks about his future career in fisheries sustainability and management. But make no mistake–this national Goldwater Scholar is flat-out serious about his academics, research, and focused plans to reach that dream.

“I love the mathematical side of managing fisheries…the quantitative ecology. We know we can’t possibly count all of the fish, but how can we save them?” he muses.

Langan and UNE graduate student Connor Capizzano are working together on a National Oceanic and Atmospheric Administration (NOAA) grant-funded project led by associate professor of marine science James Sulikowski, Ph.D. They are researching the impact that recreational fishing has on Atlantic cod, a commercially important species that has been overfished in New England for centuries, and whose population has failed to rebound under current management plans.

The recreational fishery accounts for about one-third of the cod landed in the Gulf of Maine each year, but twice as many fish are thrown back as are kept. A deep cold-water fish, cod are particularly susceptible to environmental factors, including increasing water temperatures due to climate change.

The UNE research looks at the resulting discard mortality of cod populations. Langan is developing mathematical mortality models while Capizzano assesses the human impact, and their results could be used to develop better management plans that ultimately rebuild Atlantic cod stocks.

Langan never intended to be a Math major, but the high achiever entered UNE with 27 transfer credits he earned through AP and college-level courses, and Sulikowski suggested it, knowing the combination would be a tremendous asset. Langan met briefly with mathematics associate professor Susan Gray, Ed.D. during his first week at UNE.

“She was very kind and encouraging . . . she sweet-talked me into it. I left her office thinking, ‘what did I just do?’” laughs Langan, adding, “But seriously, it was the best decision I ever made.”  The dual major laid the groundwork for his continued academic success at UNE. When the NOAA grant was awarded to UNE, Sulikowski recognized it presented many opportunities for modeling, Langan’s area of expertise and interest, so it was fitting to involve him in the research.

Being equipped to cast for opportunity when it arises is a finely honed trait Langan developed years ago, with lessons learned from “the one that got away.” To prepare for his first saltwater fishing trip with his father at age 10, he read articles about what to expect, what to bring, and the kind of gear to use.

Langan was fishing for striped bass using live eel as bait, best suited for a heavy, saltwater rod. “I had to use a spinning rod of mine designed for freshwater–so I protested, but being my first time, my dad said, ‘It’ll be fine.’ On our first night, I cast, felt a big tug, and hooked one…what are the odds? The fish took off and emptied the reel before breaking the line and off it went! I looked at my dad and said, ‘I TOLD YOU SO!’”

Future excursions were far more successful, and his vision never wavered. Langan again has set his sights high in planning for graduate school and a career in fisheries management. Bridging what he perceives to be a communications gap between scientists, politicians and the public is something Langan aspires to.

“I want to be directly involved with policy decisions, to help change things. Many species, along with the industry they support, are in trouble. We need to overcome the disconnect and work together to create a multidisciplinary solution, because we know what’s happening now isn’t working.”