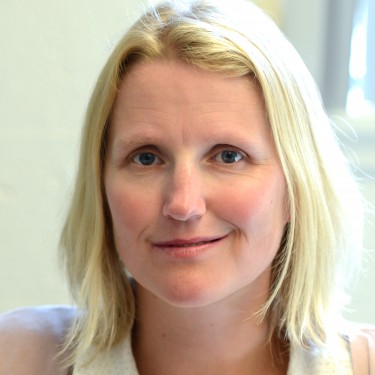 Alex is currently working on a book manuscript, which explores issues of race and white identities in cyberspace, and arises from research she conducted as part of her Ph.D. She has also researched and published in the areas of rape prevention and power, race and racism, and race and policing.

When Alex is not working, she can often be found on the roads of Standish, Hollis, and Sebago, either running or riding her bike ... even when it's 20 below! You might also find her practicing yoga, hiking, climbing, or snow-shoeing. When physically exhausted(!), Alex enjoys watching foreign films, reading mystery fiction, and baking. Of course, while Alex thoroughly loves Maine and its countryside, she is "from (far) away" and has not always lived in Maine.

Alex was born in a small English Midland town, in 1976, but spent most of her childhood years growing up in the South West of England, in the Devon countryside. She was educated in the local school system, first at Shaldon Primary School and then at Teignmouth High School. Throughout her school years, Alex spent most of her time on the sports field, and captained her school hockey, netball, and track and field teams. She also competed at a regional, national, and international level in track and field, and specialised in hurdles and heptathlon.

Leaving Devon for the Yorkshire Moors, Alex continued her studies at York St. John, graduating three years later at the top of her class, with a first class degree in cultural studies. Heading back down South, Alex studied for her M.Phil. in criminology, at the University of Cambridge. While there, she took up long distance running and cycling, and in no time was dabbling in triathlons. Fortunately, Alex found more success in her academic abilities than in running, and after graduating top of her class decided to stay on in Cambridge where she pursued her Ph.D.

A chance encounter with a UNE web-page advertising for an Assistant Professor in Sociology caught Alex's eye as she was nearing the completion of her Ph.D., and in less than five months, Alex found herself at Boston airport where Professor Sam McReynolds was waiting to take her to Biddeford, Maine!