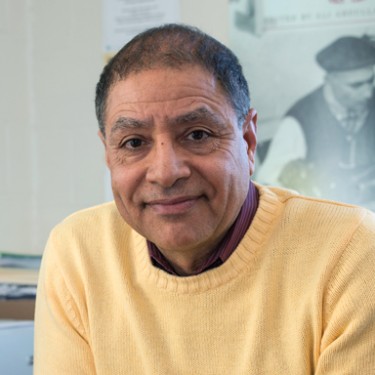 Professor Ali Abdullatif Ahmida was born in Waddan, Libya and educated at Cairo University in Egypt and the University of Washington, Seattle.  He is the founding Chair (2000 – 2014) of the Department of Political Science at the University of New England, Biddeford, Maine, USA.  His areas of expertise are political theory, comparative politics, and historical sociology.  His scholarship is cross-cultural and focuses on power, agency, genocide, and anti-colonial resistance in North Africa, especially in modern Libya.

Dr. Ahmida has published major articles in Italian Studies, International Journal of Middle East Studies, Arab Future, Third World Quarterly, and the Arab Journal of International Studies.  He is also the author of The Making of Modern Libya: State Formation, Colonialization and Resistance, a book published by SUNY Press, 1994, 2009.  This book was translated into Arabic and has been published in a second edition by the Center of Arab Unity Studies, 1998, Beirut, Lebanon.  A third edition was published in 2013.  He is the editor of Beyond Colonialism and Nationalism in the Maghrib: History, Culture and Politics, published by Palgrave Press in 2000.  An Arabic translation of the book was published by The Centre of Arab Unity Studies in 2014.

Routledge Press published Dr. Ahmida’s book, Forgotten Voices: Power and Agency in Colonial and Postcolonial Libya, 2005; an Arabic edition was published in 2009, and an Italian edition will be published in 2013.  Cambridge Scholars Press published his edited book, Bridges Across the Sahara, September 2009, and The Center of Arab Unity Studies, Beirut, Lebanon published his book Post-Orientalism: Critical Reviews of North African Social and Cultural History in August 2009.  His book The Libya We Do Not Know (in Arabic) was published by The Libyan Ministry of Culture in 2014.  Dr. Ahmida's most recent book  is Genocide in Libya, published by Routledge, 2021. He is currently working on two books, one about genocide in colonial Libya, and a biography of Libyan freedom fighter Omar al-Mukhtar.

Dr. Ahmida is currently working on a new book on genocide that links the Middle East with Europe. This book examines the genocidal machinery of the Italian colonial state, internment of 100,000 people in Libya and the silence that followed. The policies of Italy’s Fascist government were unprecedented in the history of African colonialism but it was not until recently that Western scholarship acknowledged forceful deportation of the rural population of Cyrenaica and their confinement in concentration camps between 1929 and 1934.   Dr. Ahmida has spent 10 years researching and interviewing some of the survivors in Eastern Libya.  The book will be published by Stanford University Press.

Forgotten Voices: Power and Agency in Colonial and Postcolonial Libya. New York.: Routledge,  2005.  An Arabic translation was published by The Center for Arabic Studies, 2009.

Editor. Beyond Colonialism and Nationalism in North Africa: History, Culture and Politics. New York.: Palgrave Press, 2000.  An Arabic translation was published by Center of Arab Unity Studies and Libyan Ministry of Culture, 2014.

Editor. Bridges Across the Sahara: Social, Economic and Cultural Impact of the Trans Sahara Trade During the 19th and 20th Centuries. London.: Cambridge Scholars Press, 2009.

“The Post Colonial State and Social Transformation in Libya”. Tabayyan. 2012

“The Post Colonial State and Social Transformation in Libya”. The Arab Center for Research and Policy Studies Online. 2012

“Libya, Social Origin of Dictatorship and the Challenge for Democracy”. Journal of the  Middle East and Africa. 2012

"Colonialism, State Formation and Civil Society in North Africa: Theoretical and Analytical Problems,” International Journal of Islamic and Arabic Studies,  XI:I (1994). A French translation of this article will be published in 2003.

“Theories of Social Revolutions in the 20th Century and the Arab Spring”. University of Akron. March 20 2012.

“The Struggle over National Symbols in the Libyan Revolution” Revolution in MENA,  Oberlin College. March 17 2012.

How to Think About National Reconciliation in Libya. University of Tripoli, December 24-26, 2011

“After Qaddafi: The Challenges of Building a Civil Democratic System”. United Nations Department of Political Affairs and the Department of Peace Keeping Missions, New York, June 9 2011.

“Why Qaddafi Already Lost and the Ghosts of Libya’s Colonial Past”. Georgetown University, April 27 2011

“The Sahara as a Contexted Space,” African Studies Distinguished Lecture Series, 1999 - 2000, Africa at the End of the Millennium, Center for International Studies, Washington University and University of Missouri - St. Louis, October 2000.

“Theories and Models of Citizenship”, University of New England, Biddeford, Maine, May 1999.

“The Crisis of Governance in North Africa,” Presenta­tion, 28th annual meeting of the Association of Arab-American University Graduates, Washington, DC, 1995.

Dr. Ali Ahmida&#39;s&nbsp;&nbsp;research interest has been centered on the historical roots of civil society and how ordinary citizens react to state pressure. &nbsp;He&nbsp;addressed this theoretical issue in his&nbsp;PhD dissertation and his first&nbsp;book on the Making of Modern Libya. &nbsp;He&nbsp;spent 20 years engaged in original research collecting the data in the U.S, Libya, Egypt and Italy, using the national archives, and pursing an innovative methodology of collecting oral history which is becoming a recognized source of research in scholarship today. &nbsp;He&nbsp;examines&nbsp;the dynamics of power, agency and anti-colonial resistance in North Africa, especially modern Libya and the Sahara.&nbsp;