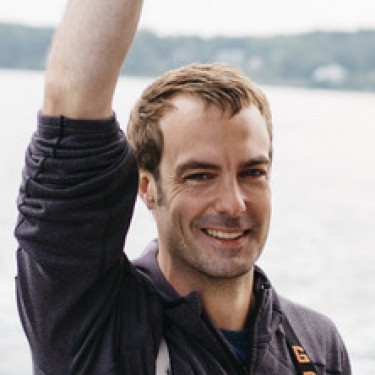 Barton Seaver is on a mission to restore our relationship with the ocean, the land, and with each other—through dinner. He has translated his illustrious career as a chef into his leadership of the Sustainable Seafood and Health Initiative at the Center for Health and the Global Environment at the Harvard T.H. Chan School of Public Health. In this role, Barton spearheads initiatives to inform consumers and institutions about how our choices for diet and menus can promote healthier people, more secure food supplies, and thriving communities. He also serves as Senior Advisor in Sustainable Seafood Innovations at the University of New England.

Barton is a firm believer that human health depends on the health of the ocean and that the best way to connect the two is at the dinner table. As an award-winning cookbook author, Barton pairs simple cooking techniques with a vast knowledge of seafood for a fresh take on sustainable eating.

As an executive chef, Barton opened seven restaurants awarded both for their cuisine and as environmentally-conscious businesses. Highlights of his culinary career include three Rising Culinary Star awards, twice earning Best New Restaurant awards, and being honored in 2009 by Esquire magazine as Chef of the Year. His restaurant Hook was named by Bon Appétit magazine as one of the top ten eco-friendly restaurants in America.

Since leaving the restaurant world, Barton has become involved with a number of local and international initiatives. In 2012, he was named by Secretary of State Hillary Clinton to the United States Culinary Ambassador Corp. He uses this designation to curate international conversations on sustainability and the role of food in resource management and public health. He is the Director of the Sustainable Seafood and Health Initiative at the Center for Health and the Global Environment at the Harvard T.H. Chan School of Public Health. The initiative uses human health metrics to better define sustainability by cooking with bycatch species, serving conscious portion sizes, and shining a spotlight on healthy aquaculture practices.

An internationally recognized speaker, Barton has delivered lectures, seminars, and demos to a multitude of audiences. His 2010 Mission Blue Voyage TED Talk entitled "Sustainable Seafood? Let's Get Smart" garnered over 400,000 views. He is also a contributing editor at Cooking Light and Coastal Living magazines.

Barton is the author of 5 highly regarded books. For Cod and Country: Simple, Delicious, Sustainable Cookingintroduces the idea of seasonal eating to seafood. Where There's Smoke highlights the art of cooking over fire. He is also the author of two books in his role as a fellow with the National Geographic Society. The National Geographic Kid's Cookbook and Foods for Health, a science-based guide to healthy, everyday eating. His most recent work, Superfood Seagreens: A Guide to Cooking with Power-packed Seaweed explores the health benefits of this emerging player in the superfood realm. His second sustainable seafood-centric cookbook entitled Two if by Seapublishes in May 2016. He is currently writing From Sea to Shining Sea, a compendium of history, culture, science and culinary notes. Part cookbook, part historical archive, it will document every commercially available species harvested in the US to date. It is slated for release in the Fall of 2017.

Barton currently resides in coastal Maine, a stone's throw away from a working waterfront, with his wife and their 10 heritage chickens.

The Culinary Institute of America