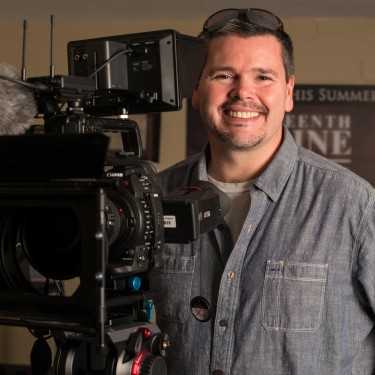 Daniel Lambert is UNE’s resident filmmaker, using the media of film and video to tell the countless individual stories that, together, make up the UNE community. Whether he’s hanging off the side of a boat to film Marine Science students in action, or jetting off to Morocco, Ghana or Iceland to capture the cross-cultural experiences of students, Dan is always alert for the personal element in any story—bringing a distinct humanist touch to all his work.

A native Mainer, Dan has been producing and directing documentaries and short films for more than fifteen years. Prior to joining UNE in 2014, he was a longtime director/producer at the Maine Public Broadcasting Network (now Maine Public). He has received over 20 New England Emmy® nominations since 2009, and was awarded the 2012 Autism Society of America Media Excellence in Video, Print or News award.

Dan has produced and directed numerous Emmy®-nominated documentaries for television, including: “Forlorn Hope,” “Sixteenth Maine at Gettysburg,” “A Fortnight in Ghana,” “Windjammers of Penobscot Bay,” “Easing the Burden: Parkinson's Disease, featuring Michael J. Fox," “Making Our Way: Autism,” and Caring for the Caregiver.” Lambert was also the photographer/editor for "Reckoning with Climate Change in the Gulf of Maine," and he edited “A Matter of Duty: The Continuing War Against PTSD,” which was awarded first place in the 2014 Maine Association of Broadcasters Awards, Television Public Affairs Category.

“Looked at a certain way, a university is just an uncommonly rich collection of interesting people with interesting stories,” says Lambert, “And it’s a privilege to be able to share those stories with the UNE community and the public.”