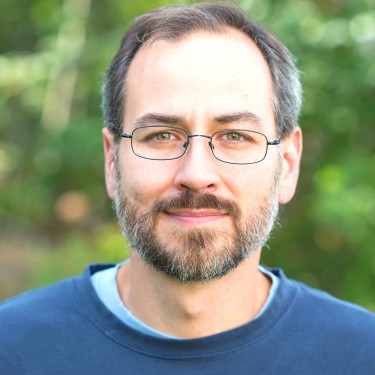 Dr. Stubbs is primarily interested in using computers to investigate and explain chemical phenomena.  His current research focuses on two distinct areas: DNA hybridization on a surface, an important problem for DNA sensor arrays; and supercritical fluids as separation media, which can greatly improve purification efficiency.  He is also interested in the hardware and software aspects of computers in chemistry, primarily using the GNU/Linux operating system and FORTRAN programming language.

Application of a coarse-grained DNA model to denaturation and hybridization transitions in solution and with surface-bound DNA strands.

The first area is focused on DNA sensor microarray technology, which is composed of single-stranded DNA oligomers bound to a surface. The development of this technology relies on knowledge of DNA denaturation or "melting" and hybridization transitions, and their sensitivity to many variables has left several questions unanswered, such as the mechanism by which changes in physical environment between solution and bound DNA act to influence hybridization, or competitive adsorption of nearly identical sequences.

The second area attempts to improve upon separation technology using fairly innocuous materials such as supercritical carbon dioxide and polyethylene glycol to achieve what traditional processes do with more detrimental materials. &nbsp;Molecular simulations allow the modeling of such systems with the goal of optimizing solvation conditions and is done by carrying out calculations with varying thermodynamic (e.g. temperature and/or pressure) conditions and compositions.