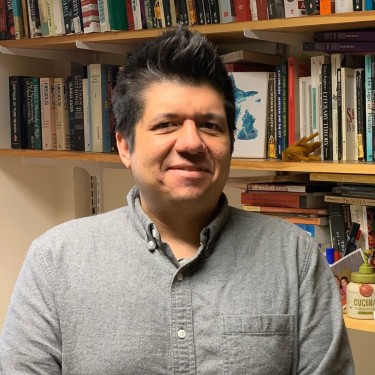 Professor Alegre's book, Railroad Radicals in Cold War Mexico: Gender, Class, and Memory (Nebraska, 2013), argues that a national working-class movement emerged in Mexico during the 1950s, demonstrating the contested process of modernization in the postwar period.  This movement, which included major industrial unions as well as teachers, challenged the hegemony of the ruling party, influencing and anticipating the heralded student movement of the 1960s.  In the 1950s, these workers and their families sustained the largest strikes since those that preceded the Revolution of 1910.

Drawing on multi-site oral histories as well as previously unstudied company and government records, Alegre reconstructs community life and clandestine organizing during the Cold War.  His study shows how the legacy of the Revolution continued to shape working-class expectations during this period.  Finally, it is the first study to include railway women in the history of the industry and of the 1950s movement.

Professor Alegre is currently working on two projects. The first draws on judicial records, captains' logs, sailors' letters, and other maritime sources to reconstruct the mid-nineteenth century Pacific World during the Gold Rush, which attracted peoples from Africa, Asia, Europe, and Latin America to San Francisco, California. In particular, he is interested in how sexual violence emerged as an issue of concern in port cites along the Pacific rim of the Americas, as merchants, sailors, and adventurers traveled around Cape Horn and up the coast until reaching California. Preliminary findings were published in “Sodomitic Violence in Chile: Medical Knowledge and the Ambivalent Application of Law,” In Violence and Crime in Latin America: Representations and Politics, edited by Gema Santamaría and David Carey, Jr., 103-118. Norman: University of Oklahoma Press, 2017.  A Spanish-language edition will appear in 2021.

The second is a book-length survey of how organized ordinary people—as opposed to politicians and diplomats—experienced the Cold War in Latin America.  The book will be aimed at undergraduate students as well as the general public.

Dr. Alegre is committed to drawing on his expertise to further social justice initiatives in the community.  His advocacy around racial justice brought him to the attention of Mindbridge, a human rights organization that uses neuroscience to address state violence. He was elected chair of Mindbridge's Board of Directors in 2020.

Professor Alegre has been awarded two Fulbright grants for his research on Mexico, as well as grants from the Hewlett Foundation and Tinker Foundation, among others.

His scholarly interests also include the history of race, collective memory, and women's history.  If you are interested in taking one of his courses or just chatting about Latin America, feel free to e-mail him or to stop him in the halls.