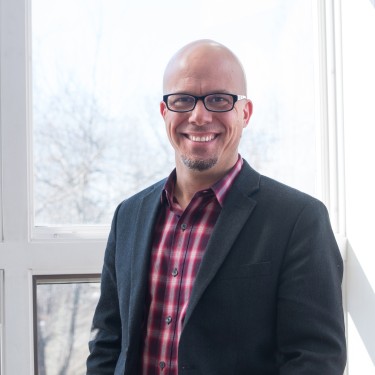 Sean Fitzpatrick leads strategy and implementation of UNE's priority marketing programs. This includes a central initiative to increase brand awareness and understanding among key audiences, as well as separate initiatives designed to support awareness and enrollment for select programs. Additionally, Sean is available to consult University departments and programs on individual marketing initiatives managed by those departments.

Sean is an award-winning marketing director and strategist with more than twenty years of experience on the agency and client sides. He began his career working directly with clients as a graphic designer, and focused on strategy and acount direction in his ad agency career, eventually serving as Account Director and Director of Client Services for such clients as AAA, Hannaford, Renaissance Hotels, Amtrak, Coldwell Banker, Auberge Resorts and more. Sean served as New England Director of Marketing for The Nature Conservancy for six years starting in 2008. There, he directed high-profile public engagement campaigns as well as communications and membership development programs. Sean came on board at UNE in 2015.

Sean earned an M.S. in Leadership from Golden Gate University. He studied at the University at Buffalo and California State University Los Angeles before earning his B.A. in Liberal Arts from Excelsior College. He lives with his wife and two daughters in a farmhouse in Freeport, Maine.