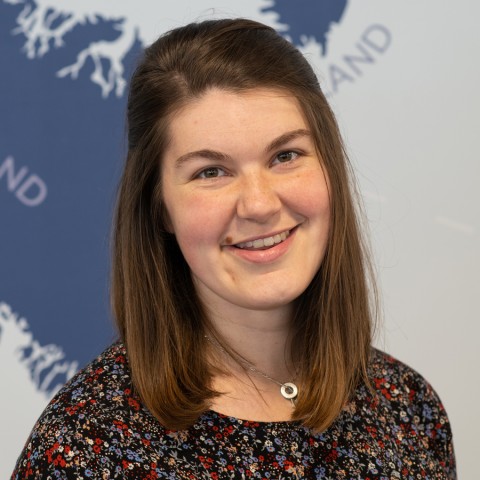 Striving to make a difference by hands-on experience

When Bailey Mortiz ’20 joined the Institute of North Atlantic Studies (UNE NORTH) Professional Science Master’s in Ocean Food Systems (PSM), she had already been around the world. Whether it was working with lobstermen in Panama, or interning in Madagascar where she worked one-on-one with sea cucumber and seaweed farmers, Bailey was able to get hands-on experience. She witnessed the impact of her studies first hand, and it inspired her to want to make a difference. A Seattle native, Bailey first came to Maine for her undergraduate studies at Bowdoin College. Majoring in Earth and Oceanographic Science as well as Environmental Studies, she showed a love of working in the field. Spending three years working for the Hurricane Island Center for Science and Leadership, Bailey gained in-depth knowledge of aquaculture in Maine.

After graduating from Bowdoin, Bailey looked for opportunities that would allow her to specifically dive into aquaculture knowing this was her interest. While exploring her options, she discovered UNE NORTH’s PSM — a course designed with an emphasis on academics as well as a focus on international experiential opportunities.

“Of all the programs I looked at around the U.S., UNE NORTH’s PSM was the only one that had such a strong tie with international programs. It was the only program that was meaningfully tied in with different global networks and institutions involved in ocean food systems on a broader level. That, and having a director like Barry Costa-Pierce, who has so much experience and a broad network of international associates and partners, is invaluable.”

Spending two weeks in northern Maine’s Cobscook Bay, the PSM students were able to gain first-hand experience from stakeholders and industry members who are working in, and affected by, ocean food systems. They took in perspectives from every side of the industry, hearing views both supporting and opposing new ventures. To deepen their understanding of the industry, students also spend two weeks in Iceland, learning from those at the forefront of the field. “Changes in the aquaculture industry go beyond textbooks, they directly impact the lives of countless people and could shift the entire fish industry,” adds Bailey. “This mindset is central to the PSM program and is at the heart of what I have been taking away from my experiences thus far. Many of the issues we've talked about are current issues. I have found that being immersed in topics that are happening right now without shying away from any controversies has given me new ideas and perspectives. Though I’ve been working in the field for a while, I hadn't thought about some of the perspectives that we've already gotten exposure to.”

Bailey is currently putting her studies into practice, working to build relationships between international seaweed farmers and those found here in the US. She hopes to be able to bridge the gap, helping to create a network that would allow these small businesses to distribute to more markets.

Having received a fellowship with the Henry L. and Grace Doherty Foundation, Bailey credits the foundation with allowing both her and her fellow scholarship recipients to thrive.

“I would not have been able to do this program if I didn't have the fellowship. The Doherty Foundation was willing to take a risk and invest in a very unique program. I'm really grateful that they were willing to support what many of my colleagues and I feel it is an approach with enormous potential. It’s not strictly biology; we’re really trying to learn about ocean food systems holistically. We’re working to be stewards of a new industry."

Many years ago, a serendipitous meeting during a four-day sea kayaking trip on Chesapeake Bay began a relationship that has yielded enormous dividends for the trajectory of marine science programs at UNE. Walter Brown, president of the Henry L. and Grace Doherty Foundation, found himself paddling with outdoor enthusiast and former advancement officer Nicole Connelly, whose description of UNE’s unique coastal campus and marine facility intrigued him. As one of the nation’s leading funders for marine sciences and education, the Doherty Foundation invests in institutions capable of robust oceanographic activities. After a September visit to the Marine Science Center and subsequent proposal, Walter and his fellow board members gifted $1 million to endow the Henry L. and Grace Doherty Chair of Marine Sciences at UNE. It was a momentous event in the University’s history.

Fast forward ten years later. Dr. Barry Costa-Pierce, recruited to become UNE’s first Doherty Chair of Marine Sciences after an international search, has helped shape UNE’s marine science program into a world-class operation in collaboration with his esteemed faculty colleagues. He recently transitioned to become the Executive Director of UNE NORTH. Not surprisingly, the launch of UNE’s unique Professional Science Masters in Ocean Food Systems recently attracted the Doherty Foundation’s renewed investment in UNE’s growth. With a $400,000 gift, the foundation is funding substantial tuition and travel support for 12 Doherty Fellows enrolled in the program over the next three years, providing these promising young people unparalleled opportunities for study offered nowhere else around the globe. With deep gratitude, we thank the Henry L. And Grace Doherty Foundation for the dividends their giving has yielded for UNE, its students, and the marine world.