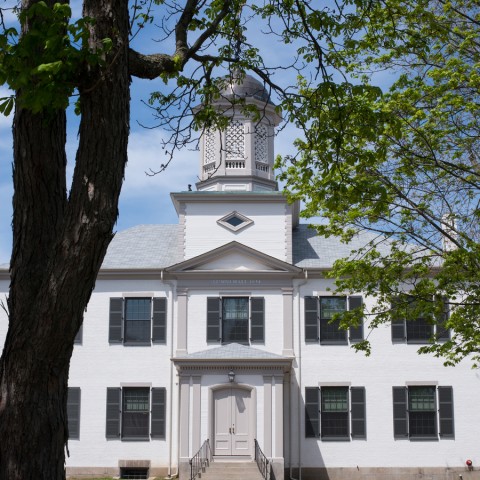 Alumna and Lifelong Donor Supports UNE with a Legacy Gift

Westbrook Junior College Class of 1951 alumna Florence McCashin's life was full of friendships, education and career success, and she viewed these as her legacy. Forever grateful for her Westbrook Junior College experience, McCashin was a loyal donor to the Westbrook College and UNE Annual Alumni Fund for nearly three decades. To honor her cherished experience, McCashin, who passed away in January of 2013, willed a major portion of her estate to the University of New England.

Florence McCashin, WJC ‘51 grew up in Kittery, Maine and at 34 years old, held the distinction of being the only WAVE (Women Accepted for Volunteer Emergency Services) Senior Chief Communications Technician in the entire US Navy. While attending Westbrook Junior College, McCashin met fellow classmate and lifelong friend, Shirley Powell Prouty WJC ‘51. The two connected quickly and would often be found studying together in Goddard Hall, going out on the weekends, and spending their holidays together at the Prouty estate in Massachusetts. McCashin even served as the maid of honor at Shirley’s wedding, delaying her initial deployment. After her graduation, McCashin had enlisted in the United States Navy. She then became a Seaman Apprentice in the WAVE. Later, she went on to graduate from the US Naval Training Center in Great Lakes, Illinois, and the Communications Technician Radio School in San Diego, California. McCashin spent a total of four years actively serving in the Korean War before transferring to the Navy Reserve. In her civilian capacity, McCashin served as a Communications Specialist at the US Naval Security Station. Her career and education were her focus, and with continued dedication and success, McCashin remained a member of the US Navy Reserve until her retirement.

With all that she experienced after college, even sixty years later, she still managed to call Shirley every week in order to reminisce about their good ‘ol school days. Her life was full of friendships, education and career success, and she was proud to be able to view these as her legacy as well as supporting WC/UNE as a donor and with a gift in her will.

Florence McCashin is a proud member of the University of New England Heritage Society.