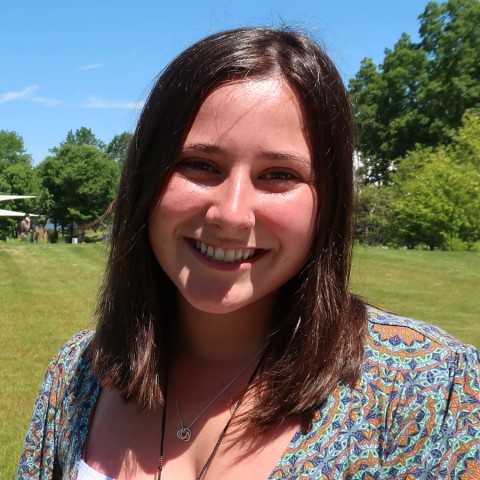 I had selective mutism as a child, a very rare childhood anxiety disorder. There are not a lot of doctors that specialize in that. I was fortunate enough to get help when I was young but most people don't get that opportunity so it’s common to get misdiagnosed and then develop more problems later. I want to give back what I was able to receive.

I am hopefully going to become a doctor. Anything that I can do to help people who struggle with what I’ve struggled with — that’s what I want to do. I want to make positive change.

The Neuroscience program at UNE is great because it offers a completely different perspective. Being on the pre-med track, I knew I wanted to study medical, but specifically, I am able to already hone in on what I want to do later on down the line by studying neuroscience and the brain. Being more specialized now, focusing on the brain and neuroscience, will help me later on in my work.

It is a smaller major in comparison to others at UNE, so you get a one-on-one style — because my class sizes are small, so I get a good look at things and the chance to chat directly with my professors. Neuroscience allows me to bring together subjects that I care about and see topics from a larger, combined perspective.

My favorite thing about UNE is the community — it gives people the ability to be themselves. Coming to UNE was a breath of fresh air. Everyone wants you to be yourself and lifts you up as you are. It’s a very positive environment. People want you to succeed here.

My first year, I went on an orientation trailblazer trip to Cow Island, and I absolutely loved it. I ended up staying pretty good friends with one of my Orientation Leaders (OLs), and they kept prompting me to get involved. So I applied to be an OL myself. It was really cool to be able to meet the incoming class of students and be able to see them grow and make the transition into college here.

After that summer, I knew I loved orientation, but I also knew that I love being on the inside of things somewhat — doing the backend stuff. So this year I was an Orientation Advisor. From the feedback that we’ve received, it seems like students loved orientation this summer, and that is so nice for me to see since it’s because of my hard work and the hard work of my peers. It was one of the smoothest sessions that’s ever happened with one of the largest incoming classes. It was just such a great dynamic.