The Gulls and Squirrels of Sarah Kelting 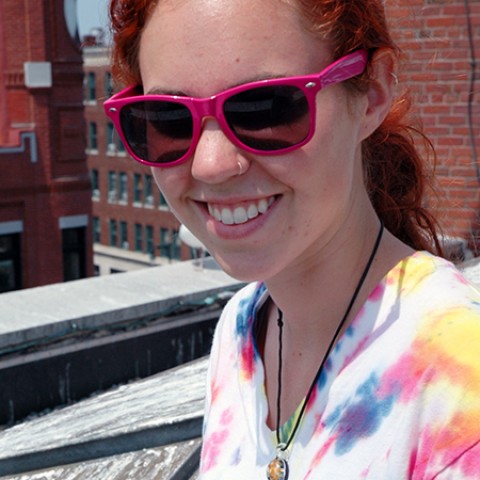 The Gulls and Squirrels of Sarah Kelting

People tend to see gulls only as pests because they can make a mess, explains Sarah Kelting ’14, a University of New England Environmental Studies major who has been conducting research on gulls.

“But people don’t see the good side of gulls,” Kelting says. “How the adults care for their young and how they live so long – for about 30 years. Gulls are a common mystery that no one knows about or takes the time to care about.”

Kelting, along with Sara Winchenbach ’12, an Animal Behavior alum, spent much of the 2012 summer working with Noah Perlut, Ph.D., assistant professor of environmental studies, and Margaret Friar, Ph.D., associate lecturer in biology, on the second year of a research project that explored the costs and benefits of rooftop nesting by herring gulls.

Kelting’s involvement in the project was supported by a College of Arts and Sciences undergraduate student summer research grant.

As people have pushed into prime wildlife habitat, they have displaced many animals by taking their nesting grounds. Frequently wildlife learn to live among us, which Dr. Perlut says is a very good thing.

“This is a native species that can make a mess,” he explains, “but they are so iconic - when you go to the ocean, you expect to see gulls. If you didn't see gulls when you were eating a lobster in Maine, something would seem amiss.”

While herring gulls traditionally nest on islands, a group of herring gulls has made several buildings in Portland its home. The Portland Museum of Art building, in particular, has attracted a large number of breeding pairs.

The researchers during the summer gathered data on nest success, clutch size, nestling growth, and the timing of nesting. They are comparing this urban population to an island population studied by researchers at Tufts and Cornell on Appledore Island, Isle of Shoals, off the coast of southern Maine.

In addition, the UNE team color-banded both adults and chicks to follow their dispersal movements and survival. They have received winter reports of birds that they banded on the Portland roof-top colony as far away as Dayton Beach, Florida.

During the second year of the project, the team had access to 11 rooftops.

“Gulls don’t seem to nest on the black rubber rooftops,” Kelting said. “They prefer rooftops that are covered with rocks, similar to their island habitats.”

Kelting, whose hometown is Enfield, Conn., has been involved in research since her freshman year at UNE.

“My research entailed the sampling of deep-sea sediment off the southern shores New Zealand and identifying microscopic fossilized organisms to be analyzed for their chemistry,” Kelting explained. “I was fortunate enough to receive a grant to continue with my research into the summer and enjoy Maine’s ‘vacationland’ in all of its glory. UNE has really helped me start building connections as well as a reputable resume from the get-go.”

During her third year at UNE, she has been working with Dr. Perlut on his ongoing Project Squirrel. Using mark-recapture techniques and radio telemetry, his team of student researchers has been exploring movement patterns and survival rates of the eastern gray squirrel on campus and the surrounding community.

“What I learned from my experiences at UNE is how to work with people to accomplish the research, Kelting says. “For the gull project, we had to ask building owners if we could conduct research on their rooftops, creating a situation of possible liability for them but still convincing them of the value of that risk. I learned a lot of life skills.”

She adds that her research has also “helped me adjust to change. I’ve worked with a lot of different projects with different faculty members and different students.”