The Many Passions of Aidan McParland 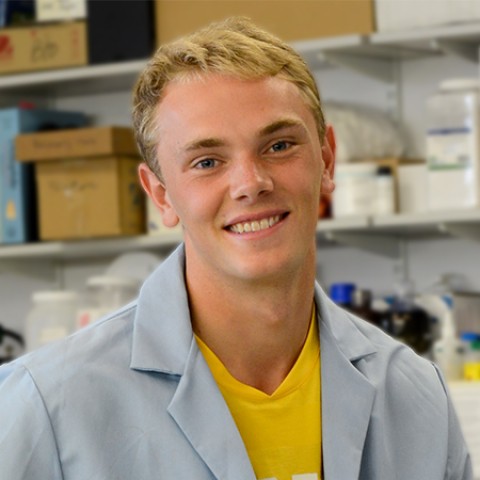 The Many Passions of Aidan McParland

For the uninitiated, TED conferences gather people from the technology, entertainment, and design arenas to share short but thought-provoking talks.

A TED enthusiast, McParland’s favorite talk is “The Intelligence of Crows,” in which the speaker shares a fascinating story of how crows were trained to pick up pennies and place them into a vending machine for a peanut reward through a cultural adaptation experiment.

“That video embodies what TED is — innovation through knowledge. With TED, if you have only 20 minutes, you can learn about anything,” says McParland.

Unable to attend a conference on his own, McParland decided to bring TED to UNE via its community-level version, TEDx. He and his fellow organizers lined up presenters for the November TEDxUNE, themed Inspiration. “We wanted to showcase the brilliance of UNE and our community,” he says. The group aims to host two TEDxUNE events a year.

McParland’s entrepreneurial vision began long before arriving at UNE. He picked up soccer at the age of 5 and began traveling as a goalie with the Canadian national training league at 14. In need of a flexible summer job after his sophomore year in high school, he heard about the government-sponsored Young Entrepreneurs Program, submitted a business plan for a soccer canteen, and was funded. He made some mistakes, took some good advice (“know your worth”), and evolved it into a successful snow cone and cotton candy enterprise called “the Boss of Floss” that netted more than $12,000 in its third season.

Now captain of UNE’s soccer squad, 2012 MVP, and male athlete of the year, McParland shares a similar philosophy on and off the field: “I don’t usually get scored on the same way twice. It’s the same scenario in my life. I think about what I will or won’t do the next time. It’s never too late to make something right. Everyone on this planet has been given an amazing opportunity to be here, to fix
the future.”

McParland’s eye on fixing the future is rooted in past experiences. He took a year off after high school and traveled around the world with his father, a geologist who wanted to introduce him to his field of work. They saw lava flows in Hawaii (where McParland learned to surf), toured the back country of Australia and New Zealand in a pop-up camper, and explored the jungles of Ecuador, where McParland met several doctors working in impoverished areas.

“That’s when I decided that’s what I want to do. I’ve always wanted to work with people to make a difference, and I believe I can do that with medicine,” he says.

He began working in Dr. Geoffrey Ganter’s lab his freshman year, studying the mechanisms behind pain, an area he continues to pursue enthusiastically. “Research opportunities at UNE are completely unique. I have friends at Harvard, Yale and the University of British Columbia, who are very jealous of the research work I do here.”

While he is leaning toward medical school and a career in emergency medicine, McParland, an avid surfer, is also considering ways he might connect that with his other love and major—Oceanography.

He ponders a future practice related to ocean healing. “When I’m sitting on my board and looking back at the land, it clears my head and changes my perspective on everything. It’s where I do my best thinking. I think that would be a neat thing to pass on.”