Deqa Dhalac, M.S.W. ’17, South Portland’s newest mayor, is a ‘voice for the voiceless’

Deqa Dhalac’s life is all about relationships — friendships, motherhood, bonds with the marginalized, and strong ties to her community.

Those relationships are what allowed her to thrive here after fleeing the Somalian capital of Mogadishu some 31 years ago; starting a life in the U.S.; earning not one but two master’s degrees; and working her way up to becoming the nation’s first Somali-American mayor when she was selected as the mayor of South Portland in December.

For Dhalac, a 2017 graduate of the University of New England’s Master of Social Work (M.S.W.) program, the road to becoming mayor of the state’s fourth-largest city was mostly without fanfare. But a passion for helping others was the driving force. 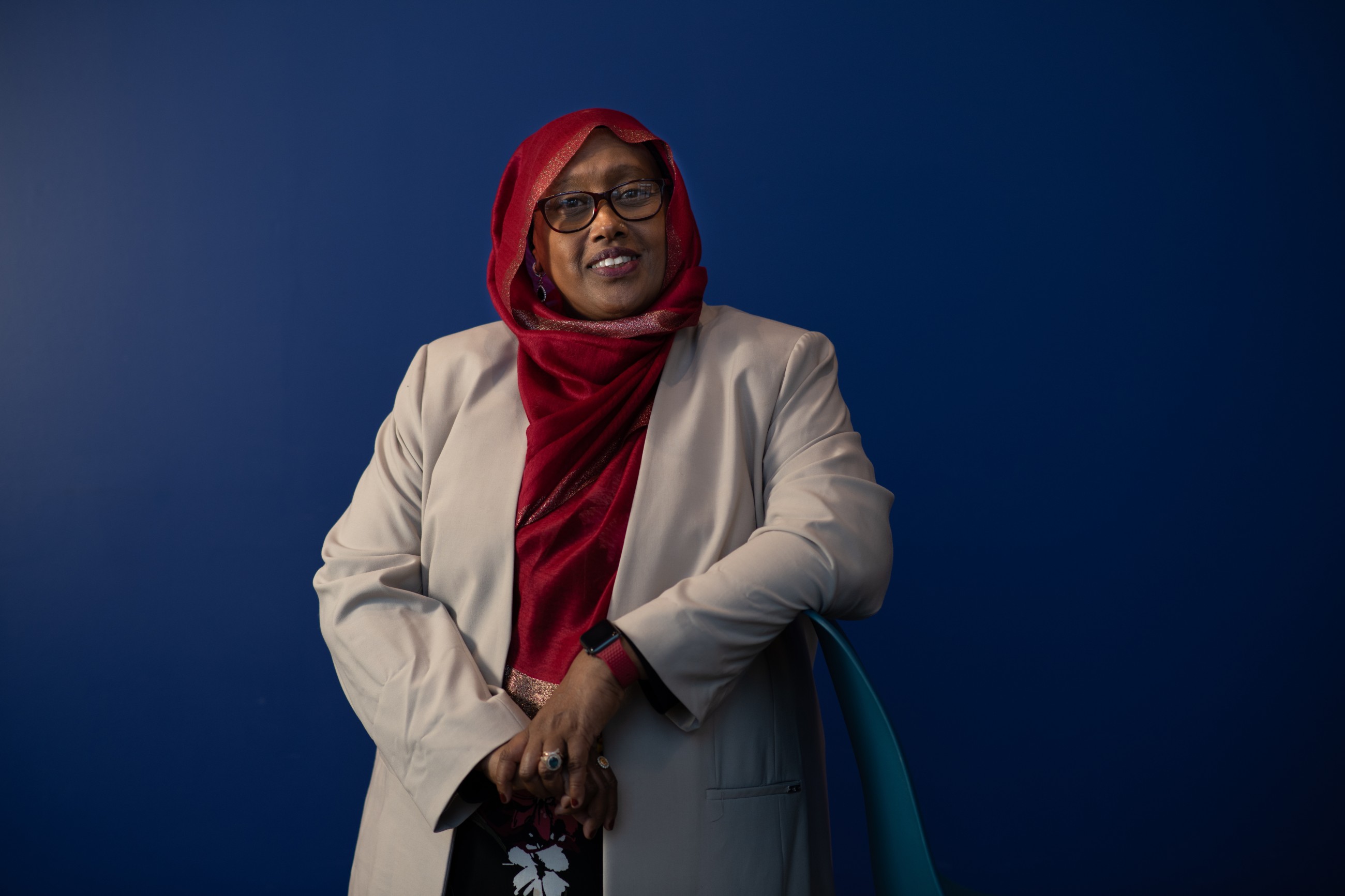 Dhalac had already earned a master’s degree in community development policy and practice from the University of New Hampshire and was working as a case worker for Portland’s Refugee Assistance Program when she first heard about the University's M.S.W. program from a UNE intern.

“I’d already been doing social work for nearly 20 years at the time, but I didn’t have a degree,” she explained. “I thought, ‘This is it. This is the perfect time.’”

She applied the next day.

“When I got in, I learned so much,” Dhalac reflected. “The program teaches you how to connect with people, how to build community, how to craft policy if you want to, and look at things in a macro sense. I was blown away.”

Following her graduation, Dhalac was working as the intercultural program manager for the Maine Center for Grieving Children. She knew from her studies at UNE that grief comes in many forms: the death of a parent, the loss of a home, the emotional toll of fleeing political oppression.

"I’ve worked with kids who came here as asylum seekers who, not even two days after leaving their home countries, are here in cold, snowy Maine,” Dhalac recalled. “Those kids don’t always get the information they end up needing when they come to a new place. They’re mourning their friends, schools, and families, and nothing is normal to them anymore.”

“It really affected me,” she added. 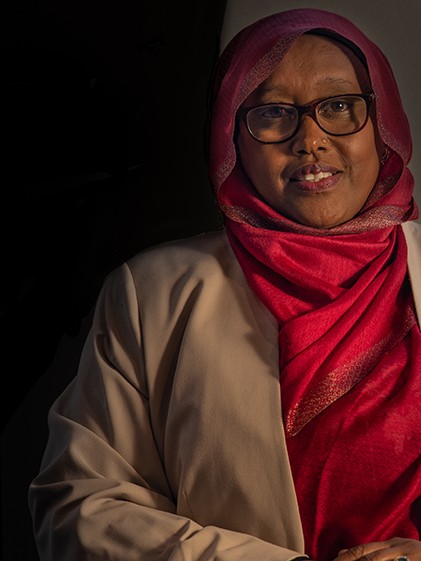 She also saw many forms of grief in her community — addiction, homelessness, struggles with mental health, and racism among them.

“Humans are human,” she said. “There are white, rural Mainers who are poor; we have people suffering from substance use disorder; we have people who are suicidal. I also learned that, as immigrants, we are not immune to these issues. I have never smoked a cigarette in my life, and I’ve never drank alcohol, but I was able to understand how to support people with addiction. That understanding was a tool I learned from UNE to support and help those in need whether they be in my community or outside of it.” 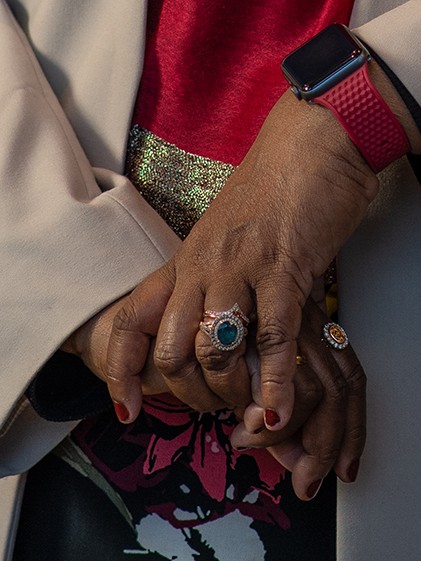 Dhalac knew change could be made, but she, at first, didn’t imagine herself running for office. It was at the urging of a friend that she took the steps to dip her toes into the political waters.

“There were a lot of voices that weren’t being heard — marginalized communities, communities of color, poor communities, LGBTQ folks, Black community members, and young people whose voices were not there,” she said. “I knew we needed to do something, but, as a woman — a Black, immigrant, Muslim woman — it never occurred to me that I could run for office.”

That was when a friend told her about Emerge Maine, an organization that recruits, trains, and inspires Democratic women to run for public office in Maine. She learned how to canvass, to secure signage, and expand her political network. She got a campaign manager and enlisted state legislators to help her cause. Still, despite all her training and hard work, Dhalac still doubted herself.

This was the era of Trumpian politics and rhetoric, increased nationwide racism and xenophobia, and travel bans for Muslim-majority countries; they were not the easiest times for someone like Dhalac to persuade voters in the nation’s whitest and oldest state and in a city that was 90% white.

"There was nobody who looked like me in office in Maine when I ran for City Council. That’s why I did it.” – Deqa Dhalac

“I talked to my oldest child, and he reminded me of all my identities as a Black woman, immigrant, Muslim woman, and graduate, but he also said, ‘Mom, people might not be nice to you,’” Dhalac recalled. “He said, ‘I don’t think you should [run for office].’

“But my two younger kids told me I had to run because of all of those things,” she continued. “They said everybody who looks like me, who speaks like me, and who dresses like me will say that, ‘If she can do it, I can, too.’ There was nobody who looked like me in office in Maine when I ran for City Council. That’s why I did it.”

The reward outweighed the risk. It was 2018 when Dhalac was elected to the South Portland City Council. At the time, it was believed she was the first African American and first Muslim person to be elected to the governing body. After three years on the council, advocating for affordable housing, quality education, and a clean environment, Dhalac was selected to become mayor of South Portland by her peers, an experience she described primarily as “humbling.”

“It was scary, exciting, and so many other emotions, but it was humbling more than anything else,” she said, “to have your colleagues say they think you can do a good job, that they trust you, and that they choose you. I was honored.”

Dhalac began her yearlong term in December not with the goal of radically changing the city government but with the hopes of carrying out the council’s goals for 2022.

Such goals include increasing affordable housing in the city; mitigating climate change and promoting sustainability, notably through the city’s One Climate Future initiative in partnership with neighboring Portland; increasing diversity, equity, and inclusion in the community — for example, by hiring more people of color; and addressing the coronavirus pandemic.

One of her first acts as mayor, she said, was working with the City Council to approve a citywide indoor mask mandate to mitigate the spread of COVID-19. “Some people are angry, and some are happy, but we, as public officials, have to do what we have to do to make sure people are safe. That’s what they hire us to do.”

"It doesn’t matter the color of their skin. I want people to look at me and see that, if I can do this, they can too. It’s hard work, but it’s rewarding to be the voice of the voiceless.” – Deqa Dhalac

Dhalac sees her success as a testament to hard work, determination, and the power of community action. But despite the national press of her election, the distinction as America’s first Somali-American mayor, and the 11th woman to hold the position in South Portland, Dhalac stays humble about her accomplishments.

She hopes her new status as mayor inspires young people to become active in their communities, join city committees, learn how local government operates, and — if they feel ready — run for office.

“I want people to not be scared if they want to try something — anything — especially young people,” she said. “It doesn’t matter the color of their skin. I want people to look at me and see that, if I can do this, they can too. It’s hard work, but it’s rewarding to be the voice of the voiceless.”