Witch theory do you buy?

It is not unusual for witches to be top of mind on Halloween, and, for most of us, our Halloween-inspired thoughts of witches conjure images of the cartoonish figures from children’s stories and movies: haggard old women with a pointy black hats, wart-covered faces, and broomsticks in hand.

Not so for students in one particular class taught by Elizabeth DeWolfe, professor of history. Members of her What Really Happened? Women, Witches, and Witch Hunts class were, indeed, thinking about witches on Oct. 31 — but in an entirely different and far more serious context. Gathered in the Saint Francis Room on the afternoon of Oct. 31, the class’s 14 students, grouped into five teams, presented a modified Oxford-style debate to the UNE community to put forth possible historical explanations for the tragic events that occurred in the early 1690s in Salem Massachusetts — events involving the investigations and persecutions of people suspected of being “witches” and resulting in the imprisonment of more than 150 people and the execution of 20.

“Salem 1692: A Debate,” opened with a brief historical overview by DeWolfe before students began presentations on five different, well-researched theories as to the cause of the Salem witch hunts and subsequent court trials.

Madison Kruger, Samantha Luecke, and Kayla Midolo, members of Team Psychology, argued that Salem’s witch hysteria was the result of the accusers’ psychological disorders and that their actions stemmed from defense mechanisms — namely displacement, projection, and repression — all of which, the team claimed, led to accusations of others that were legitimized through the irrational and dysfunctional reasoning of “group think.”

Team Economics, composed of Brianna Ordway, Maddy Jemiolo, and Brian Will, asserted that the events in Salem were born out of economic conditions. They explained that the period immediately preceding the witch hunts was one of economic turmoil. Crops in the area had failed, and the resulting financial stress, they contended, led to arguments between families, primarily between the relatively poor farming families in Salem Village and the wealthier families in Salem Town. Inter-family strife stemming from financial hardships led to accusations of witchcraft, they maintained.

Emily Newborough, Tommye Wall, and Kaylee Blake on Team Tituba posited that it was the presence of Tituba, a Caribbean native slave, in the household where three young girls first demonstrated “bewitched” behaviors that enabled the theory of witchcraft to take hold in Salem. They reasoned that because Natives were long associated with witchcraft by the Puritans and that Tituba had issued a (likely forced) confession to putting a spell on the girls, she was primarily responsible for the mass hysteria that ensued.

Hallucinations resulting from a medical malady was the cause of the frenzy in Salem, claimed Team Medical, made up of Zinaida Gregor, Ryan Sears, and Hailey Goodwin. Team members explained that rye was the principle grain ingested in Salem during the time the witch craze spread through the population. They alleged that as the result of a particularly wet spring and the fact that the majority of Salem’s rye was grown in a swampy location, an outbreak of the ergot fungus, which has hallucinogenic properties, made its way into the food supply and caused accusers to think they saw things that they didn’t really see, leading to false accusations that spiraled out of control.

Team Warfare, consisting of Candace Baker and Meghan Hanks, insisted that at the very root of Salem’s witch preoccupation was King William’s War (also known as the First French and Indian War), which was an armed battle between England and France in the New England colonies over the control of North America. Taking a comprehensive view, the team conceded that all of the other theories suggested during the debate had merit but asserted that every one of them was dependent, at least in part, on the recent warfare that had ravaged the area. Noting that all three of the “bewitched” girls whose behavior first roused suspicions of witchcraft were war refugees, they explained that the girls likely had psychological disorders as the result of post-traumatic stress. Moreover, the economic turmoil that led to inter-family squabbling, they said, was partly the result of war-induced financial difficulties. (Among other war-related economic hardships, the colonists were forced to pay excessive taxes to help England finance the war.) In addition, team members made a case that the hatred and distrust of Natives intensified during the war, as both England and France had help from Native American allies, likely fueling the fire of suspicion around Tituba, the Native slave. And finally, wartime food shortages, resulting from intentional crop destruction as a means of warfare, they said, led the community in Salem to rely on the local blighted rye crop more than they otherwise would have.

After making their opening arguments, the teams engaged with one another directly, attempting to poke holes in their competitors’ theories. Their discussion was guided by cases made in the opening statements as well as by questions posed by DeWolfe, as moderator. A question-and-answer period followed, during which audience members could seek clarification from the teams. After a two-minute closing statement by each team, the debate was wrapped up, and audience members were invited to vote for the team whom they found most convincing.

The winner? Team Warfare. As a member of the triumphant team, Meghan Hanks ’23, an environmental science major and art minor, pointed to the all-inclusive nature of her team’s theory as the likely reason for their victory. “I think we might have won because our argument nicely explained a reason for all the different possibilities,” she shared. After the debate, even members of other teams noted that, personally, they felt the warfare theory is most plausible. Brianna Ordway (Elementary Education, ’23) of Team Economics stated her reaction to Team Warfare’s claims. “When I heard the warfare team’s closing statement, it made so much sense to me,” she said. “The Salem witch trials were not caused by one singular theory but by multiple factors. Every theory fits and explains some aspect.”

Utilizing a debate structure to learn about a historical event seemed a creative and effective teaching tool that the students enjoyed. “I had never done this type of project in college, and it was a new way to deeply learn about all the theories for what happened in Salem,” Hanks commented. “We really had to understand everyone’s point of view in order to be prepared to answer people’s questions.”

DeWolfe was pleased with the event and impressed by her students’ preparation. “All the teams did themselves proud,” she stated. “All semester, these students, most of whom are not history majors, have grappled with very challenging late medieval and early American colonial writing on religion, the law, medical ideas, and witchcraft. But all of the groups were able to pull out the salient points and present well-reasoned, evidence-based arguments.” 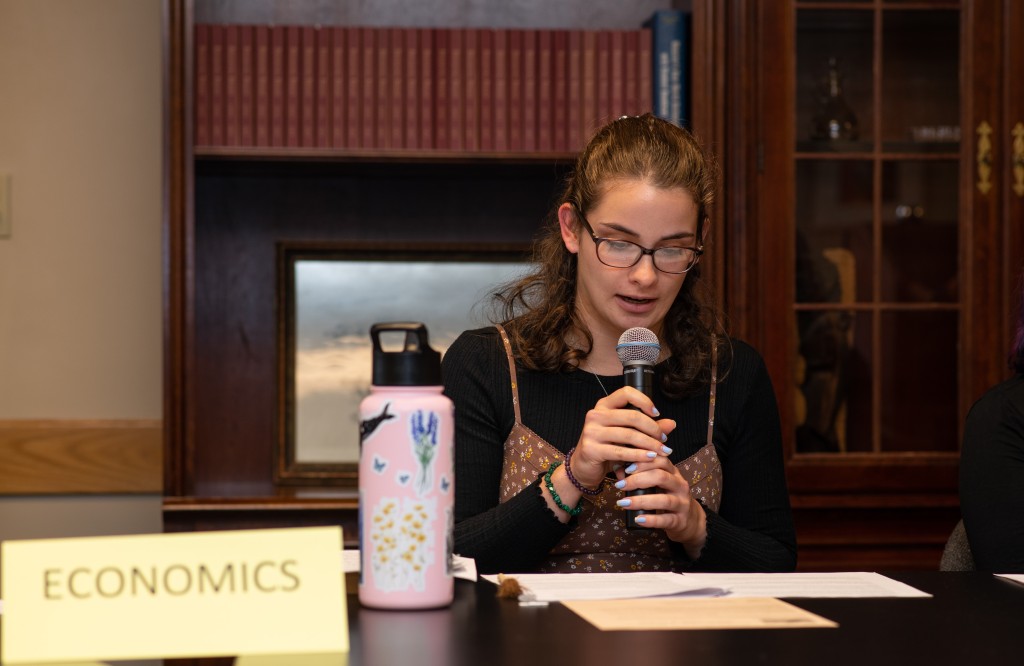 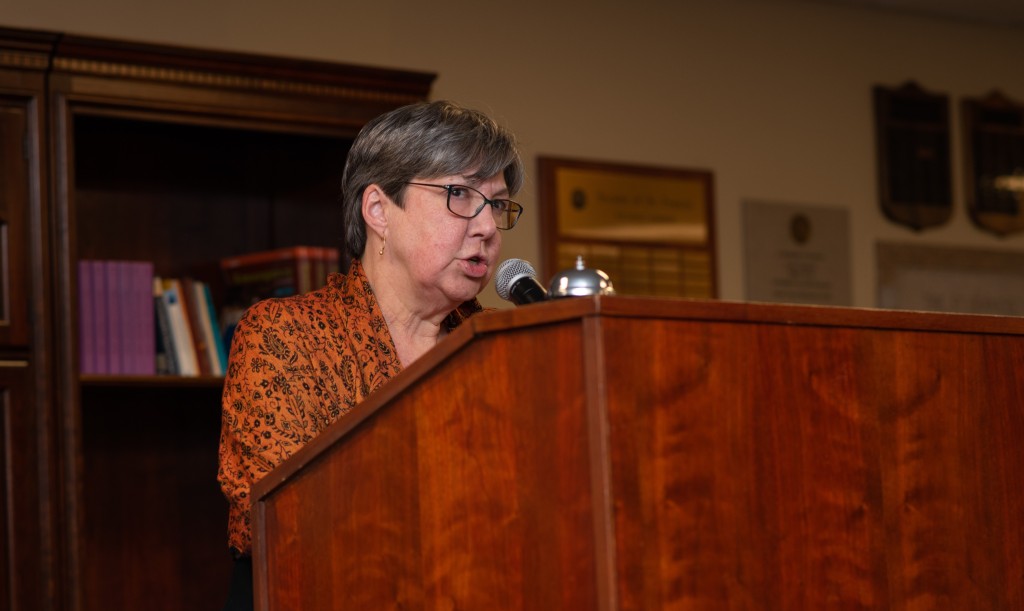