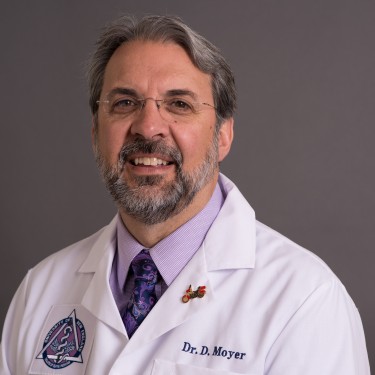 Dr. Moyer joined Oral & Maxillofacial Surgery Associates in 1989 upon completion of his residency in oral and maxillofacial surgery at the University of Nebraska Medical Center. He graduated from Muhlenberg College with a BS in Biology in 1979 and continued his education at Temple University Dental School, obtaining his DDS with honors in 1983. Subsequently, he completed a fellowship in anesthesia at the Medical College of Pennsylvania in 1984. His MD was completed with honors in 1987, also at the University of Nebraska Medical Center.

Dr. Moyer is an active participant in local, state, and national organizations. In 1998, he served as president of the Maine Dental Association, and he now serves on the Maine State Board of Dental Examiners. His interest in anesthesia led him to become appointed to the AAOMS Committee on Anesthesia and the Board of Directors for the American Dental Society of Anesthesiology. In 2013, he was inducted to the American College of Surgeons as a fellow. On the local level, Dr. Moyer holds staff positions at both Mercy Hospital and Maine Medical Center. Dr. Moyer became board certified in 1991 and recertified in 1999 and 2009. His teaching experience includes a position as an assistant clinical professor at the University of New England, as well as delivering numerous lectures to professional groups nationally and physicians and organizations locally. He is also an ACLS instructor for the greater Portland area.