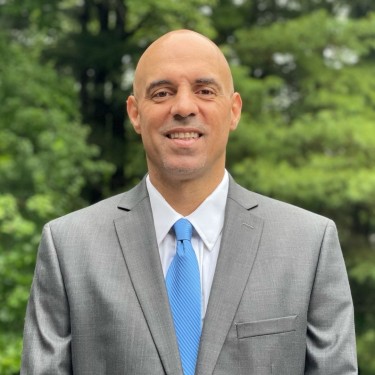 Silva and his wife, Cecily, live in Biddeford with their three children — son Julius, and twin daughters Gabriella and Natalia. Silva is serving a second three-year term on the NCAA Regional Advisory Committee for the Division III Northeast region.

Silva has led the UNE men's basketball program for nine seasons, including a very abbreviated six-game slate in 2020-21. During his time, the Nor'easters have five of the program's 10 Commonwealth Coast Conference (CCC) postseason tournament appearances. In back-to-back years (2014-15, 2015-16), the team reached the semifinal round with upsets of top seed and second seed, respectively. The win in 2015-16 secured the first overall winning record (14-13) for the UNE in seven seasons. In 2017-18, the Nor'easters finished the league slate with a positive mark (10-8) for the first time in eight seasons and took the fifth seed into the postseason. In 2019-20, the squad had a 13-12 overall ledger.

Check out this June 2020 Spotlight on Silva.

Silva came to UNE from Elms College [NCAA III], after assembling a 206-103 record over 11 seasons at the head of the Blazer bench. Under his direction, Elms won seven consecutive league crowns in the New England Collegiate Conference (NECC) from 2005-2011, leading to six NCAA Championship appearances during that time. Inheriting a team that went 2-21 prior to his arrival, Silva had the Blazers in the NCAA Championship four years later. More recently, in 2008-09, he guided Elms to a program-record 26-2 mark and the school's first national ranking. The Blazers peaked at No. 12 in the national poll that season while leading the country in steals per game and scoring margin. The following season Elms captured the Eastern College Athletic Conference (ECAC) New England Championship. Silva was also a faculty member on top of his coaching duties at Elms.