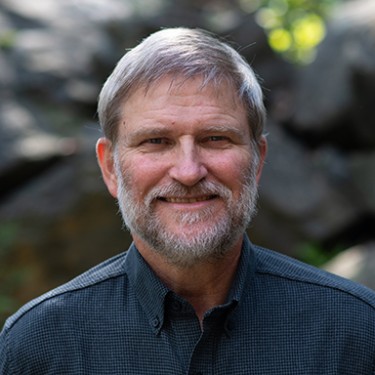 The moniker "Dr. V" is in veneration to his late father, an outstanding teacher in the Concord Massachusetts school system who went by the name of "Mr. V."  Dr. V teaches general physics and undertakes research in molecular self-assembly of four-stranded DNA and physics education.  He graduated Magna Cum Laude and Phi Beta Kappa from Clark University with a dual major in chemistry and physics in 1982.  He graduated with a M.Sc. and Ph.D in physics, with an emphasis in biological physics, from the University of California, Davis in 1989.  Dr. V's post-doctoral training included research at the Institute for Molecular Biology and Signal Transduction Training Group at Iowa State University.  He published nearly 50 articles and received patents for developing the scanning probe microscope (SPM) for use in high resolution imaging of biomolecules and developing techniques to reconstruct true surface topography due to probe artifacts.  Dr. V was an assistant professor in the Department of Physics at California State University Fresno (CSUF) in 1995, continuing is four-stranded DNA research and establishing a California State University-wide scanning probe microscopy facility.  He began teaching general physics and continuing both lines of research at the University of New England in 2000.  Dr. V has received funding from the Research Corporation and National Science Foundation to set up scanning probe microscopy facilities at CSUF and UNE.  His recent undergraduate research examined the auto-orientation of the self-assembled four-stranded DNA on the surface of phyllosilicates[i].  Recently, he returned from a year-long sabbatical leave in Germany where is received training in decorating quadruplex DNA with gold nanoparticles and DNA origami construction. All of Dr. V's 17 graduated research assistants have gone on to professional schools, primarily to study medicine.  He collaborates with Dr. Eva Balog in conducting high resolution SPM analysis of DNA thanks to securing a super sensitive Asylum Research Cypher environmental SPM funded by an NSF Major Research Instrumentation grant to Dr. Balog.

Dr. V's teaching style is strongly influence by research-based "modeling instruction".  This approach to physics learning is based on guided inquiry and Socratic questioning, compelling students to confront physics misconceptions and construct knowledge based on the scientific method.  A four-year study involving the results from research-based assessments involving CSUF and UNE students clearly established the efficacy of modeling instruction over traditional physics education[ii].  Dr. V continues his physics education research, successfully persuading the UNE administration to switch from the traditional lecture/lab format to "studio physics" in which both lecture and lab are taught in the  more intimate setting of a laboratory classroom.  The instruction has been highly influenced by the latest developments in Physics Education Research (PER) including adoption of many lab activities on fluids that were outcomes from Dr. V's NSF funded research in PER.  In particular the studio physics instruction at UNE is undergoing a change to include more Introductory Physics for the Life Sciences because over 95% of UNE physics students major in either health of life sciences.  The content is geared more towards authentic biological applications of physics, a growing part of PER research at UNE.

Phase III Modeling Instruction Training. UC Davis a long time ago in a galaxy far away...