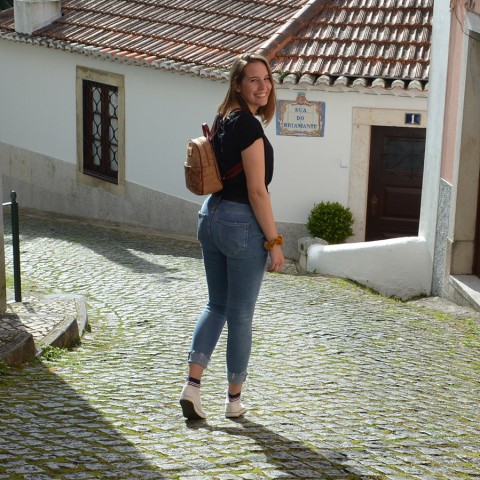 UNE was my first choice in New England because I had a really keen interest in Maine in general. I think it’s beautiful, so the first thing that I was looking for was a beautiful campus, and UNE is absolutely stunning.

The first thing that stuck out to me when I toured UNE was the friendliness of the staff and the close integration of the students. Compared to other campuses that I visited, the students here were the nicest and friendliest. Everyone seemed more academically focused too. All of the students who I talked to while touring seemed to put academics first, which I liked.

I love travel, and history is a big part of that. Both History and Global Studies are strong programs here, and I like the broadness of studying the humanities. I study history and political science of course, but I also study international relations, anthropology, cultural studies, and more. It is all interconnected. I don’t think I really consider myself to have a double major and a minor because it all feels like one package deal to me. I think that there is a lot to benefit from global studies, but I also think that it’s important to understand the world and its different cultures and people.

Last year, I studied abroad in Paris, and while I was there, I got to work with the global education department a little bit. I’m leaning towards a global education career now. Because I’ve lived abroad, I've experienced people helping my family try to get over there and set that up for us and then experienced it again when I went abroad to Paris for a semester. It’s important to me to be able to make that same positive difference in other people's lives.

I originally chose UNE’s study abroad program in France because it was more political science-directed. It’s a newer program, and it’s set at a graduate school there. I knew that would be challenging for me, and that was exciting. The classes were incredible. I can’t put into words how amazing the experience was overall.

The professors were so smart, and so were the students. My peers ranged from people just a little older than me to people in their fifties trying to get their doctorate degrees. It was energizing to be among so many scholarly people, some of whom were even writing their theses. The school was amazing.

In the beginning, we ventured out around Paris a bit timidly, but by March, we felt settled and part of the big city. We were swiping our cards to get on the metro and knew which lines to take; we knew how to get to school and the Eiffel Tower; and we even picked up some shortcuts for getting through our neighborhood. We had the hang of things. I think that’s my fondest memory of being there. It was the moment when I realized that I had made my own home there. I knew my way around. Once we were comfortable in Paris, we took our first trip to Belgium. It was about a two-hour train ride. Then we went to Brussels next, and then we planned a big spring break trip. It was such a great opportunity to see new parts of the world.