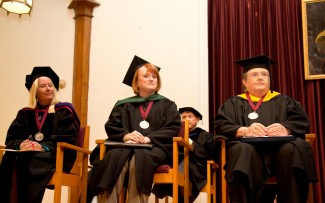 The 59th Deborah Morton Society Convocation and Awards Ceremony will take place on October 12, 2021 at 11 a.m., on the Portland Campus.

The Deborah Morton Awards are presented each year by the trustees of the University of New England to outstanding women who have achieved high distinction in their careers and public service, or whose leadership in civic, cultural or social causes has been exceptional.

The Deborah Morton Award was first presented at the 130th anniversary convocation of Westbrook College in 1961. It was the first annual award in Maine to honor women's achievement.

It was named in memory of Deborah Morton of Round Pond, Maine, valedictorian of the 1879 class of the Westbrook Seminary — the forerunner of Westbrook College, which merged with the University of New England in 1996.

Morton was a teacher, dean, linguist, historian, and prominent Portland civic leader whose service to Westbrook College spanned more than 60 years. Since 1961, more than 180 distinguished women have been honored with the award.

The society also actively fundraises to support the Deborah Morton Endowed Scholarship, awarded annually to women students who are Maine residents who have manifested outstanding qualities of character, leadership, and academic ability and are entering their undergraduate senior year enrolled in the Westbrook College of Health Professions programs on the Portland Campus.