Thrown Into the Flames of COVID-19, UNE COM Class of 2020 Advances Onward. Virtually.

“We are the class minted by the greatest pandemic the world has seen in a century. I cannot think of a more fitting time to graduate into the medical profession,” Lauren Ferguson, D.O. ’20, said confidently at the University of New England College of Osteopathic Medicine’s Commencement ceremony in May.

The ceremony was different than in years past. For one thing, the student Commencement address is usually presented to a packed concert hall at Merrill Auditorium in Portland. But this year, few people heard Ferguson’s words in person.

Instead, Ferguson, president of the UNE COM Class of 2020, spoke into a camera lens, her speech recorded in advance of the ceremony’s airing. The crowd of friends and family members normally in attendance was replaced by a select few University administrators, COM faculty and staff, and videographers from the Office of Communications. The champagne was poured at home, rather than in busy downtown restaurants. 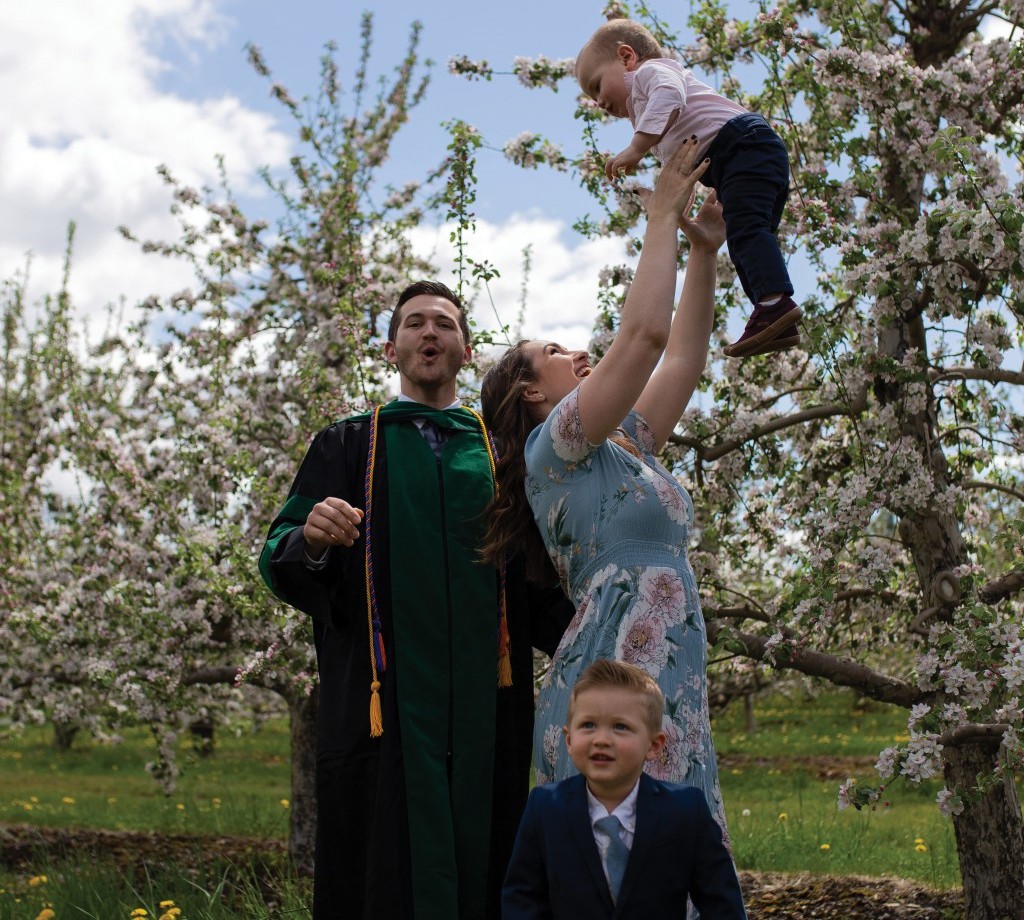 David Shbeeb, D.O. ’20, remotely celebrates his graduation from UNE COM with his family.

We already live in a digital world, and we were entering a new version of that. We were willing to experiment to create a program that would be as close to what our graduates would experience, in person, at Merrill Auditorium.”

It was the first virtual graduation ceremony in the college’s 40-year history, held in wake of the novel coronavirus pandemic, which, in March, resulted in the suspension of UNE’s on-campus activities. When, in May, cases of COVID-19 soared in southern Maine, it became evident that there was no other choice: Commencement had to be held online.

“Keeping the spirit of a conventional Commencement ceremony was pretty paramount because we still wanted to make sure these folks had a special experience,” said Vin Buonocore, M.Ed., assistant dean of Recruitment, Student, and Alumni Services for UNE COM.

The decision was made to host Commencement using a combination of pre-recorded video and live streaming through the video teleconferencing service Zoom, which became an incredibly familiar tool for all members of the University community since UNE’s transition to online learning.

Following additional addresses — during which the graduates were reminded of their roles as medical professionals amidst the backdrop of a global virus outbreak — the graduates’ names were read off as they appeared one-by-one on the screen. Donning their regalia as if nothing were out of the ordinary, most of the physicians-to-be were surrounded by their families. Some were hooded by their parents, some by their children, and some by their siblings. Others held their babies; their partners stood at their sides. Pets even took starring roles, with some dressed for the occasion.

Many graduates toasted with the aforementioned champagne, served in a custom UNE COM flute, celebrating a long four years of dedicated work to answer the call of medicine. People hugged, they laughed, and they shed tears of joy. All smiled as they recited the Osteopathic Oath, certifying their path onward to residency.

This was the first time that family could really be a part of a ceremony. Typically, they take a passive role in just viewing Commencement in the audience. But this year, they took a more active role,” said Solebello. “You could just feel the smiles and excitement and how proud the parents were.” 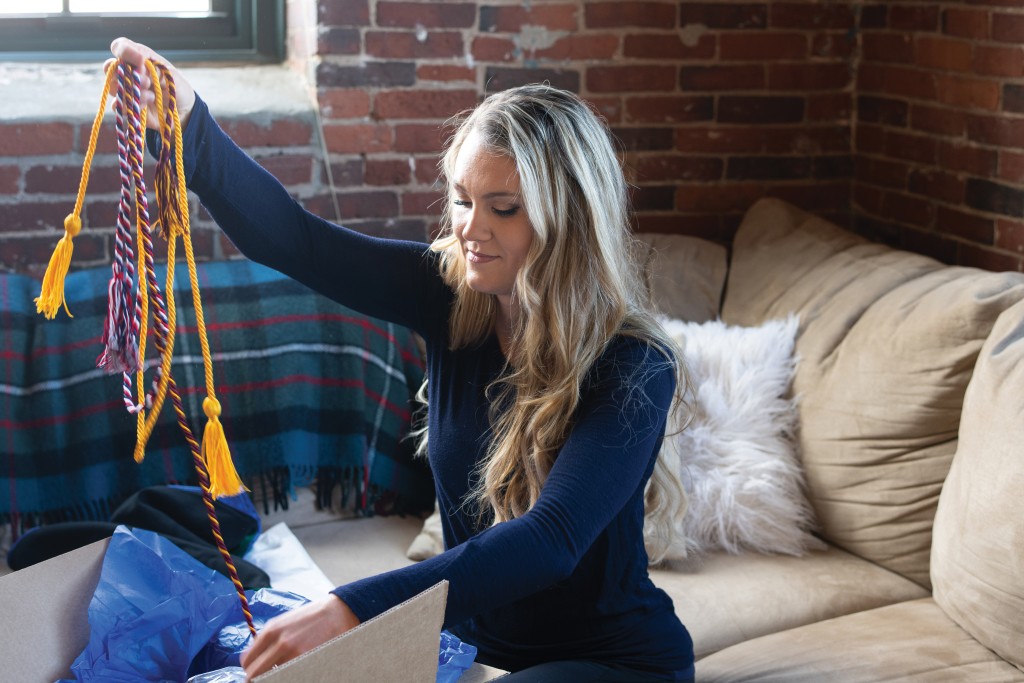 Lauren Ferguson, D.O. ’20, holds her Commencement cords, which were shipped to her home prior to the virtual ceremony.

“I think we were all kind of pleasantly surprised with just how personal this was,” said Buonocore. “It was as special, or maybe even more special, than what has typically happened in the past. It was really worth the extra stress of planning to make this happen.”

The participation of family made this year’s ceremony all the more special, said Marly Solebello, M.Ed., coordinator of Alumni Services and Event Planning for UNE COM.

Commencement was not UNE COM’s first foray into digital contingency planning, but it was their first to combine pre-recorded material with live components.

In March, the college held its first virtual Match Day ceremony, an annual event that marks the date when students learn where they will be completing their medical residencies. It is a highly competitive process as students vie for a limited number of resident programs — against students at other schools — across the country.

Rather than collectively celebrating their matches at the Danielle N. Ripich Commons in Biddeford, the soon-to-be graduates viewed a pre-recorded series of speeches on Facebook Live and were encouraged to share their joy in the comments. Eliza Foster, D.O. ’20, said at the time that the ceremony spoke to the resiliency of medical professionals and the college’s ability to adapt to unforeseen circumstances.

“I believe we have been prepared to play our role in the bigger picture, whatever that may be,” said Foster, who matched to a residency at Central Maine Medical Center in Lewison.

Our medical experiences, ability to adapt to change, and determination to come out on the other side more prepared and knowledgeable will serve us well as we start our medical careers in the midst of the coronavirus pandemic.”

Supporting Foster’s claim are the UNE COM 2020 match rates for residencies — this year, more than 95% of UNE students were chosen for hospital stints, a rate higher than the national averages for allopathic and other osteopathic medical schools. In total, 164 UNE COM students matched to residencies in 16 specialties across 27 states, including programs in family medicine, internal medicine, and pediatrics.

The Match Day ceremony was a success, but it lacked the camaraderie of years past. Buonocore said he wanted to change that for Commencement. For him, it was also a sentimental ceremony — the Class of 2020 was the first he came to know upon his arrival at UNE in 2017.

“It was important to me that we do something special and that the students knew we were working hard to provide the best possible experience. They worked the majority of their lives to become doctors; we had to do something to recognize that,” Buonocore said. “We knew Zoom could work, and it was worth a possible malfunction to give each student the chance to be in the limelight for one single moment.”

The first of seven total virtual Commencement ceremonies, UNE COM’s graduation served as a model for the University’s other colleges, which held their graduations about a month later in mid-June.

“It was nice to serve as a resource for others. We at UNE COM are definitely a group who likes to try new things and experiment with technology. This was an opportunity to try something new with one of those events we typically don’t get to play around with,” Solebello said. “I think that really speaks to the way we try to collaborate and develop ways to support our students and make things really special for them while they’re here.”

“Our primary focus was how to make this ceremony memorable, something our students could be proud of,” she added. “I think we did that.”

Reached by phone after the event, Ferguson, originally of Huntington Beach, California, said she was at first disappointed to learn that Commencement would be held virtually but was also relieved to know the necessary precautions were being put in place to keep students safe.

“It was disappointing mainly just because I wasn’t able to reunite with my classmates, and we haven’t seen each other in a while since we left campus for clinical rotations,” she said. “But it was really heartwarming to see them all on Zoom. Do I still wish we could have all been there in person? Of course. But it still felt like I was sharing something with them, and I thought that was pretty special.”

Ferguson, a captain in the U.S. Air Force, was matched to a family medicine residency at the National Capitol Consortium, a military residency program, and started in June. She credited UNE COM for providing her and her classmates an education that could train them to meet the needs of today — which are significant.

“We graduated a great group of people with wonderful personalities and incredible motivation,” she said. “As we walk into the fire of this pandemic and face challenges our predecessors never could have envisioned, I hope we never lose sight of our osteopathic roots.”

Hooding of Candidates for the Doctor of Osteopathic Medicine

During the 2020 UNE College of Osteopathic Medicine commencement, the hooding ceremony, which ordinarily takes place on the commencement stage, was held remotely, via Zoom, in each degree candidate’s own home — performed by friends, family members, and the occasional dog or toddler. It made for a tremendously moving montage, as the candidates invited us into their personal space, and everyone made the most of the makeshift ceremony.