Students of color who are new to UNE this year had the opportunity to meet one another at UNE's inaugural Scholars of Color Breakfast, held on August 28.

On August 28, 2018, UNE hosted its inaugural Scholars of Color Breakfast as a way to welcome new students of color to the University. The event, organized by Erica Rousseau, director of Intercultural Student Engagement, kicked off with remarks from UNE President James Herbert, who introduced speaker Constanza Cabello, assistant to the president for institutional diversity and director of intercultural affairs at Stonehill College in Easton, Massachusetts.

The event gave first-year/transfer minority students a chance to mix and mingle and to meet several returning student leaders of color, who attended as well. The breakfast also provided an occasion for the students to learn about UNE’s history of inclusiveness and its plan for promoting diversity in the years to come as well as an opportunity to hear the inspiring story of Cabello, a child of Chilean immigrants and a first-generation college student.

Herbert noted that UNE, despite being located in one of the whitest states in the nation, was built upon the principle of inclusion. Its precursors – St. Francis College and Westbrook College – he said, were steeped in the tradition of welcoming those who previously had been marginalized and barred from institutions of higher education. Herbert explained that St. Francis was founded in the 1950s to educate the children of French-speaking Canadian immigrants who worked in the local mills, and Westbrook College was founded in 1831 as a co-educational seminary at a time when very few colleges opened their doors to women. “Both of these schools played important roles in changing the ways people in Maine and in American society more broadly thought about a college education and who might pursue one,” he remarked.

He also praised St. Francis College for its inclusive stance in the turbulent 1960s, offering a series of symposia about racial equality and even hosting Dr. Martin Luther King, Jr. on campus.

Herbert looked not just to the past but to the future as well. He assured the event’s attendees that UNE’s Strategic Plan, a first iteration of which was recently made public, will place a strong emphasis on enhancing the diversity of the community along all dimensions of human difference. “We are proud to carry forward the tradition of our forebear institutions, in striving to be as inclusive and diverse as we can be,” he said, noting the importance of “providing people access to higher education who historically have been excluded or underrepresented.”

Herbert’s message resounded with Willie Wood (Medical Biology/Pre-Med, ’21), one of the transfer students who attended along with first-years. “I came to UNE from a community that had a small amount of diverse folks,” he shared. “It is incredibly refreshing to have a place that is putting effort into creating a diverse community that is striving for inclusion.”

Cabello’s talk detailed her personal journey through her college experience, discussing the importance of resiliency among minority students who attend a predominantly white college or university. She acknowledged that such students may have challenges that their white counterparts do not face but also emphasized the strengths that minority students bring with them to college. “I will tell you right now,” she said, “as students of color, you bring a unique set of talents, skills and experiences that make this campus better,” she declared.

Cabello shared the trials of her own first year of college, reflecting that she “felt pressure to conform to the dominant culture.”

“I thought that by dimming my own light that I would fit in more,” she said. However, in hindsight, Cabello said that it wasn’t until she fully embraced her identify as a Latina on campus that she became truly fulfilled by her college experience. “The more I became secure in my identity and experiences, the more things worked out for me,” she recalled.

The event, intended to be the first of an annual tradition at UNE, was spearheaded by Rousseau, whose experience as a student at a similar event during her own college days left a lasting impression. “It made us feel valued,” she explained. “It made us feel like we were part of something, and ever since I came to UNE, I’ve wanted to bring that experience here to our students of color.”

Ebony Dukes (Health, Wellness and Occupational Studies, ’20), supervisor of UNE’s Cultural Exchange Lounge and co-president of the UNE Black Student Union, was one of the student leaders who attended the breakfast. She shared her feelings as a minority student at UNE and why she feels that an event such as the Scholars of Color Breakfast is beneficial. “As a student of color at a predominantly white institution (PWI) it can be challenging to find a place where I feel like my ethnic and racial background is accepted and recognized,” she said. “My first year at UNE, I was the only student of color in all of my first-year classes. This is an experience that can be startling to new students, especially students who are coming from environments where they used to be the majority. So, what’s so great about the Scholars of Color Breakfast is that it allows students of color to not only meet and interact with other students of color but also with staff and faculty who are there to support and encourage them throughout their academic journey at a PWI.”

Dukes’ co-president, Roxanne James (’19), an Environmental Science major/Secondary Education minor, who also attended the breakfast, agreed. “During my time at UNE, I have felt as if some students did not understand my experiences or struggles,” she stated. “Attending the Scholars of Color breakfast allowed me to hear from other students whose experiences were quite like my own.”

Rousseau was pleased that her goal of hosting a welcoming event at UNE for new students of color was realized, and she was appreciative of the support from all the entities within UNE that made the event not only possible – but a great success. “A lot of people came together to make this happen,” she said. “And it is so rewarding to see it come to fruition and be impactful on the lives of UNE’s students of color.” 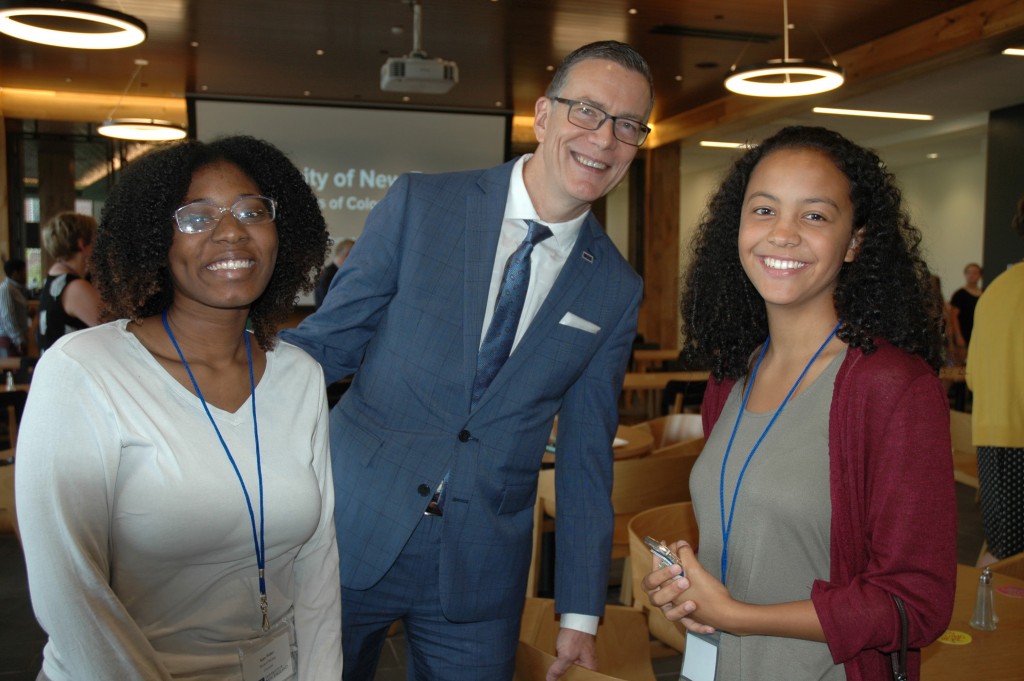 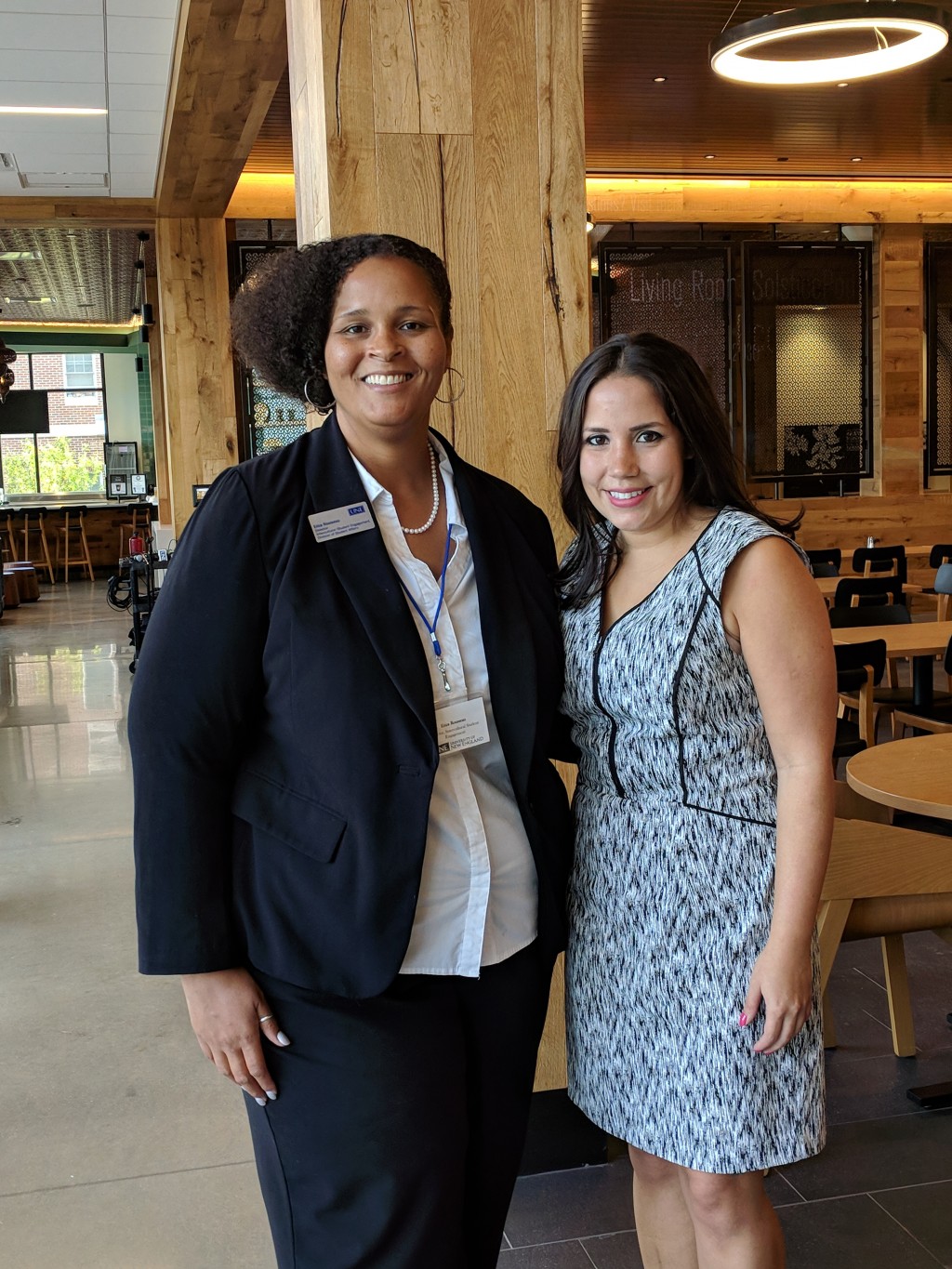 Erica Rousseau, director of Intercultural Student Engagement and organizer of the event (left), poses with Constanza Cabello, assistant to the president for institutional diversity and director of intercultural affairs at Stonehill College, who spoke to the group about the importance of resiliency for minority students.
Return to all news