Sunrise was still a few hours away as Noah Perlut, Ph.D., associate professor and chair in the Department of Environmental Studies, gathered with students from his Terrestrial Wildlife Lab on UNE’s Biddeford Campus.

From there, they made a three-hour trek north to Downeast, Maine, where they would soon have the encounter of a lifetime.

Led by wildlife biologists from the Maine Department of Inland Fisheries and Wildlife (IFW), the students ventured into the forest, made their way down some logging paths, and were finally shuttled deeper into the woods on snowmobiles.

The biologists took them to a small opening in the ground where they began digging up dirt and materials from trees. Inside was the home of a mother bear and her cub.

“The den was very impressive,” stated Olivia Scott (Biology/Environmental Science, ’20). “It was a large hollowed-out cavity in the ground.”

It was one of more than 75 dens the state’s wildlife biologists visit each year. During this visit, the students got an up-close look at the bears and were even able to hold a six-week old cub. They were kept a safe distance away as biologists sedated the mother bear. The cub was small, with its teeth just beginning to grow in. It did not pose a threat to the students.

“We all agreed that the cub smelled like the earth, like mud from a river,” commented Scott. “He had quite a personality too, attempting to climb onto the shoulders of some students, sometimes trying to nibble their ears or find warmth in their hair.”

The biologists began to gather information that will help them assess the health and distribution of the state’s black bear population. The data also helps state regulators set hunting rules across different regions.

“We learned a lot about black bear ecology, including their feeding behavior, reproductive processes, and their denning behavior throughout the harsh winter,” explained Maskiell. “To be able to get out in the field and learn so much from the biologists was something unique to the Environmental Studies program at UNE. Our professors provide us with many great opportunities like this one that stretch beyond the classroom.”

For 40-years, biologists with IFW have monitored the health of Maine’s bear population, making it the longest running study of its kind in the country.

“Experiences such as this help us envision the kinds of jobs that we can pursue,” said Scott. “The more that I learn and experience, the more that I can see myself doing wildlife conservation in the future.”

For all of the students, it was an incredible hands-on learning experience and one they will not soon forget.

“This experience was truly transformational for our students, as they learned about hibernation, bear ecology, habitat selection, and what some professional state biologists do,” commented Perlut. “All while cuddling with a 6-week old cub.” 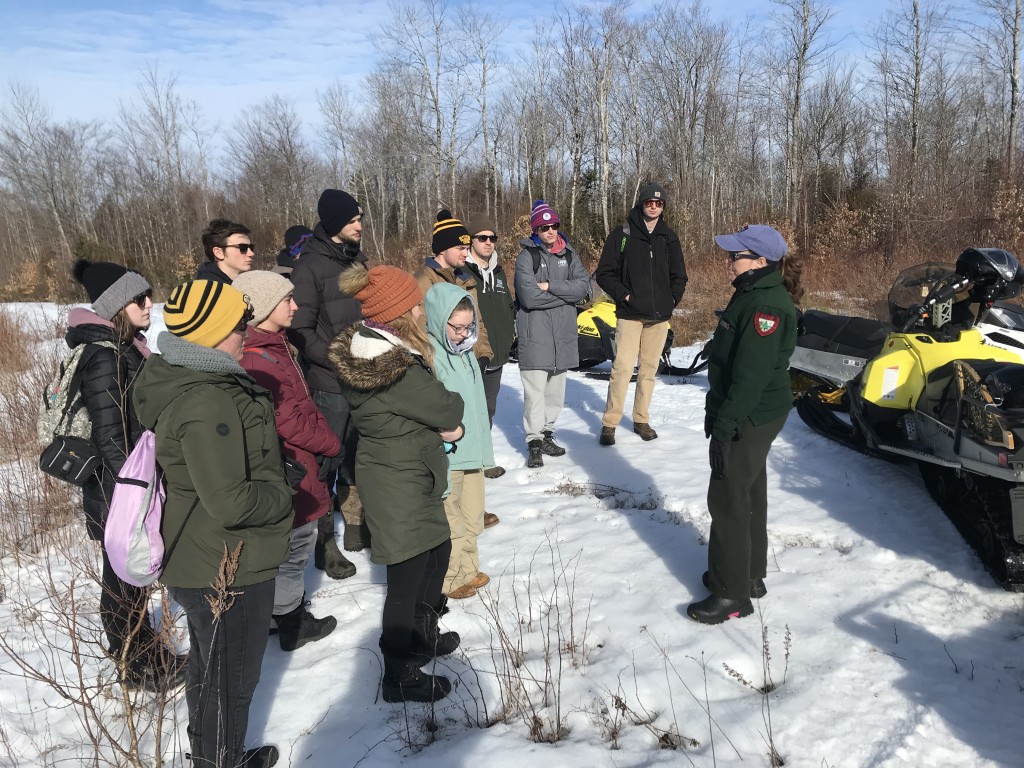 Students learned about IF and W's 40-year bear study, the oldest of its kind in the country
Image 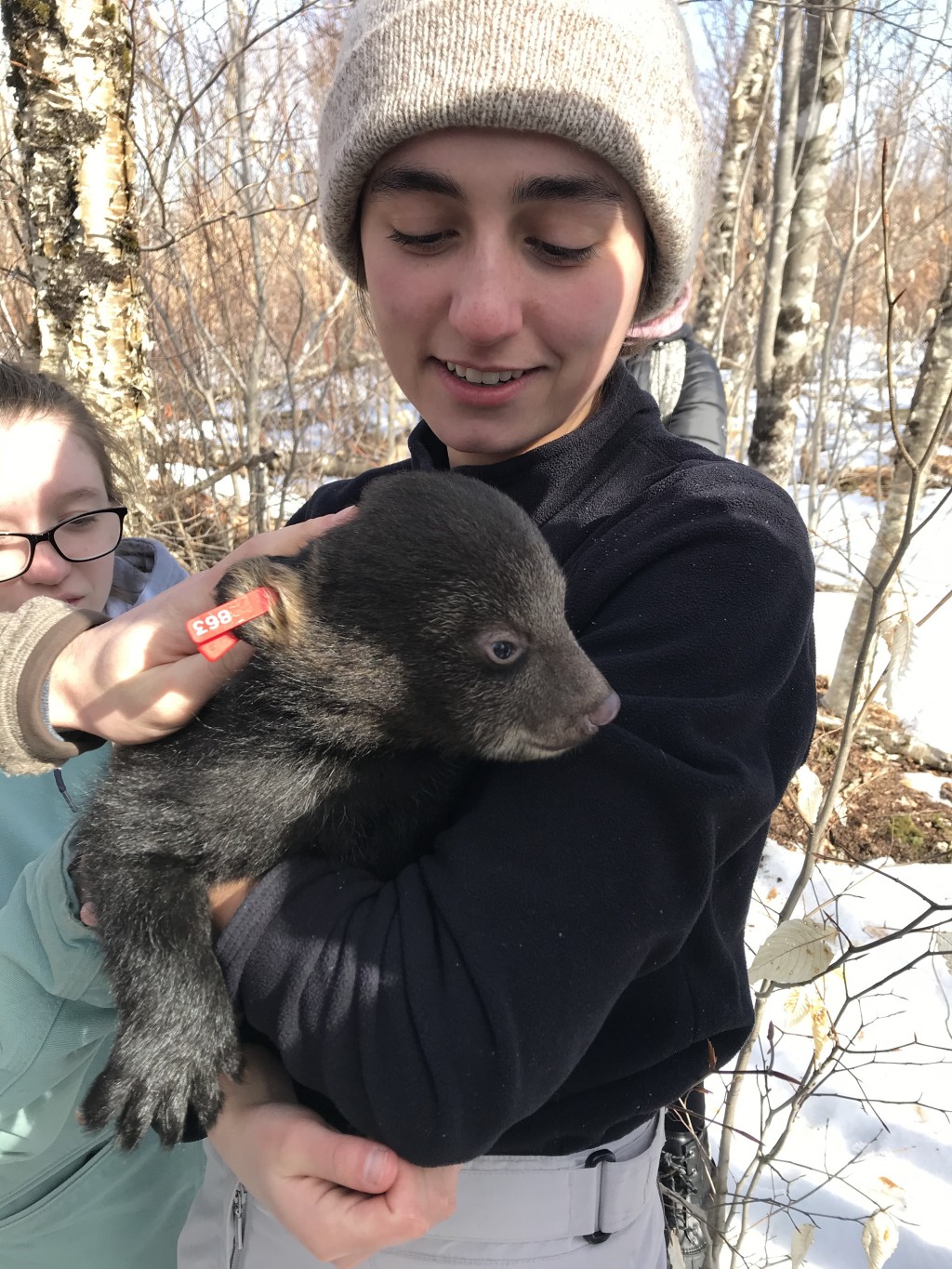 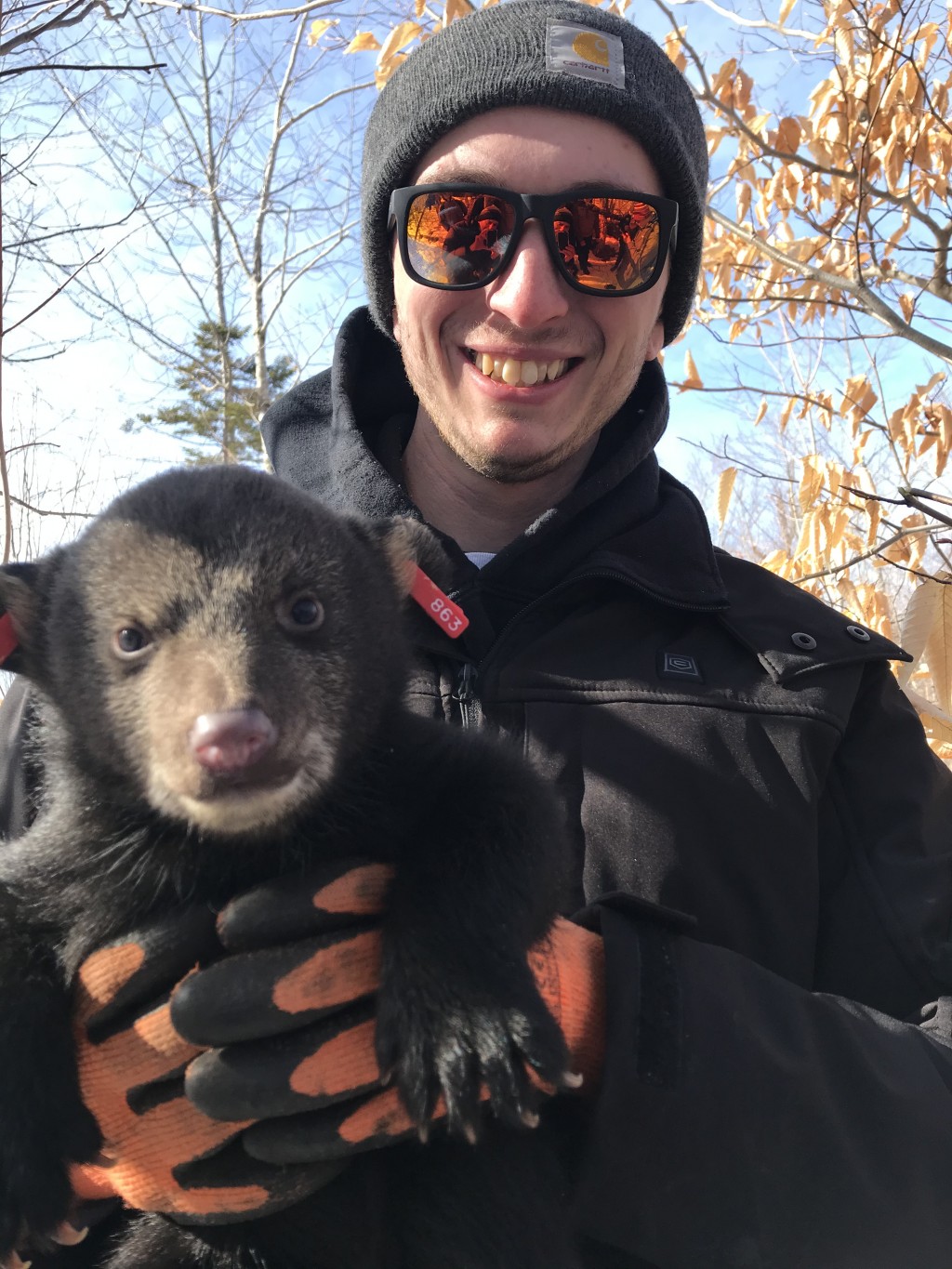