First students return to campus after the COVID-19 shutdown

Typically, the Harold Alfond Forum is bustling with students and athletes. But, as the first Master of Science in Athletic Training students returned to classes there, they found the building dark and empty.

“It was really weird not seeing very many people around,” stated Elizabeth Fuller (M.S.A.T. ’22)

Taylor Hopkins (M.S.A.T. ’22) added, “Especially having the lights out in the ice rink. Usually that's the first thing you see when you walk in. As a student athlete, I definitely spend a lot of time in this building, so it is unusual having it so empty.”

On the second floor, the lights were turned on in the classroom where Fuller, Hopkins, and Mariah Aubin (M.S.A.T. ’22) began a new phase of their education.

“We now wear a gown, and, at first we had to wear two masks and gloves, so there were extra precautions to make sure nobody got sick,” Aubin said.

The students say they all kept up with their work online throughout the shutdown and are still on track to graduate on time.

“You have to hold yourself more accountable at home and that was really hard for me,” Fuller explained. “The professors were flexible by recording the lectures so we could have them available during different times.”

“All of the students who came to Maine had to quarantine for two weeks,” she said. “We started with all of our courses online, just like they were in the spring. Then in the middle of June, we began to bring small cohorts of students back to campus with the focus on laboratory learning and simulation, two areas that we really can't replicate particularly well in a remote learning or online format.”

Typically, students work with different groups of classmates to get new perspectives. Students who returned to campus this summer were placed in defined groups to limit exposure to fewer people. Gradually, more and more students were brought back to campus.

“So far it has really gone incredibly well,” Pardue stated. “I feel like we'll be ready to welcome students back in the fall.”

Pardue acknowledges new safety protocols, including wearing a gown, mask and gloves, may make things more difficult for students, but it is something most health care workers will have to get used to.

“To wear all that on a 12-hour shift is exhausting and physically taxing,” she commented. “I think it gets mentally fatiguing too, but that is the reality of clinical work right now.”

“I know it is something we are going to have to get used to because we will all soon be going out into clinical rotations,”  she said.

Mulvinhill was in the PT lab in the basement of Alexander Hall with much smaller groups of classmates than what was allowed before the COVID-19 outbreak.  An average classroom would have 60 students with three or four professors; now it is down to 15 students with two or three professors.

“It feels really refreshing, I am not going to lie,” he stated. “When you put it into perspective, we are actually getting our education on time right now, whereas there are other students who are having to wait and are getting pushed back.”

Maryam Nahidian (D.P.T., ’22) says the transition to online back in March went smoothly, but she is much more comfortable learning in the lab.

“Learning wise, I learn the best in the lab,” she explained. “When that got taken away, it definitely was a bit more of a struggle for me.”

In June, College of Dental Medicine students returned to the Oral Health Center for the first time in nearly three months. Instead of groups of 64, dental students now work in groups of 21, spread out through the day.

“They really bring an energy here,” said Fields Farrior, D.M.D., M.S., associate dean of Clinical Education and Patient Care.   “They appear to be very happy to be back. I am sure there is some anxiousness or anxiety around coming back in, but they are doing their part by coming in as scheduled and working in their small groups.”

While the students know that model is safer, they cannot help but acknowledge what is lost when they can’t all work and learn collaboratively in person.

“We do not have the same type of community we had beforehand and that is one of the really special things about UNE,” commented Luke Shaner (CDM, ’23). “When we first started there was a sense of community and we all worked together. They have done a really good job of maintaining that to the degree that they can, but it is still a change that we are dealing with.”

As William Sorokolit (CDM, ’23) returned to the OHC, he wondered how out of practice he would be with his hands-on skills.

“I worried about the hand skills, but I think they're going to be back pretty quickly,” he said. “It was hard staying home because you are used to coming in here two to three times a week and coming in after hours to practice. The faculty did their best given the circumstances. The transition to online was actually better than I expected, but hands-on is the most important thing you can do, especially for dentistry.”

No matter their program, students who resumed on-campus learning this summer agree that hands-on learning is vital to their education.

“It is very important and something that helps me understand exactly what is going on,” said Maryam Nahidian. “For me it is hearing it, seeing it, doing it, and then all of a sudden everything clicks for me. 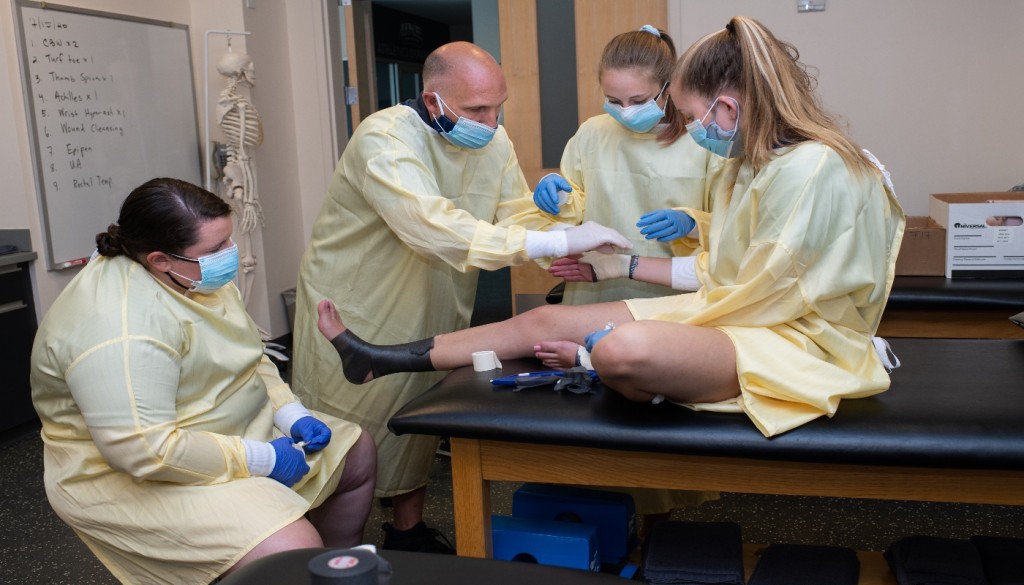 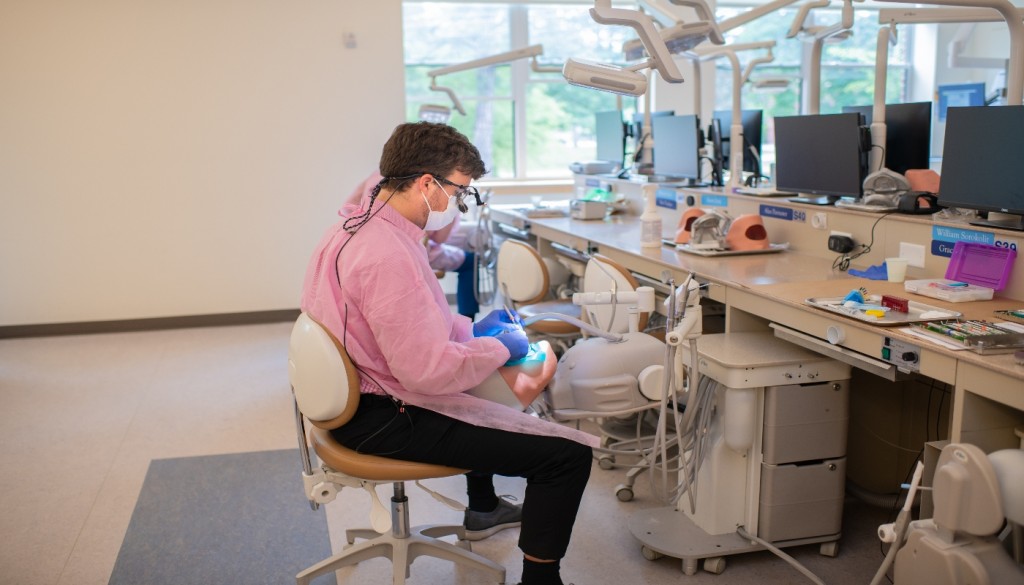 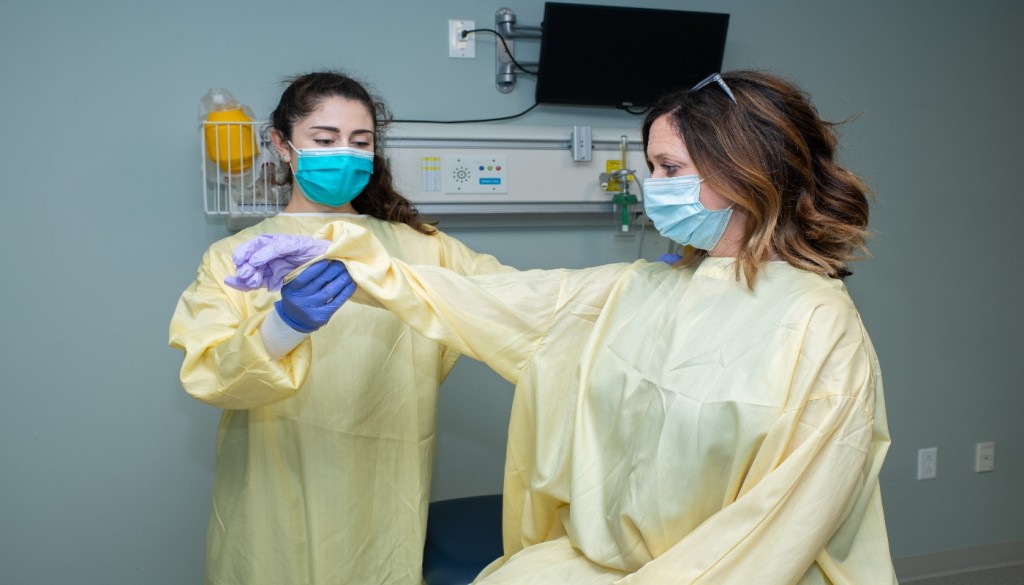 Students in the PT lab
Image 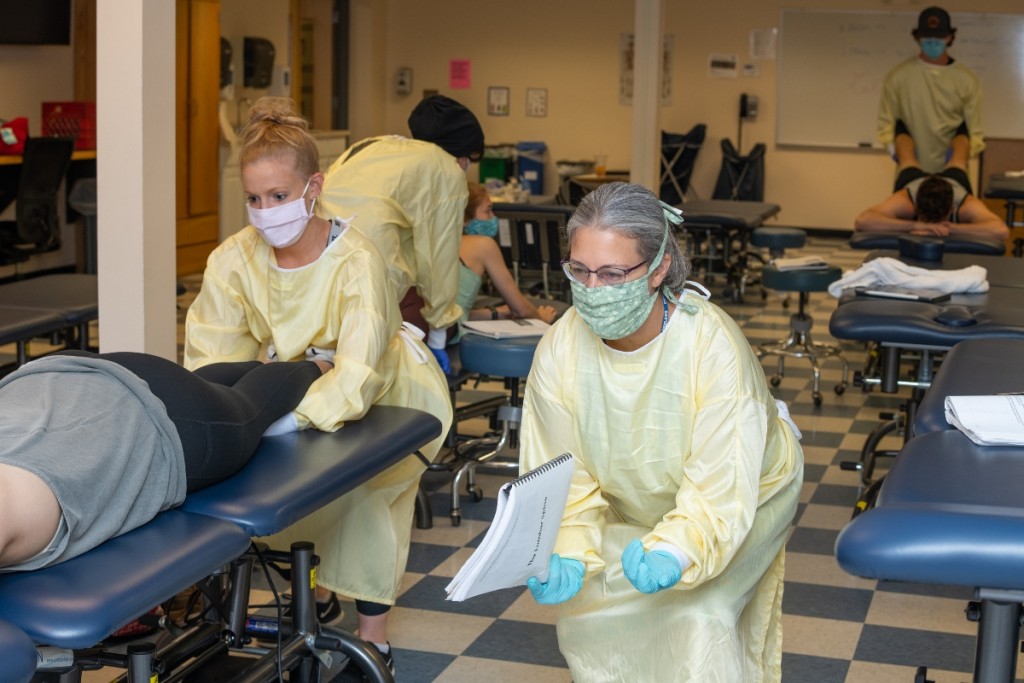 Kaylene Mulvinhill follows her instructor's lead
Return to all news