Artist and advocate Patrisha McLean told her story about escaping an abusive relationship at an event held at the University of New England on Feb. 10, in association with her exhibit "Finding Our Voices," on display in Biddeford through February.

Artist Patrisha McLean never asked to be in the public eye, but when her husband — Don McLean of “American Pie” stardom — was arrested on domestic abuse charges in 2016, her story was exposed for the world to see.

McLean turned her pain into art with “Finding Our Voices,” a multimedia exhibit that pairs photos of 21 domestic violence victims with audio of their voices recounting their stories, now on display through the end of February at the University of New England’s Biddeford Campus Center.

On Monday, Feb. 10, nearly one year after the exhibit first opened, McLean spoke to a crowd at the Campus Center about her story of entrapment and freedom, presenting a slideshow outlining her experience. She also projected visuals depicting the warning signs of domestic abuse.

The goal of the presentation, McLean said, was to educate students about domestic abuse — what abuse looks like, how it is executed, and what it means to be a victim — in hopes of stopping it for good.

“[Domestic violence] is not our shame,” she said to the crowd. “It happens to strong, smart women. The time for it to stop is now.”

She cautioned women in the audience to learn the warning signs of abuse — including grudges, lies, and putdowns — and to compare their experiences to the “Power and Control Wheel,” a guide to methods of abuse developed by the Domestic Abuse Intervention Programs in Duluth, Minnesota.

Those methods were demonstrated when McLean played out loud jarring voicemails from her former husband, illustrating that abuse comes in many forms including threats and coercion, isolation, intimidation, and emotional and economic abuse, among others.

McLean also sought to remind women and other victims of abuse that they are not alone in their experiences. Recounting the ways that she dealt with her abuse, McLean said it was particularly helpful for her to talk out loud about it.

The presentation and subsequent discussion were organized by the UNE Center for Excellence in Collaborative Education (CECE), a University-wide hub for cross-disciplinary education and collaborative practices across academic disciplines, and co-sponsored by the UNE Office of Intercultural Student Engagement.

UNE student Kimberly Davis (M.S.W., ’21) assisted CECE in bringing “Finding Our Voices” to campus and introduced McLean at the event. She said the presentation and exhibit helped illustrate to the audience the reasons women don’t “just leave” abusive relationships.

“I doubt anyone left the room without a deeper understanding of the ways in which an abuser wields psychological terror to purposely unhinge a victim from reality,” Davis said. “The fact that over 1,000 people have viewed the event online is a perfect indication of the pervasiveness of the problem and also, perhaps, the interest others have in learning how to lean in, to listen, and to help.”

McLean said she is grateful to the UNE community for allowing her to tell her story and hosting her exhibit. She also praised the University for helping educate its students about this difficult subject matter.

“UNE was the first university venue for my exhibit, and as I continue to bring it to colleges I doubt I will ever have a more gratifying experience,” she said after the event. “UNE is a top-notch institution and I am proud to be associated with it.” 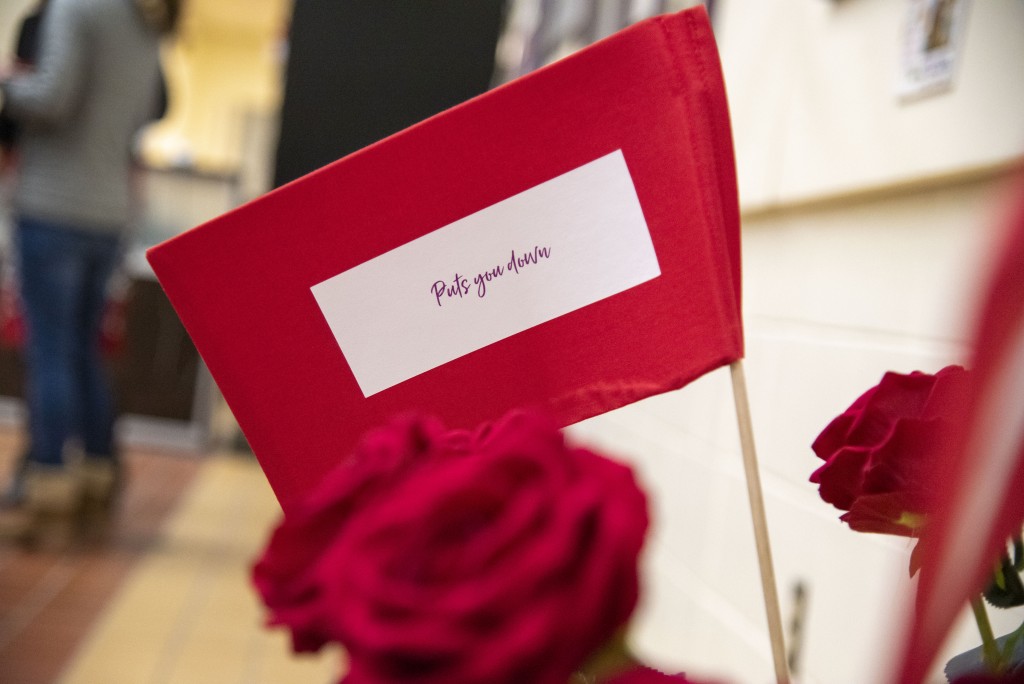 McLean's exhibit also educates viewers on the signs of domestic abuse, depicted here as "red flags" among a bouquet of roses.
Image 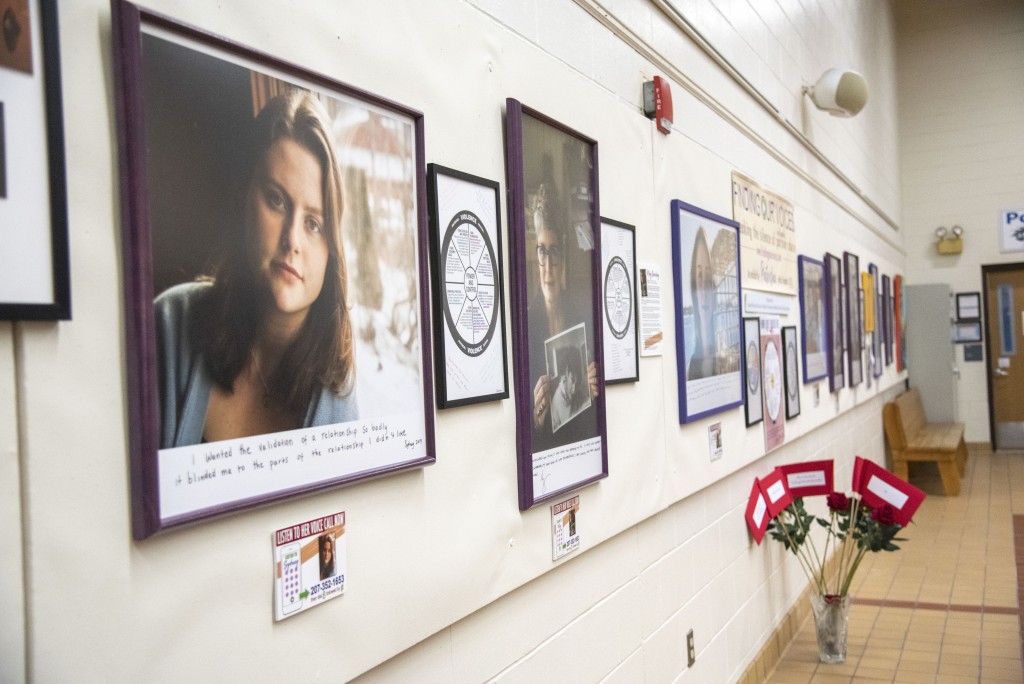 The multimedia exhibit, "Finding Our Voices," pairs photos of 21 domestic violence victims with audio of their voices recounting their stories.
Image 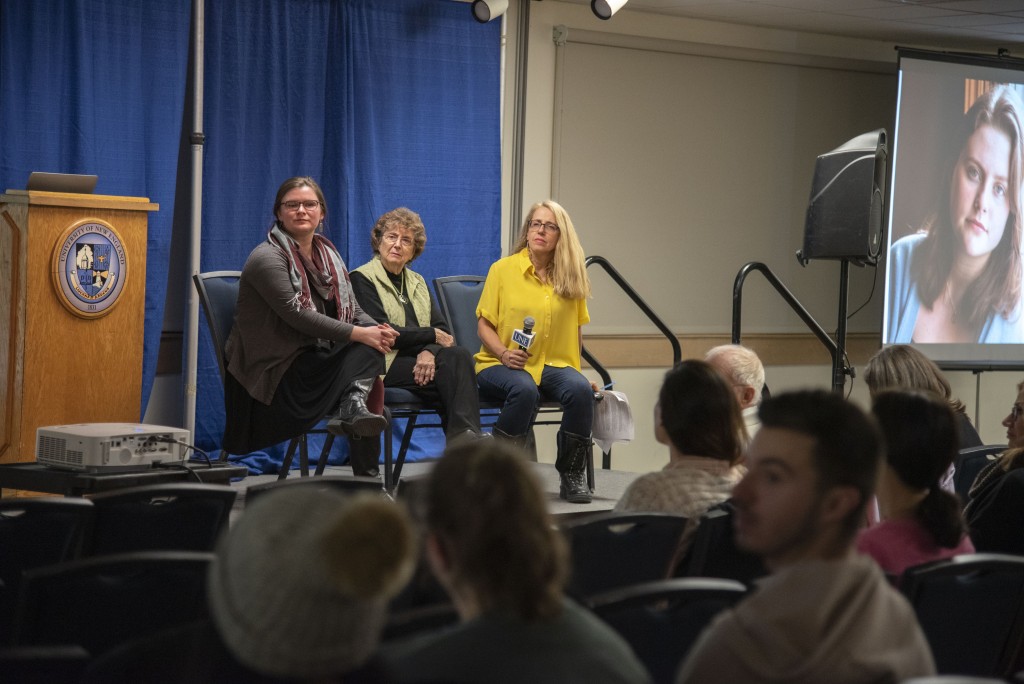 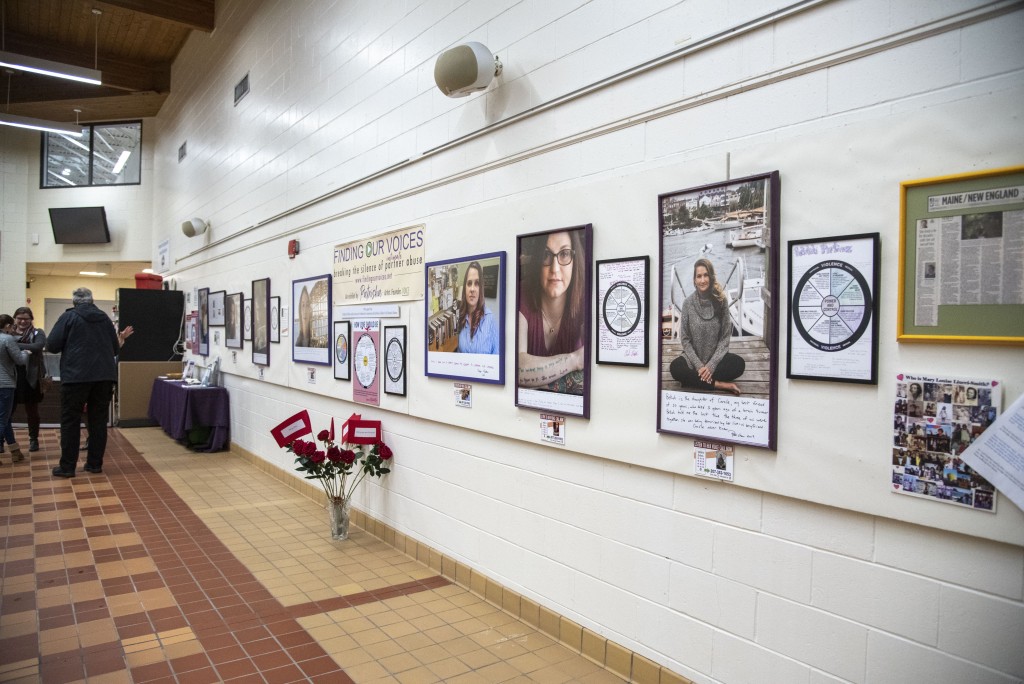