Andy Robinson (M.S. Marine Sciences, ’21), front, places oranges in the water in Biddeford Pool to track surface current movements with Charles Tilburg, Ph.D., director of the School of Marine Programs and professor of Marine Sciences (back).

A University of New England student is researching the flow of water in and out of Biddeford Pool, steps from the University’s coastal campus, in an effort to better understand the movement of pollutants that have plagued the tidal bay’s shellfish industry.

Andy Robinson (M.S. Marine Sciences, ’21), is studying the currents and water flow around Biddeford Pool, which has in recent years been periodically closed to area fishermen due to contamination. In September, for example, surges in bacteria forced the Department of Marine Resources to close the Pool to clam digging for an unprecedented three months.

By examining the sources of water in and out of the water body, which drains nearly completely in low tide, Robinson hopes to identify potential sources of pollution.

“With the closures to shell fishing Biddeford Pool has seen in recent years, understanding the origin and fate of that water has become very important,” Robinson said. “Let’s say the water is coming from offshore; maybe there is a pollutant being drawn in. Hopefully my project can be the first step in identifying that water quality issue.”

Working with Charles Tilburg, Ph.D., director of the School of Marine Programs and professor of Marine Sciences, Robinson has taken a multi-angled approach to examine the water movements in and around Biddeford Pool.

First, Robinson has deployed a set of GPS drifters created in collaboration with Michael Esty, B.S., technical and project specialist in the P.D. Merrill Makerspace, into the Pool. The drifters, fashioned from five-gallon buckets, are equipped with a pioneering radio communication system that relays their exact location to Robinson’s computer.

The drifters are set afloat from one of the University’s research vessels and tracked using Google Earth, Robinson said, to map the tidal patterns. Robinson also takes measurements of the water’s temperature and salinity to identify different water masses that could flow into the Pool.

Additionally, Robinson is using drone technology to survey Wood Island Harbor, where Biddeford Pool drains, to observe changes in the orientation of the boats moored there, another indication of fluctuations in the direction of surface currents.

“The boats will align with the direction of the current,” he said. “Using the drone gives us a much wider area of coverage rather than just sending out a few drifters.”

Initial results have indicated that wind has a great impact on where the water flow is directed, Robinson said. Additionally, water drawn into the Pool appears to funnel through the many dredged navigational channels that run through the lower portion of Saco Bay.

“The hope is that the water in the Pool makes it all the way offshore and gets swept away by the major boundary current in the Gulf of Maine and is then replaced by water from offshore that doesn’t contain the same contaminants.”
Robinson is entering his final year as a student in the Marine Sciences 4+1 B.S./M.S. Track, though he started the work his first year at UNE, when Tilburg encouraged him to pursue research early on in his educational career.

“We’ve built this project together since 2017 into what will become my master’s thesis,” Robinson said. “Dr. Tilburg has helped me develop my skills as an independent researcher not just by giving me guidance as needed but also by letting me learn through failure. Perhaps the biggest way he has helped is by making sure my research extends beyond UNE and into my career as an oceanographic researcher.”

With Tilburg’s support, Robinson is currently drafting a manuscript to be published in a peer-reviewed journal on their development of the revolutionary radio communication system. As data collection continues, the duo plan to present their findings at regional conferences.

“Andy’s work is very important both for the local fishermen and residents but also for scientists to gain a better understanding of tidal movements within closed bays such as Biddeford Pool,” Tilburg said. “Andy is the ideal student and scientist for this project since he blends technical know-how with insightful scientific expertise and an adventurous spirit.”

Having grown up in northern New Jersey, but with a family hailing from New England, Robinson said attending UNE has allowed him to reconnect with the region he considers his second home. He said UNE’s capacity for research, plus its world-class facilities — centered right at the heart of undergraduate student life — have assured him he is on the right career path.

“UNE’s strong undergraduate research program have really reinforced my belief that I want a career in research in the marine field,” he said. “The research opportunities and experiences I’ve had at UNE have helped set me up to pursue a career in physical oceanography.”

Tilburg expressed his eagerness to see where Robinson’s career will take him.

“Andy has taken advantage of every opportunity here at UNE and has blossomed as a scientist,” said Tilburg. “He is doing top-notch science now, but I am even more excited to see what he will do next in his career." 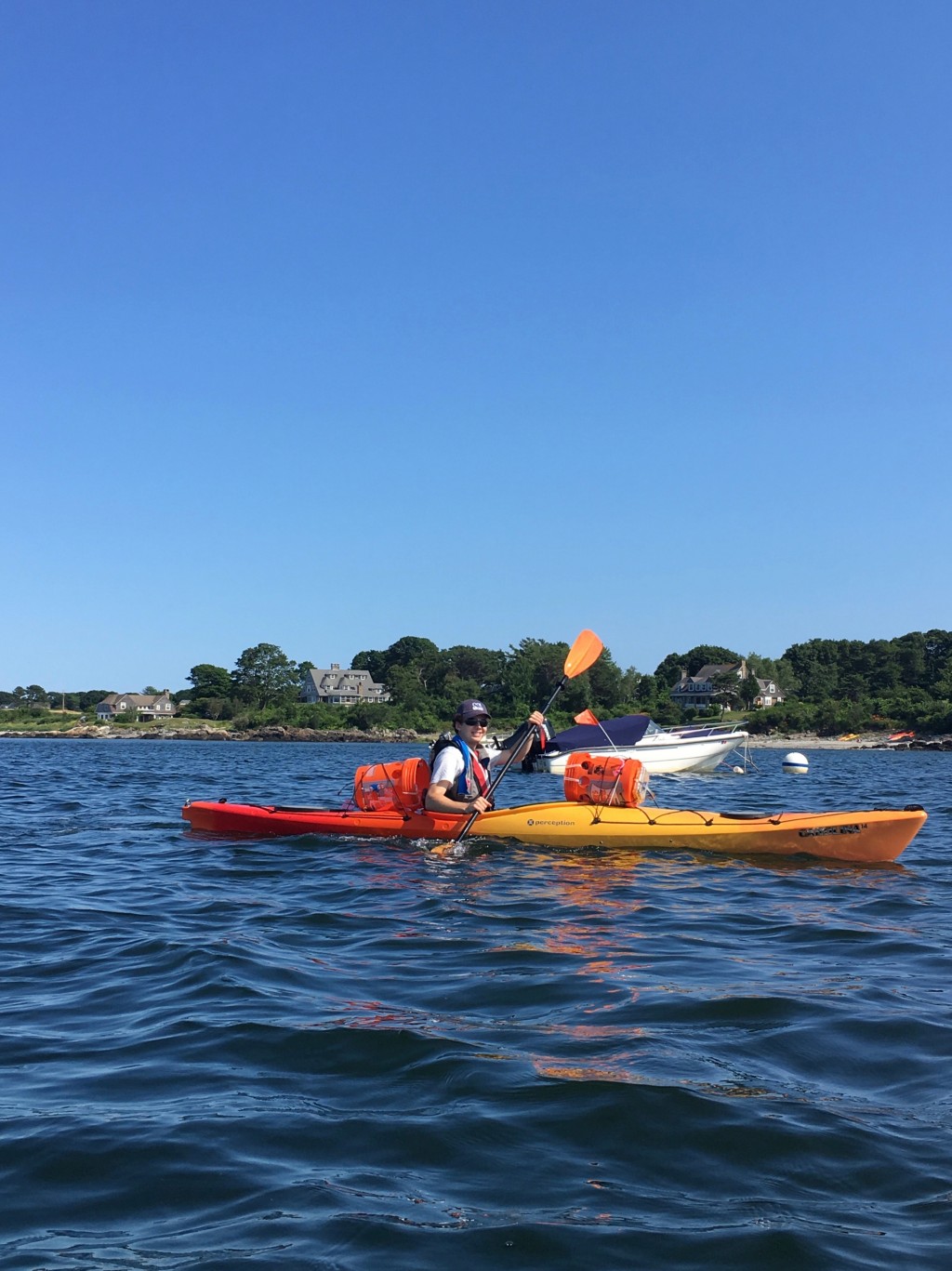 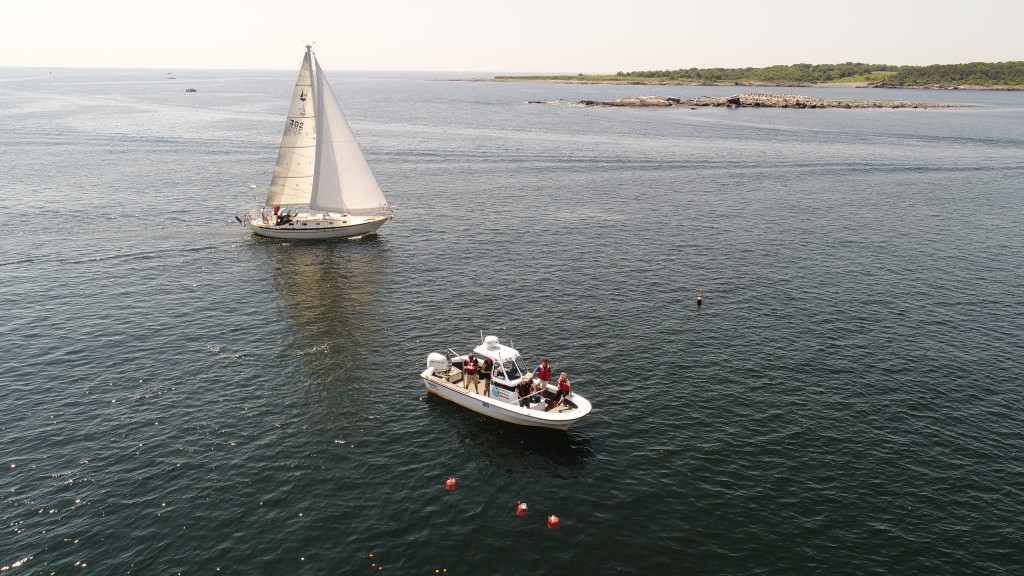 An aerial image of the R/V Llyr above Wood Island Harbor in Biddeford. Robinson is using images like these to track orientation of the boats moored in the harbor, which will become aligned with surface currents.
Image 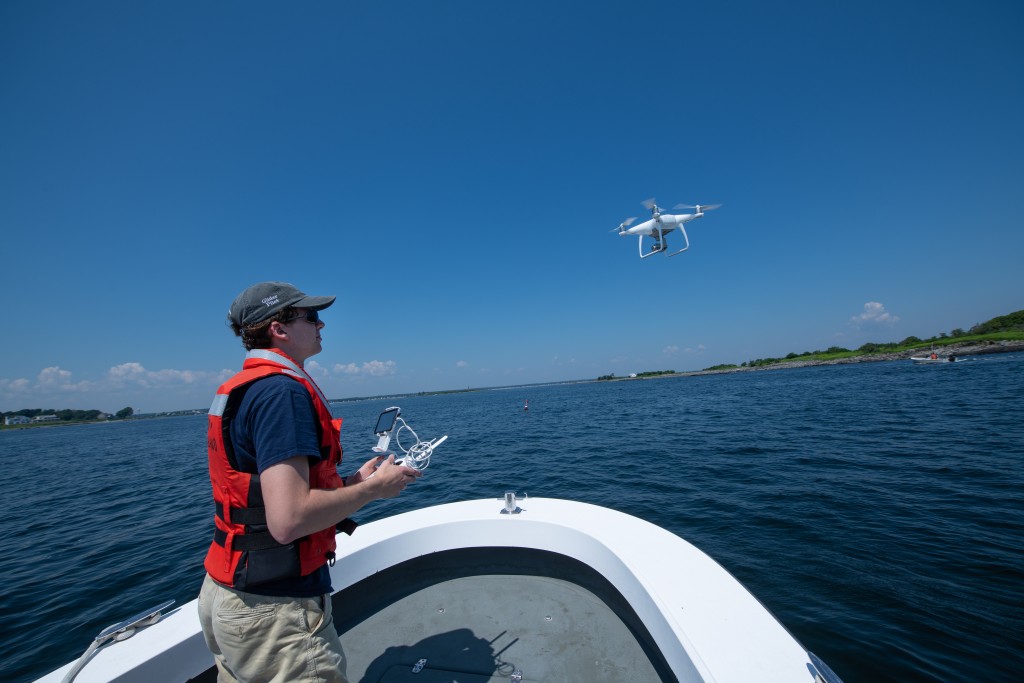 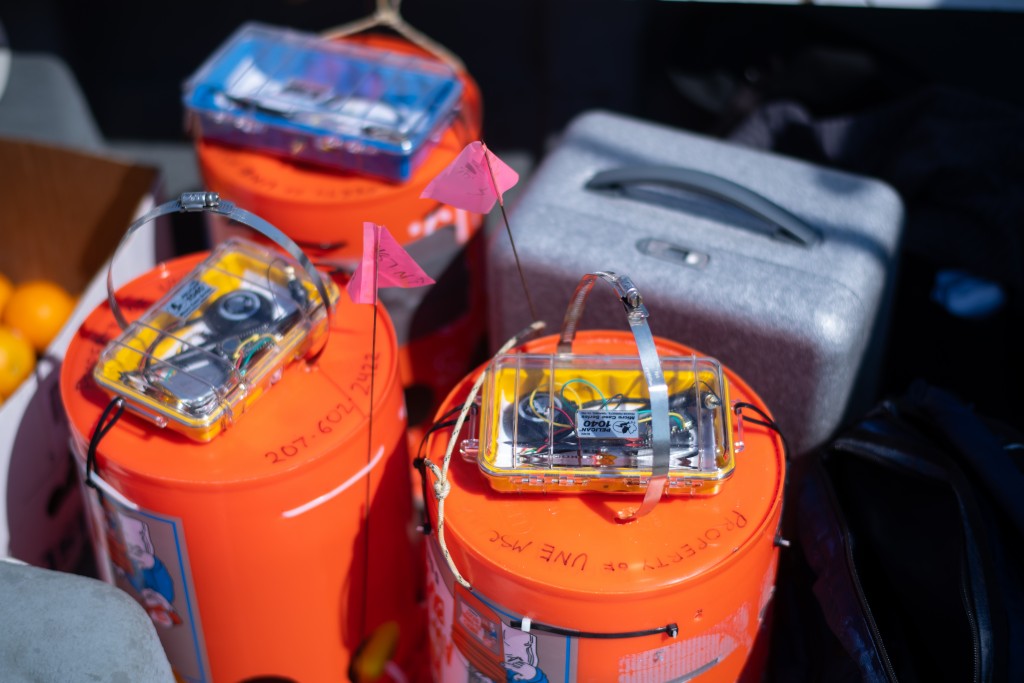 GPS drifters fashioned from five-gallon buckets used by Robinson to track water movements in Biddeford Pool. The drifters use a novel radio communication technology to send their location straight to Robinson's computer.
Return to all news