Both papers are products of a National Science Foundation-funded interdisciplinary collaboration between Balog’s all-undergraduate protein biochemistry and biomaterials research group at UNE and a biosensing research group under the direction of UNH’s Jeffrey Halpern, Ph.D., assistant professor of chemical engineering.

The first paper, titled “Electrochemical characterization of the stimuli-response of surface-immobilized elastin-like polymers," was published in the journal Soft Matter — an interdisciplinary journal focused on the interface between chemistry, physics, materials science, biology, and chemical engineering — and examines a study on the potential for polymers similar to elastin, a naturally occurring protein in body tissues, for use in biomedical sensing technologies.

These elastin-like polymers (ELPs) may have applications in future biosensing technologies, examples of which include home pregnancy tests and glucose monitors, Balog said. However, there are biosensing technologies that have yet to be developed — or that are too expensive or cumbersome for general use — and ELPs could play a role in creating practical versions of those sensors.

“There is a need for improved and diversified sensors for biomolecules, generally for disease and biomarkers for disease,” Balog said. “We did not make a sensor, but we are working toward a new type of technology that can lead to fast, easy, selective and reproducible sensors.”

For the study, Balog and her team of researchers looked at an ELP called I40, whose key component is isoleucine, developed from bacteria in Balog’s lab. The researchers attached strands of I40 to a gold surface, submerged in a solution, and observed changes in the polymer in response to a stimulus — in this case, sodium chloride (salt).

The goal was to examine whether the strands of I40 would expand or collapse in response to the salt, and thereby measure the impedance, or opposition to the flow of electrical current, throughout the ELP via electrochemical impedance spectroscopy (EIS).

The study confirms the use of ELPs is beneficial to developing electrochemical sensors, Balog said, and provides a reproducible framework for future research.

“We are the first to monitor this ELP behavior on an electrochemical surface,” Balog said. “That really validates a lot of people’s existing expectations that these polymers have potential in biosensing applications. Many previous promises about ELPs haven’t been realized because there is technical groundwork that needs to be laid, and this is part of that technical groundwork.”

The journal article was also featured on the back cover of Soft Matter, which is published by the Royal Society of Chemistry.

Balog’s second paper, “Application of Voltage in Dynamic Light Scattering Particle Size Analysis,” published in the Journal of Visual Experiments (JoVE), develops methodology that complements the research conducted in the aforementioned paper, which, Balog said, had to be developed to examine stimuli-responsive ELPs in a solution.

However, Balog said, prior to her and her team’s research, there was no way to utilize DLS for particle sizing in a solution in the presence of applied voltage, which the team needed to do.

“That was desirable to us because the surface of an electrochemical sensor is asking molecules to behave in the presence of an electrical field. We didn’t even have a way of testing that independently,” she said. “We found a solution, and we wanted to share our solution because it worked.”

This news has been picked up by WorldNews Science. 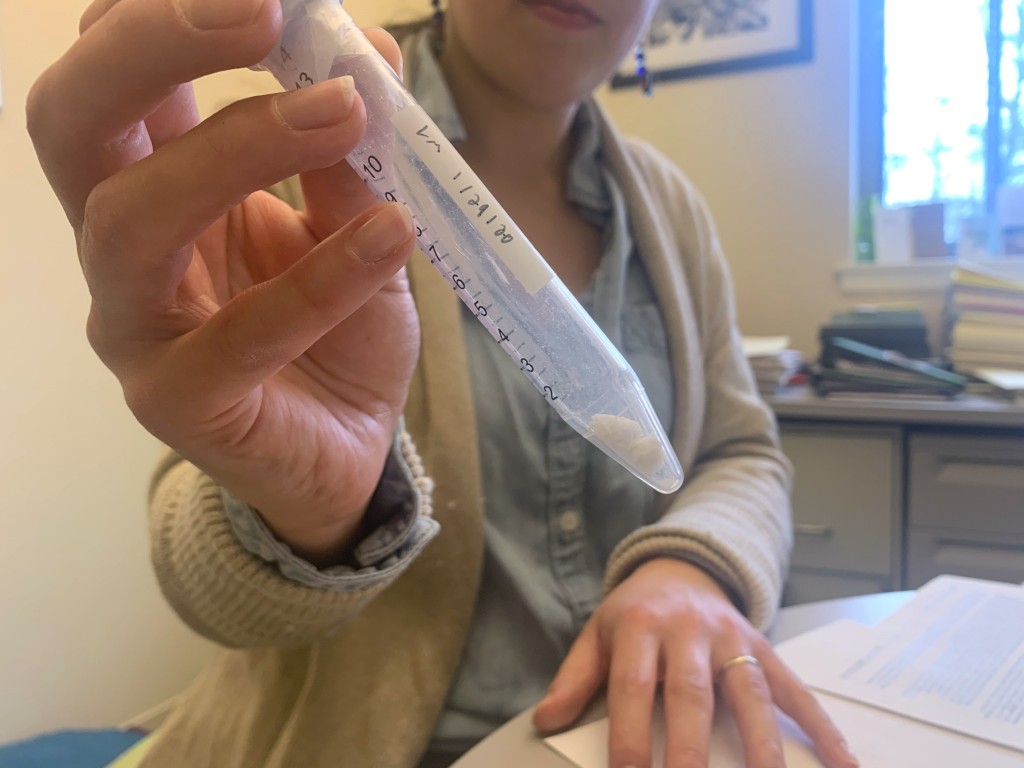 Assistant Professor of Chemistry Eva Rose Balog holds a sample of the elastin-like polymer I40, which was developed in her lab from bacteria.