The lives and contributions of both America’s and the University’s veterans were celebrated at the University of New England on Veterans Day, Nov. 11, in a gathering at the Danielle N. Ripich Commons on the Biddeford Campus.

The event — organized by the UNE College of Osteopathic Medicine (UNE COM) Association for Military Osteopathic Physicians and Surgeons (AMOPS) and the Undergraduate Student Government (USG) — brought together UNE students, student veterans, participants of the Army ROTC, and several community members for an hour of impassioned storytelling and gratitude for those who have served in the Armed Forces.

UNE President James D. Herbert, Ph.D., speaking before the crowd, thanked students and faculty with military experience, saying that they represent the “very best” of UNE.

“You deserve our deep admiration and thanks — not just today, not just in November, but every day of the year,” the president remarked. “Students, it is only through your resolve, determination, and sacrifice that the American way of life has been preserved. You inspire me; your maturity, your patriotism, and your deep understanding of issues many young people are just now confronting brings out the best in your peers. We are forever in your debt.”

Jonathan Laurie (Health, Wellness, and Occupational Studies, ’22), current chair of Student Affairs for the USG and former Gunner’s Mate 2nd Class for the U.S. Navy, said the ceremony was a warming experience that demonstrated the camaraderie of what it means to be a veteran.

“It’s so powerful to be in this environment, surrounded by other veterans,” Laurie said. “I love seeing other students who are veterans because you don’t know, in your day-to-day life wearing civilian clothes, who shares the same type of background as you. It’s comforting to be here and hear stories from those presenting to the crowd.”

Fullmer reminded the audience not to take their freedoms for granted because, she said, they have come at a cost.

“No one hates war more than those who’ve served in the military, but the one thing we hate more is the safety of our children and communities being threatened,” Fullmer said. “In many areas of the world, there are no choices like we have in America. So, when you thank a veteran today, think about why you are saying ‘thank you,’ because veterans understand the value of freedom.”

U.S. Navy Ensign Katie Santanello (D.O., ’24) said her planned experience as a naval doctor will help her better serve her community as an osteopathic physician.

“I’m eager to work on interprofessional teams in the military. Every single person has insight that is a nod to both their past experiences and current ideals, and we must understand and value their perspectives and ensure that everyone has a seat at the table,” Santanello said. “I believe these interprofessional experiences inherent to military service will serve me well in my time as a civilian after my career in the military.”

Laurie said his experience in the U.S. Navy taught him to push boundaries — a skill he sees as necessary for when he graduates this May.

“You’re forced to push boundaries as part of your job in the service, and the same can be said in a professional setting, especially in health care,” Laurie stated. “I think it's really important for anybody to acknowledge what they're truly capable of and how far they can push their own boundaries because something really remarkable happens when you do trust and have faith in yourself. Something that might've been an overwhelming challenge becomes a beautiful opportunity for growth and change.”

Ashley Roy (Medical Biology, ’22), USG vice president, said it was an honor to organize this year’s Veterans Day commemoration, and she thanked Fullmer and Rappold for attending.

“It is my hope that students take more than just the two hours today to recognize our nation's bravest men and women,” she said. “Col. Fullmer and Capt. Rappold are inspirational to me for their leadership, service, and selflessness. I was thankful to have the opportunity to hear them speak with us today.” 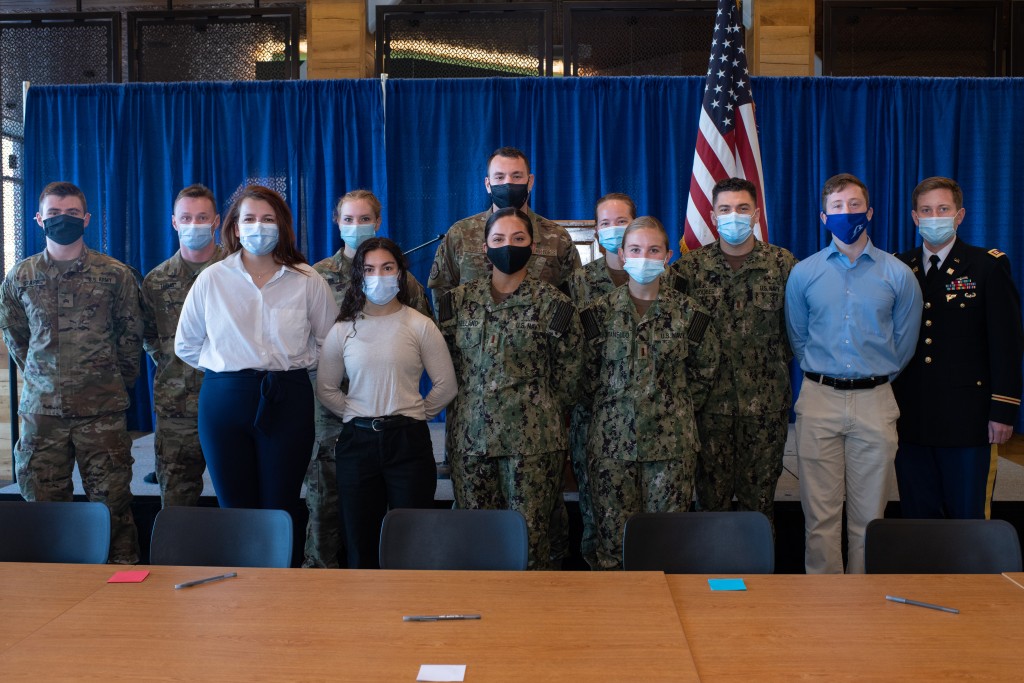 Organizers of the ceremony pose for a photo.
Image 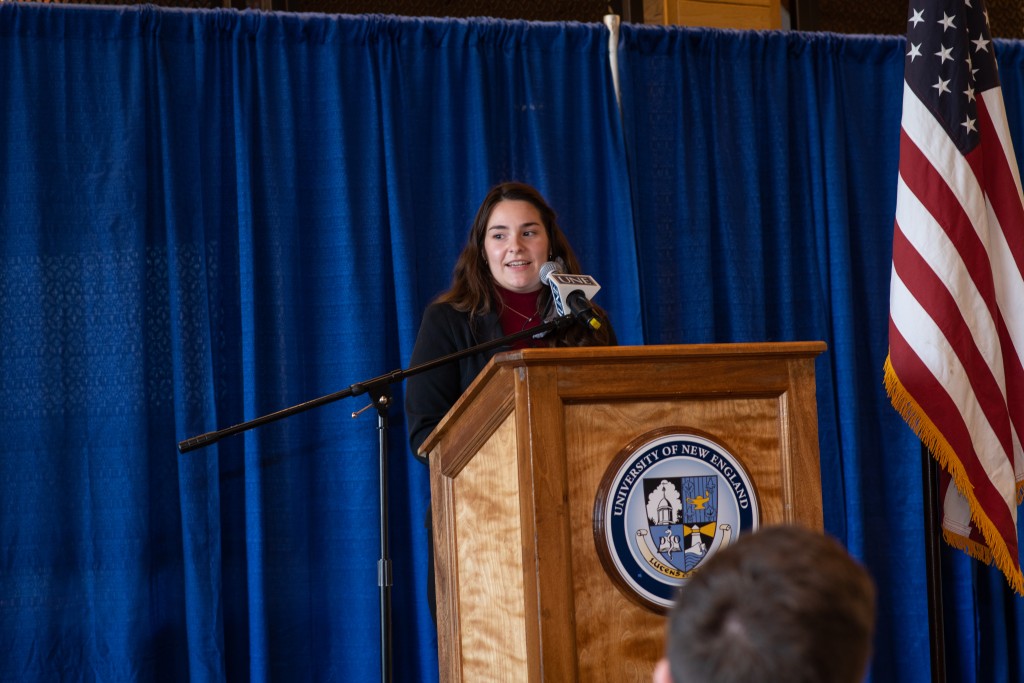 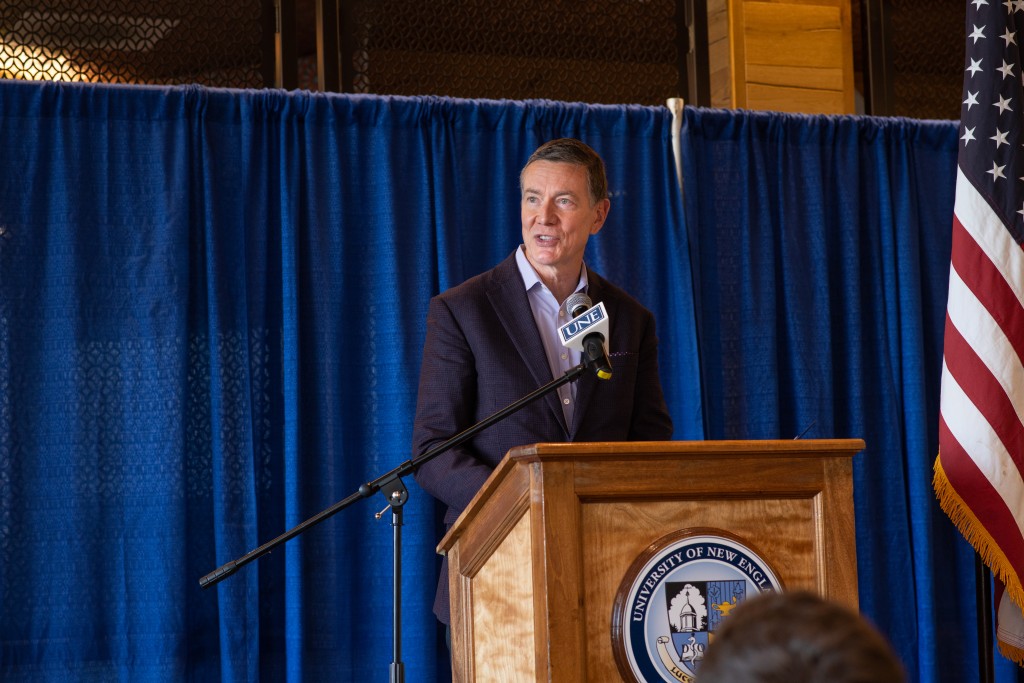 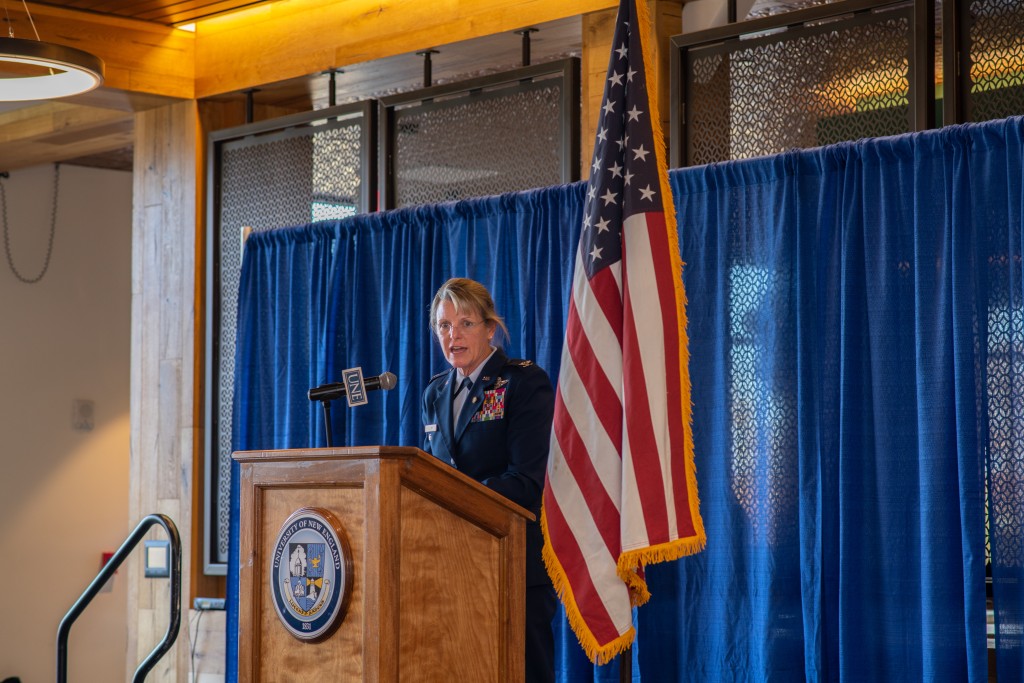 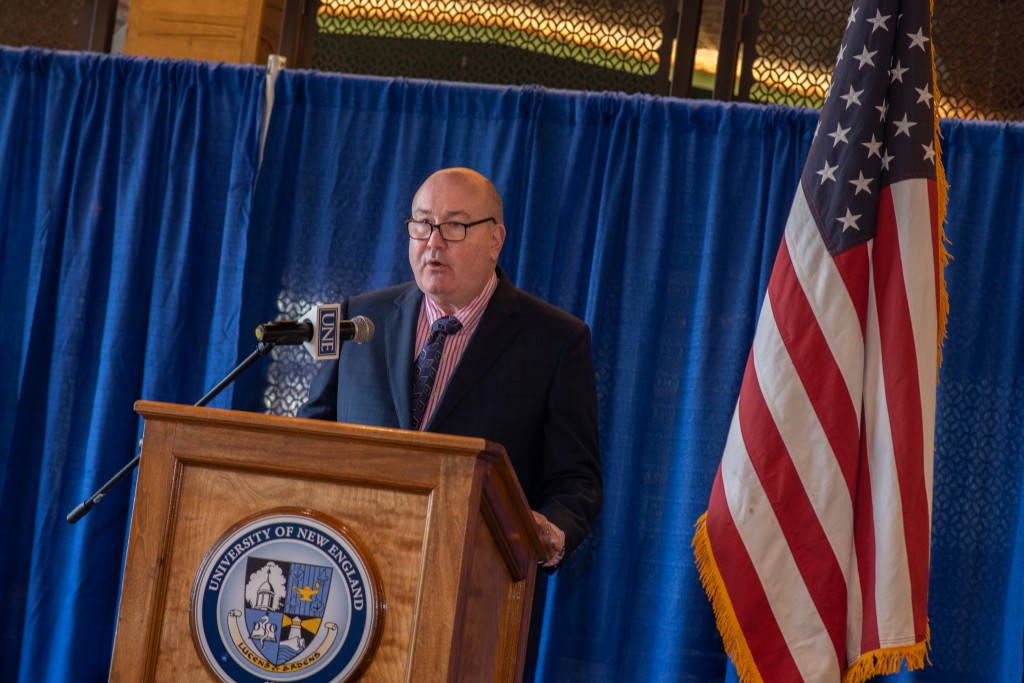 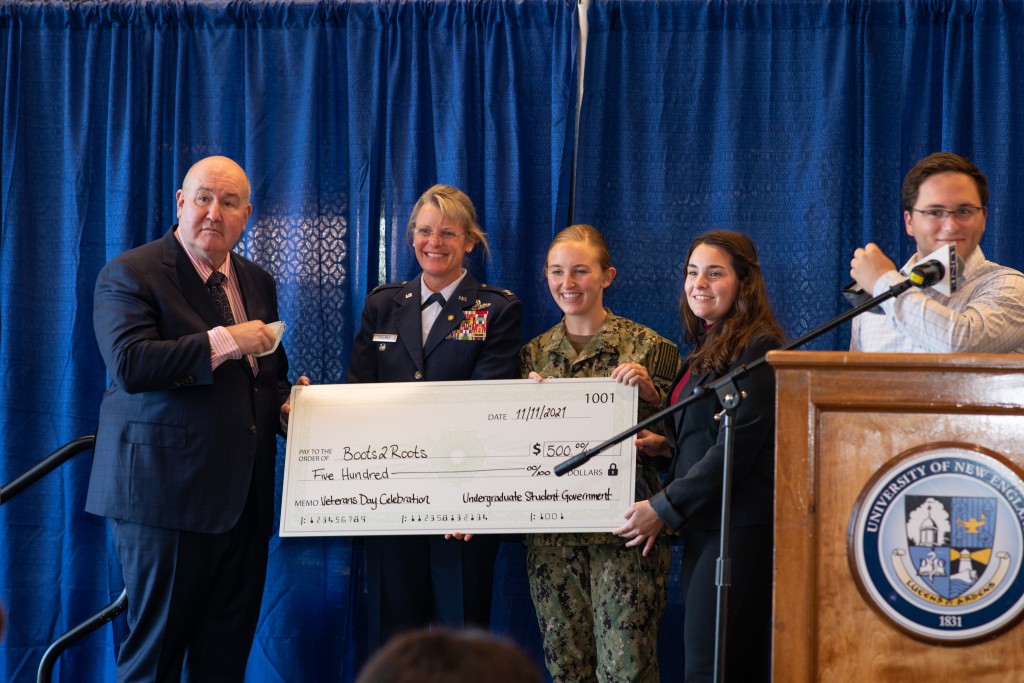 The USG presents a $500 check to Boots2Roots.
Image 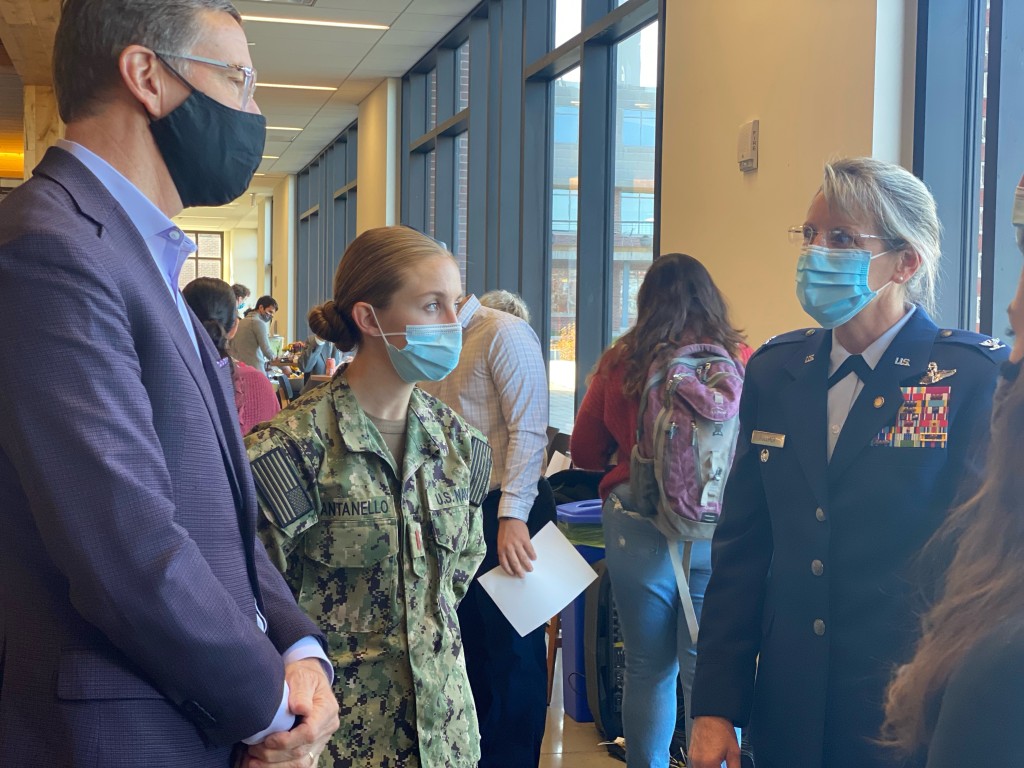 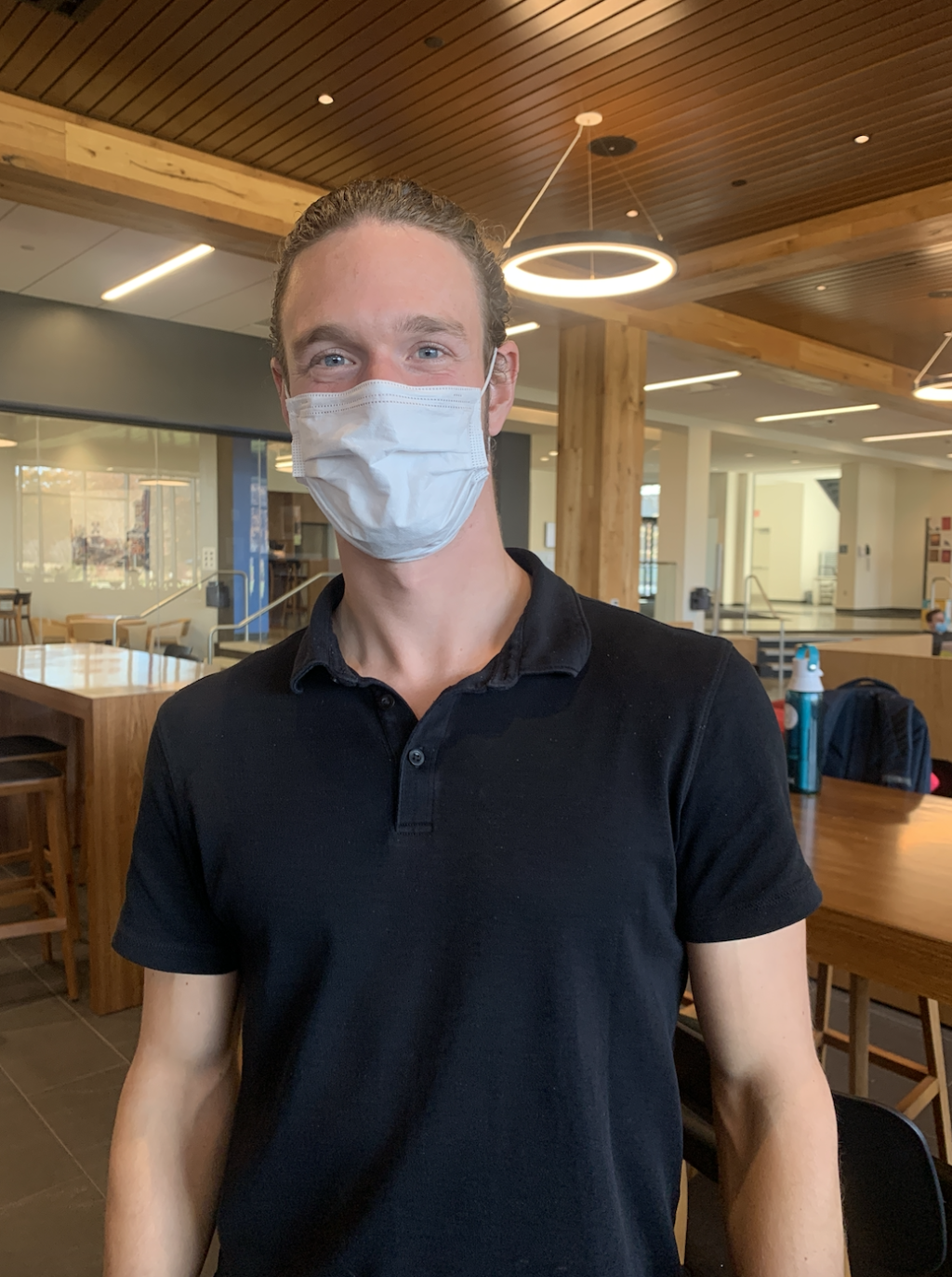