Further cementing its connection to Tangier, Morocco, the University of New England has unveiled an authentic Moroccan tile wall inside the Danielle N. Ripich Commons, its newest building in Biddeford.

As well as providing the Commons with a stunningly beautiful work of craftsmanship, the wall symbolizes UNE’s openness to the world beyond Maine’s shores, its embrace of diverse cultures and its extraordinary commitment to global education. UNE undergraduates already participate in global learning experiences at nearly five-times the national average, and now their time in Biddeford will provide them with a glimpse of the sort of culturally-infused artistry that can enrich the better sojourns abroad.

The intricate blue and white zellij tile wall adorns a portion of the Commons’ second floor where students can stop by to learn about and prepare for opportunities to study abroad.

While the crown jewel of UNE’s Global Education programming is its gleaming campus in Tangier, students visiting the area will also have the opportunity to learn about UNE semester-abroad experiences in Spain, France and Iceland, as well as faculty-led excursions to destinations like Thailand, Belize, and Costa Rica.

“There’s no better expression of our global aspirations,” said UNE Vice President for Global Affairs Anouar Majid, Ph.D., describing the new wall. “It reflects not only our presence in Morocco, but also our global aspiration to be open to other civilizations and to embrace other cultures and traditions.”

The different panels that make up UNE’s new wall were handcrafted in the Moroccan city of Fez by Arabesque, an internationally-renowned company owned by the Naji family, which has been creating Andalusian Moroccan tilework for more than 750 years. The work on the wall began in Fez with the computer-aided design of a master grid. Next, workers cut the different colored stone pieces, using hammers and chisels, to create the unique shapes that were then fit together and affixed to panels that could be transported to the United States. The panels were installed in the Commons in June.

Master artisan Ahmed El Mghari, who led the work at UNE, has been applying himself to the craft he loves since he was a six-year old in Fez. “A wall is like reading poetry or doing science,” he explained. “It is like a painting that reveals its own beauty and speaks for itself.”

Initiated by UNE’s Office of Global Affairs and installed with the support of Facilities Management and other divisions at UNE, the story of how an authentic Moroccan tile wall came to reside in Biddeford, Maine, dates to 2011 when Arabesque crafted the Andalusian courtyard at the Metropolitan Museum of Art in New York. The project, which provided the Met’s Islamic Art wing with a stunning centerpiece, drew extensive coverage from the New York Times, appearing on the front page of the Arts & Leisure section.

Majid – as a leading Moroccan-American educator -- was invited by Adil Naji, the CEO of Arabesque, to visit during the construction phase, to see first-hand how Moroccan artisans could build a medieval Andalusian courtyard from scratch. He also met with Met officials. Fast-forward a few years, and UNE opened its Tangier Campus; fast-forward a few years more, and the opening of beautiful Ripich Commons struck Majid as a fitting time to build a monument reflecting the cultural influences that define the UNE student experience in Biddeford and Morocco.

After a site visit, Naji and his team designed an appropriately UNE-blue color pattern that reflects the traditions of Moroccan and Spanish history.

“The wall is like a chronicle in tile of the shared cultural heritage of Spain and Morocco,” says Majid.

According to the master craftsman, the patterns appearing on the different panels pay homage to the shapes found in Islam’s sacred structures, such the Ka`aba in Mecca or the Dome of the Rock in Jerusalem, as well as to the refined artistry of Andalusian Spain.

In the years to come, perhaps, this newest addition to UNE’s Biddeford Campus will become an international landmark in its own right, notable for its expression of the leading role UNE has played in bridging cultural boundaries on either side of the Atlantic.

To learn more about the UNE Office of Global Affairs, visit www.une.edu/global 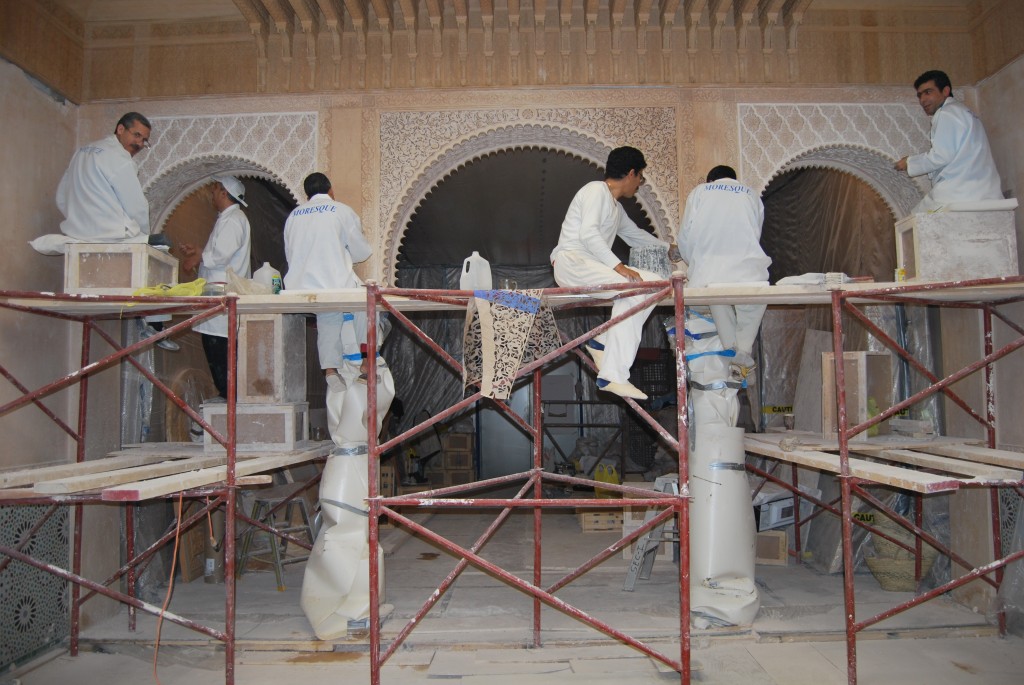 Arabesque crafted the Andalusian courtyard at the Metropolitan Museum of Art in New York in 2011.
Image 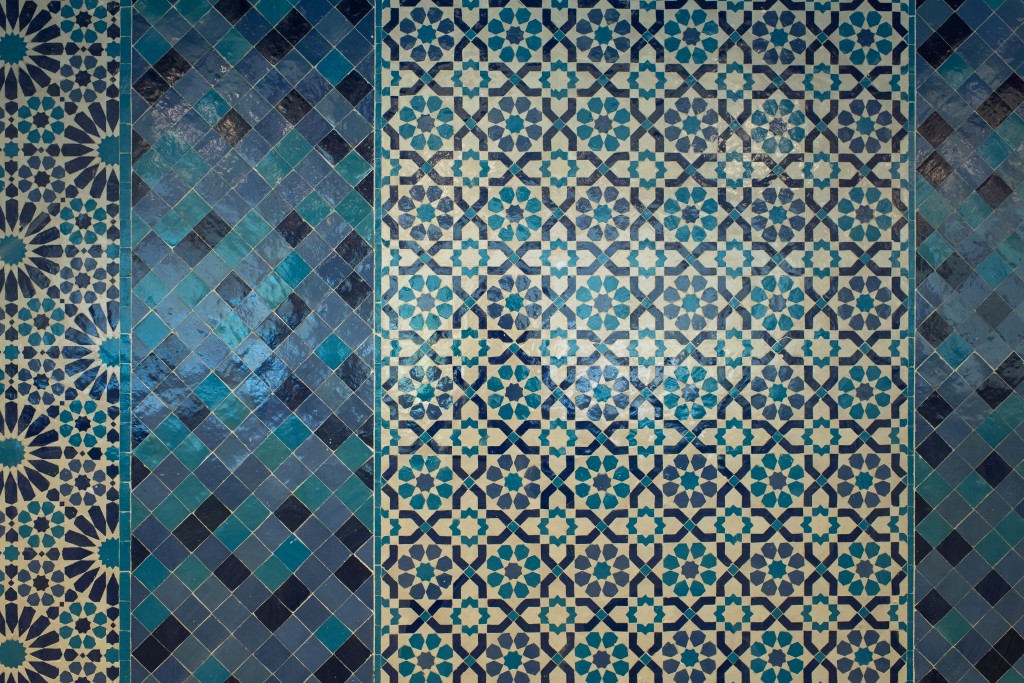 The different panels that make up UNE’s new wall were handcrafted in the Moroccan city of Fez by Arabesque, an internationally-renowned company owned by the Naji family, which has been creating Andalusian Moroccan tilework for more than 750 years.