Greening Our Campuses Through Advice and Advocacy

The Environmental Council (EC) composed of students, faculty, and professional staff from both UNE's Biddeford and Portland campuses, aims to help the University president assess UNE's progress in "greening" the campus. This mission also involves recommending initiatives and mechanisms through which UNE might become more environmentally friendly. Thus, the EC acts in both advisory and advocacy capacities.

The EC is a focal point for increasing awareness and understanding of environmental issues both on campus and in the extended community. Members of the EC, and others who have worked hard over the years to make it a reality, believe the EC should be effectively integrated into the University's decision-making process in order to ensure wise resource use on campus and to encourage greater awareness of the environmental challenges facing society. The EC considers the tract of land where the Biddeford Campus resides one of the few remaining ecologically intact natural habitats in coastal southern Maine. Promoting the careful stewardship of this land is a high priority for the EC.

The EC was formed in the fall of 2006. It evolved out of what was previously known as the UNE School-Wide Environmental Awareness System (SEAS), and the pioneering efforts of faculty and students in the Department of Environmental Studies (now the School of Marine and Environmental Programs).

You can participate in EC meetings via Zoom. Please contact one of the Environmental Council co-chairs to be added to the EC distribution email list and receive the Zoom link. 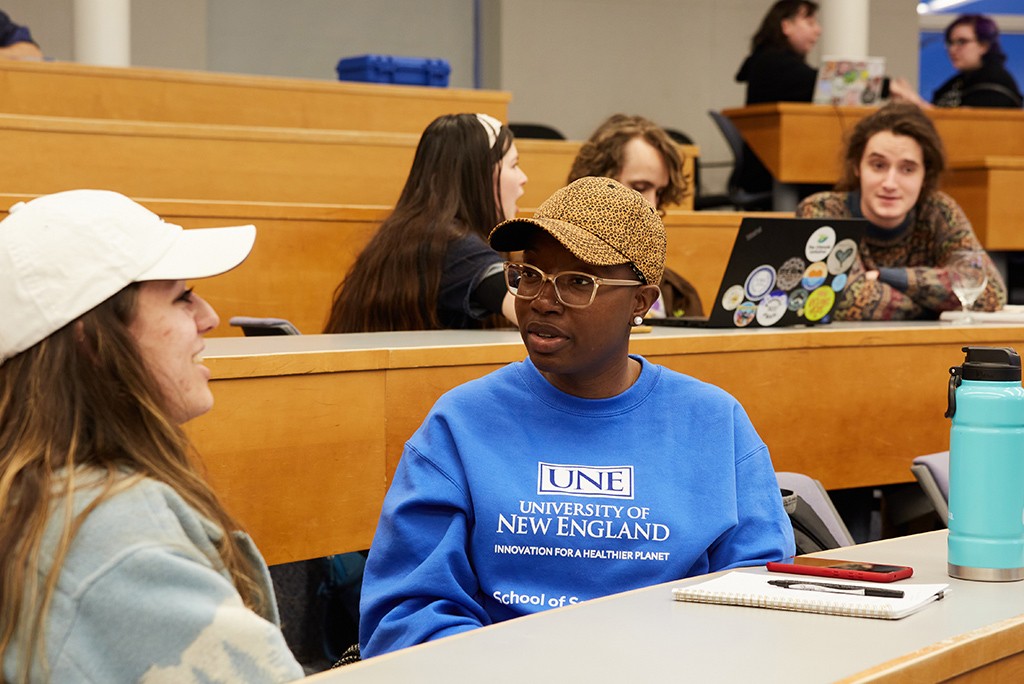 In 2011, the EC endorsed a project to encourage a more sustainable solution for drinking water on UNE’s campuses. At the end of the 2010-2011 academic year, there were 71 Poland Spring bottled water cooler units in the academic departments spread across the Biddeford and Portland campuses. The University purchased more than 16,000 gallons of water a year to fill these coolers.

The EC worked with a local vendor to install 72 filtered water coolers on campus, which provide water to nearly twice as many people previously serviced by the bottled water coolers. The coolers are 48% more energy efficient than the bottled coolers. They have a nine-stage filtration process, which provides exceptional tasting water from our own taps.

There are environmental implications for bottled water including: emissions from transportation, aquifer depletion from large-scale extraction, fossil fuel consumption to make water bottles, and toxin-release from incineration of bottles. There are also potential health implications from drinking water from these bottles such as the consumption of BPA, an endocrine disrupter, which leaches into the water from the plastic. By endorsing this project and seeing it through to its completion, the EC helped UNE do its part to address these concerns.

UNE’s Library Services undertook a data collection project focused on paper usage in 2012. The study revealed that the Biddeford Campus’ Ketchum Library goes through approximately eight-to-ten cases of paper per week, or 275 cases each year, and the Portland Campus’ Abplanalp Library goes through an average of six cases per week, or 180 cases each year.

Waste paper was collected and measured for a month, and during that time more than 200 pounds of paper was collected or 22,000 sheets, which is roughly equivalent to 44 reams of paper (nearly 50% of print jobs are immediately discarded/recycled). Moving forward, the University is exploring pay-for-print options to make users more aware of their paper consumption.

In March of 2014, President Ripich and the University Council voted unanimously to sponsor, on a trial basis, a shuttle bus between UNE's Biddeford and Portland campuses during the 2014-15 academic year. The initiative grew out of a proposal by the Environmental Council. During the Fall 2013 semester, the EC analyzed feasibility data from the entire UNE community to better understand demand for this service. The EC concluded there were four reasons why such a shuttle would be successful. First, the UNE Dental and Physical Therapy students present a predictable population that is based in Portland and takes classes (in the Gross Anatomy Lab) on Tuesdays and Thursdays in Biddeford. Second, there is a large community of staff and faculty who live in the Portland area and have expressed interest in a shuttle. Third, UNE has a number of undergraduate programs in which students take classes in Biddeford during their first two years and then in Portland during their third and fourth years. As there is no on-campus housing in Portland, these students find off-campus housing in the Portland area. A bus service provides them with the option to remain on the Biddeford Campus. Finally, the UNE Climate Action Plan calls for a 5% reduction in transportation emissions from 2010 levels by 2016. Transportation emissions account for more than a third of all University emissions.

In the Fall of 2013, the EC was approached by a group of students looking to create internship opportunities at UNE focused on increasing education and awareness of divesting the UNE endowment from fossil fuel companies. The EC voted upon and passed five semester-long internships, which began in the Spring 2014 semester. The students are both conducting research and educating the wider UNE community about divestment and related issues.

In 2008 the EC Recycling Subcommittee provided technical support to the Environmental Health and Safety Department in the development of a single-sort recycling program on the Portland Campus. In 2010 the program expanded to include the Biddeford Campus. Currently, UNE recycles approximately 58 tons of material annually.

Ferry service on the Saco River started in the Spring of 2012 as a student feasibility project in an undergraduate Introduction to Environmental Issues class taught by Dr. Noah Perlut. The feasibility survey showed overwhelming interest in service between Camp Ellis and UNE’s Biddeford Campus.

With the support of the EC, in the Fall of 2012 UNE’s Department of Environmental Studies, Office of Sustainability, and Undergraduate Student Government (USG) began offering UNE community members this nationally unique transportation service. The ferry ran for three weeks, allowing commuters to bypass a ten-mile loop to the nearest bridge. Over the three weeks, 126 round-trip commutes were avoided, averting approximately 2,520 miles of car travel and associated emissions. The ferry continued to offer service in the Spring 2013 semester, and then again during both semesters of the 2013-2014 academic year.

In 2008 President Danielle Ripich became a signatory to the American College and University Presidents’ Climate Commitment (ACUPCC). This document was a public acknowledgment of the responsibility of institutions of higher education to lead the way in reducing carbon emissions. As a requirement of becoming a signatory, UNE developed a Climate Action Plan which identified 2040 as the goal to become carbon neutral.

In 2008 the EC endorsed a pilot study on eliminating chemical-based cleaners at UNE. The six-month study was designed to assess the impact of eliminating such cleaners in the Marine Science Center and to determine whether further implementation of the program was warranted. In 2010 the Housekeeping Department adopted a green cleaning program.

In 2007 the EC advocated for a position of Sustainability Coordinator to be created to help guide the University’s environmental initiatives. In 2008 a coordinator was hired on a part-time basis to conduct a greenhouse gas emission inventory and implement the single-sort recycling program. To date, the Sustainability Office has numerous accomplishments and the coordinator currently fills an important supportive role on the Environmental Council.

In 2007 a College of Medicine student proposed a pilot project to burn biofuel in the furnace of the Creative Fine Arts building and certain vehicles in the Biddeford Campus "fleet.” The EC-endorsed project was successful to the extent that UNE expanded the use of biofuels the following year to heat all buildings that are capable of burning them on both campuses. UNE currently uses B5 (5% recycled vegetable oil) in fifteen buildings.

Since 2007 the EC continues its advocacy and educational effort surrounding its endorsed policy stance that construction of on-grade parking lots should be an option of last resort.

In 2008 the EC endorsed a proposal for the coastal restoration of UNE’s Saco River waterfront, including the construction of a new trail leading from the Welcome Cottage to the Kiosk. The proposal was the final product of Dr. Pam Morgan’s course Restoration of Coastal Habitats of Maine. The students’ presentation earned first prize at the College of Arts and Sciences Symposium. The EC believes that following through with the project would be a good way for UNE to begin its commitment to the UNE Arboretum Project.

The EC supported the Department of Environmental Studies and the efforts of Dr. Richard Peterson to develop and coordinate UNE’s participation in Focus the Nation. Focus the Nation is a nationwide initiative, led by universities, high schools, churches, various civic groups and corporations to educate citizens about global climate change and apply political pressure through activities nationwide. At the recommendation of the Environmental Council, President Ripich endorsed UNE’s participation in the Focus the Nation event, which took place with a host of activities involving faculty, students, and prominent guest speakers from January 24–February 1, 2008.

On October 24, 2007 members of the EC showed support for the local shuttle bus service by holding the EC's regularly scheduled meeting on a bus. During the 30-minute round-trip ride between the Biddeford Campus and in-town Biddeford, participants had a lively conversation concerning a range of campus environmental successes and challenges. The shuttle service is one element of a comprehensive parking and transportation strategy to avoid future construction of parking lots, as well as to develop deeper community relations with Biddeford. 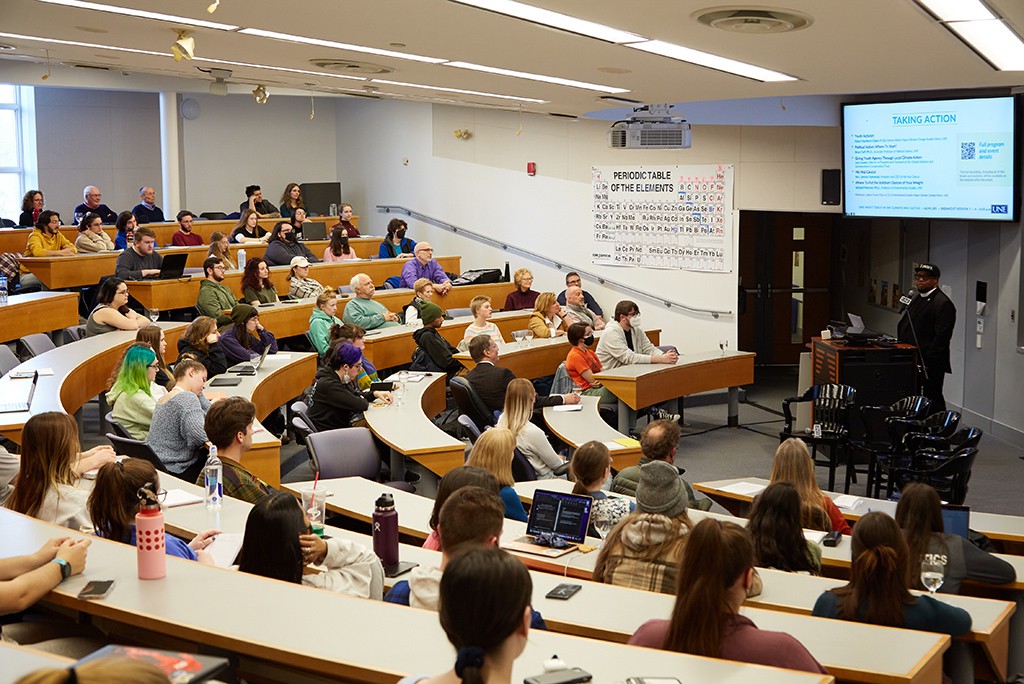 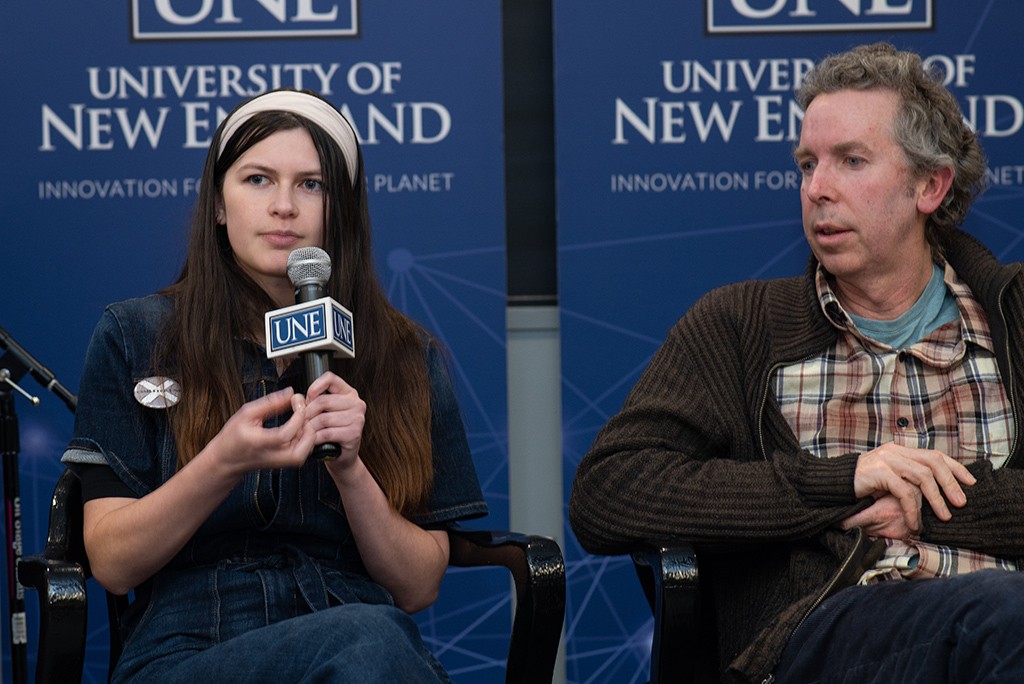 Do you have an idea for how UNE can be more environmentally friendly? We’d love to hear about it. The Environmental Council can help guide you through the process of putting your idea into action. You do not have to be an active member of the EC to propose a new initiative. Any student, student group, faculty, or professional staff member can submit a new proposal.

Since its inception, the EC's project initiation process has ensured a transparent and competitive system of evaluating proposed environmental actions on UNE’s campuses. We hope this fair, open system attracts a wide range of environmental proposals from UNE community members. We evaluate the strengths and weaknesses of these and then make a recommendation of whether they should receive presidential, senior-level, University Council, and/or Board of Trustee support.

In order for the Environmental Council to consider your idea, you will need to submit a New Project Proposal Form. The proposal ensures that new ideas brought to the group have been thoroughly thought out in terms of costs, impacts, and feasibility. The Environmental Council will weigh your idea in the broader context of sustainability projects at the University and vote on whether to support your project. If you need help filling out the proposal form, the EC can designate a mentor (someone who has experience putting together a proposal) to guide you through the process.

You do not need to fully complete the proposal form before bringing your idea to the EC. We recommend that you attend an initial meeting to gauge initial support. If you are unable to attend a meeting, email the EC co-chair or email the assistant director of Sustainability who can bring the idea to the group on your behalf.

The EC will use the following criteria to evaluate new proposals:

How likely the project is to generate long-term economic benefits to UNE.

The potential for the project to foster a culture of sustainability at UNE.

How quickly and easily the project can be implemented using UNE’s existing resources and infrastructure.

The potential impact on the health and safety of the UNE and surrounding community.

The degree to which the project offers an opportunity to integrate sustainability into new or existing courses and raise environmental awareness in the community.

The potential to enhance recruitment and retention of students and to attract potential donors by projecting a positive image of environmental stewardship at UNE.

How quickly the project requires the Environmental Council to act in order to have a positive impact on a new or existing project.

Please contact one of the Environmental Council’s co-chairs, Laurie Mathes or Ariana Walker, for more information about how to get involved.