The zebrafish lab at UNE.

The Maine INBRE is a collaborative network of state educational and research institutions that strives to strengthen Maine’s capacity to conduct cutting-edge biomedical research. UNE became the 14th member of the statewide research network on May 1, 2020.

UNE welcomed William Sampson, a recent graduate of the University of Maine at Farmington, and student Alsu Shagieva of College of the Atlantic for the summer to conduct hands-on and cutting-edge biomedical research. UNE also hosted a student from Southern Maine Community College (SMCC), Isak Silva, who conducted his research at UNE with Maine INBRE funding.

“The INBRE’s goal is to grow Maine’s biosciences workforce and to educate students in those areas, something at which UNE excels,” said Karen Houseknecht, Ph.D., associate provost for Research and Scholarship. “It’s exciting that we have the opportunity to get some of the best students in Maine to come to UNE to complete a research experience.”

Sampson divided the embryos into two groups: those that received varying doses of antipsychotic drugs and those that did not. Their hypothesis, Sampson said, is that those given the medications will have altered immune function. Sampson then worked with Deborah Barlow, B.S., analytical chemist in the Houseknecht Lab, to analyze the fish for drug exposure and inflammatory biomarkers.

The team already saw some preliminary results within a short period of time.

Using mass spectrometry, the team found that administering drugs to the embryos in the water resulted in dose-dependent levels of drug in the fish, supporting the hypothesis that environmental exposure to these drugs could have potential effects on embryo development.

Work is ongoing in the Houseknecht Laboratory to quantify inflammatory biomarkers in the zebrafish using mass spectrometry.

“There are very few opportunities in the state of Maine for a student to learn how to use mass spectrometry, which is incredibly valuable,” said Houseknecht. “So, by the end of this really short, intensive experiment time, we're going to know the effect of these low-level drug exposures on these immune and inflammatory markers of the zebrafish — all in one summer.”

Shagieva, a sophomore ecology student at College of the Atlantic in Bar Harbor, spent her summer working in the lab of Kerry Tucker, Ph.D., associate professor at the College of Osteopathic Medicine at UNE.

There, she picked up a long-running project in the Tucker Lab involving the investigation of a mutant mouse line engineered to specifically remove an important subcellular compartment from the neurons of the brain, a compartment called the primary cilium. The primary cilium is known to orchestrate many crucial roles during development, but it also has functions in postnatal life. She analyzed the structure of the affected neurons using an old technique called a Golgi stain. There, she uncovered a subtle but important difference in the spine density of the dendrites of the excitatory neurons of the CA1 region of the hippocampus.

Shagieva also spent time in the lab of Christoph Straub, Ph.D., assistant professor of biomedical sciences, conducting imaging experiments with Golgi stains of brain slices that were prepared from mutant and control animals. She utilized a sophisticated neuroscience technique called “patch-clamping,” a process in which individual neurons are pricked with a slender glass pipette in the CA1 region of acutely prepared hippocampal slice cultures, and their electrical activity is measured. She uncovered preliminary evidence hinting at a difference between the normal and mutant neurons, but more results are needed to confirm this result.

Shagieva went on to submit and present an abstract to the 2021 MDI Biological Laboratory Student Symposium, entitled “Loss of primary cilia in pyramidal cells of the hippocampus results in a loss of functional excitatory synapses.” The abstract was also accepted for the 2021 North East Regional IDeA Conference, which was hosted virtually this year by the Rhode Island INBRE. Her results will be incorporated into a research article under construction by Tucker.

“I’m very happy to have done the INBRE fellowship,” Shagieva said. “I’ve mainly shadowed on other projects or in internships, so it was great to learn how to use the equipment at UNE and be able to do my own project.”

“It’s a really wonderful opportunity to bring people from anywhere here to UNE, and I look forward to engaging with INBRE students again in the future,” Tucker remarked.

The summer’s final INBRE study involves the relationship between neonatal pain and psychological disorders later in life, including anxiety, depression, and addiction. Michael Burman, Ph.D., professor of psychology in the School of Social and Behavioral Programs, with the assistance of Isak Silva, the SMCC student, is examining the relationship between the expression of the neuropeptide corticotropin-releasing factor (CRF) within the amygdala — the brain structure charged with processing fear — and later life psychological health.

The study relates to Burman’s previous work that may explain why babies that spend time in the neonatal intensive care unit (NICU) as infants often develop anxiety disorders later in life.

Additionally, Burman and Silva are examining the effects of inhibiting CRF expression, which may reduce anxiety — and they think they’ve found the way.

Burman and Silva are exploring the use of DREADDs (designer receptors exclusively activated by designer drugs) to inhibit CRF in transgenic rats. More simply, the research team is exposing rats that have experienced neonatal pain to a biomedically engineered, or designer, receptor to silence the cells exposed to CRF with the goal of relieving symptoms of pain and anxiety.

The team hopes that, if they can prove their DREADD inhibits CRF and anxiety, they can eventually apply their research to human subjects.

“This is a new hypothesis. Nobody’s done it before, and these things are really cutting edge,” said Burman. “Down the road, we can see whether these cells seem to be affected in humans and help guide us toward possible pharmaceutical treatments.”

Silva, who is currently studying biotechnology, said working on this novel research was an experience he will never forget.

“I feel incredibly honored,” he said.

The three research projects, impressive as they are, represent only a microcosm of the research that took place on UNE’s campuses over the summer months, Houseknecht said.

More than 50 students conducted research through the University’s Summer Undergraduate Research Experience (SURE) program, exploring topics from phytoplankton identification to novel methods for saving sharks from fishing nets, while others dove into research in the neurosciences with funding from the Kahn Foundation Student Research Fellowship.

“It took a village to ensure that we could provide in-person summer research opportunities for our students during this second summer of the pandemic,” Houseknecht remarked. “I’m delighted and hopeful about welcoming more INBRE fellows in the future as well as growing our scholarly opportunities for UNE students.” 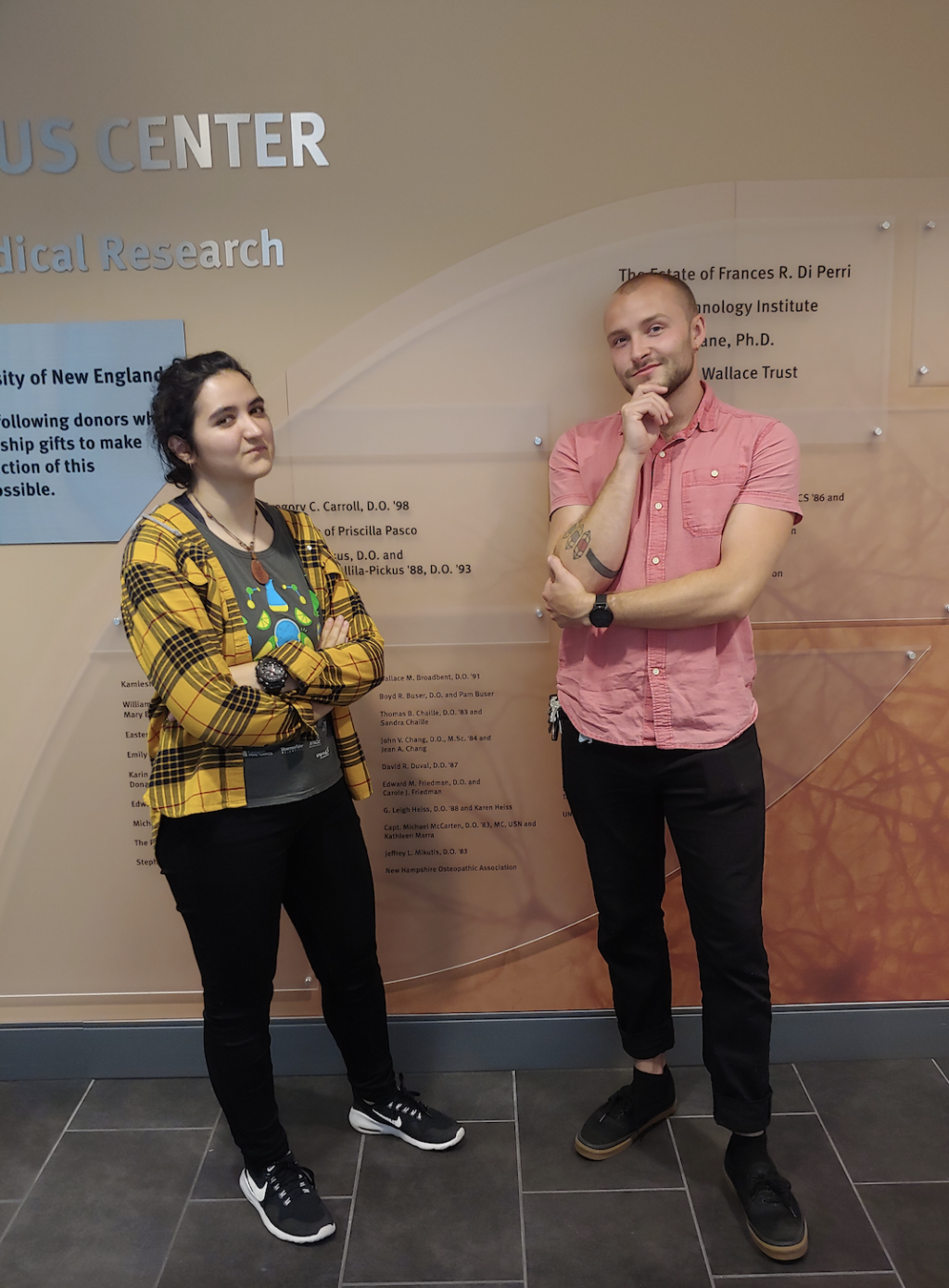