The University of New England’s scenic Biddeford Campus extends more than 4,000 feet along the shore where the Saco River converges with the Atlantic Ocean. As such, UNE is perfectly positioned for the study of the Saco River Estuary, a biologically unique body of water that includes three types of tidal marshes—salt, brackish and freshwater—and a rich assemblage of species adapted to its dynamic conditions.

The Saco River Estuary Project represents a unique collaboration between UNE scientists and students from a variety of disciplines, and partners from UNE’s surrounding community. The project was born in 2010, when UNE received a $125,000 grant from the Experimental Program to Stimulate Competitive Research to study the portion of the Saco that extends from the dams of downtown Saco and Biddeford to UNE’s Biddeford Campus. In the years since, the project has received an average of $90,000 per year from the Maine Sustainability Solutions Initiative, which is funded by the National Science Foundation.

Since then, UNE faculty and students from the Environmental Studies, Biology, Marine Biology and Business departments have made a range of exciting discoveries within the river and its 360 acres of tidal marshes. This new knowledge is quite significant scientifically, as it helps us chart the management and preservation of this special body of water. 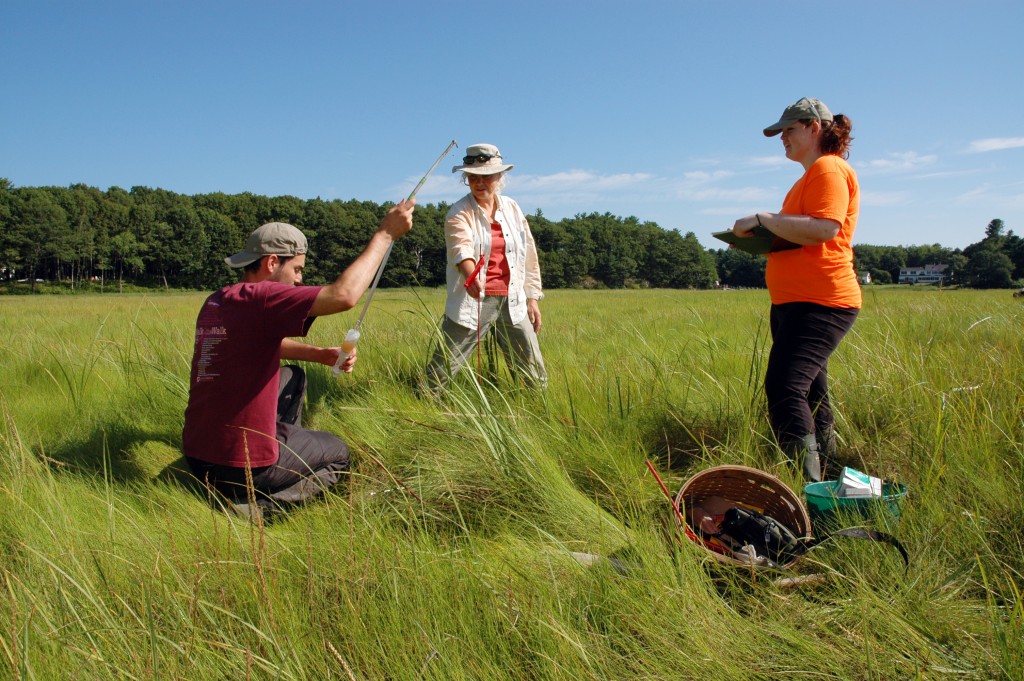 We have learned that the water quality of the estuary is generally good, but that levels of coliform bacteria rise sharply during the summer months, most likely due to runoff of polluted water from downtown Saco and Biddeford. We have also observed that nitrogen pollution is stimulating the growth of green algae and degrading the marsh peat.

We have learned that at least 60 different species of fish swim in the estuary, including many species that were absent a few decades ago. The Atlantic sturgeon is one such resurgent species that has come to depend on the estuary. On June 5, 2013, a team of UNE faculty and students netted 38 Atlantic sturgeon (including one that measured seven-feet and one-inch long, and weighed 130-pounds) and two short-nosed sturgeon during a 20-minute period. Other significant fish to the Gulf of Maine that utilize the estuary include pollock, hake, blueback herring, alewife, Atlantic silverside, American sand lance and bluefish.

As climate change occurs, rising water levels may force the tidal wetlands to shift to higher ground. By compiling and analyzing aerial photographs of the estuary, we are building a baseline to guide future conservation efforts.

We have observed 133 species of birds in the estuary, including many that are not typically associated with estuarial habitats. Nearly half of the bird species found in the state of Maine have been observed in this relatively small geographic space, including such endangered species as the peregrine falcon and black-crowned night heron.

We have discovered ten species of plants in the estuary that are listed as rare or threatened in Maine. The invasive common reed (Phragmites) is spreading in the estuary’s marshes, threatening to crowd out native plants and wildlife.

We are advocating for compliance with and enforcement of existing setbacks and shoreline protection policies. These guidelines encourage retaining trees and shrubs along the water’s edge protecting land next to valuable tidal marshes; protecting water quality; and protecting abutting property from flood waters so that as the sea level rises wetland can shift to undeveloped areas on higher ground.

We are studying ways to reduce the flow of polluted runoff water from area roads, parking lots and lawns into the estuary, and to minimize such pollutants' use and effects.

We are studying the prevalence and effects of invasive species and gaining knowledge about how to combat them.

We sponsor and conduct educational/outreach efforts to engage local children and their families in the life of the estuary so that they will feel a sense of ownership in ensuring its continued health.