The 2021-22 season was a special one for the University of New England men’s ice hockey team. The Nor’easters won a program-best 23 games, captured the Commonwealth Coast Conference (CCC) Championship, and advanced to the National Semifinal. The team also won a team-record 13 straight games and was ranked in the top 15 in the USCHO Division III Poll for 18 weeks, finishing as the No. 5 team in the country. 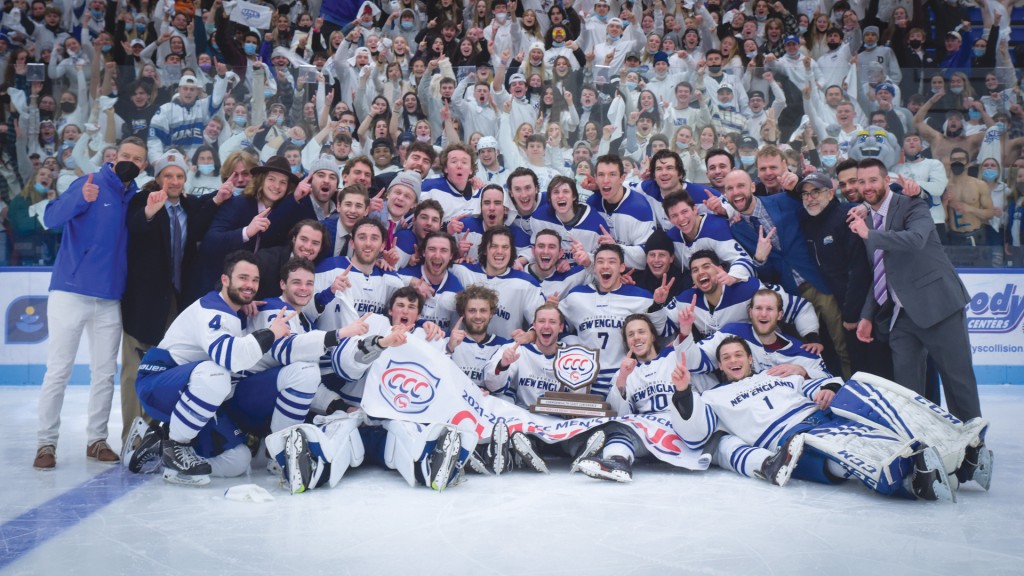 UNE started its season strong and was 8-1-1 and playing some of its best hockey heading into the winter break. After their final game before break, a 3-1 victory over Wentworth on Dec. 11, the Nor’easters were scheduled to play in a tournament hosted by Norwich on New Year’s Day. The tournament ended up getting cancelled, as did the next three games, due to COVID outbreaks on the opposing teams. Although healthy, UNE was faced with an unprecedented 40-day break between games.

The team struggled in its return on Jan. 21 with a 6-2 loss to Curry College and ten days later lost again. “It was discouraging for our guys at the time and stressful for our staff, but it made us all appreciate the moment more as we were making our run at the end of the year,” said head coach Kevin Swallow.

Little did they know the loss on Jan. 31 would be their last one for a while, as the Nor’easters coasted through the final eight games of the regular season and the first two rounds of the CCC Championship. 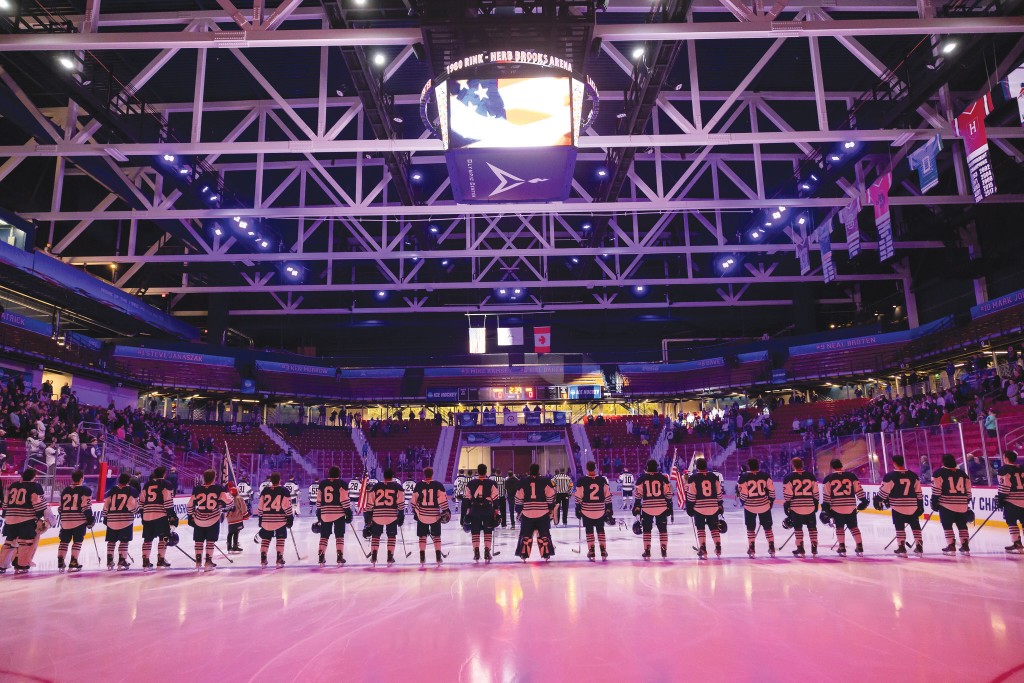 This set up a showdown with Endicott College, one of the only teams to beat UNE, in the conference finals, with a trip to the NCAA Tournament on the line. In front of a sold-out crowd at the Harold Alfond Forum, the Nor’easters battled back from a late deficit, and Aaron Aragon scored the tying goal with just 48.2 seconds left. Jared Christy scored early in overtime to give UNE its second championship in four years.

Things would not get any less dramatic for the team in its first-round NCAA Tournament matchup against No. 15 Plymouth State. Two first-period goals by the Panthers quieted the crowd at the Forum, but the Nor’easters came from behind once again with goals in the second and third periods to send the game into overtime. Neither team could break through in the first extra period, but Austin Morgan sent UNE to the next round with the game-winner in double overtime.

UNE visited No. 2 Utica (N.Y.) in the Quarterfinals. The Pioneers’ home rink is historically one of the toughest places to play, averaging around 3,000 fans per game, and this game was no different. Despite being outshot by nearly two-to-one, the Nor’easter defense stymied the nation’s second-best offense, and the team stunned the home crowd on its way to a 2-0 victory and a spot in the semifinals.

The semifinal round was played at Herb Brooks Arena in Lake Placid, New York, the site of the “Miracle on Ice” for the U.S. Olympic Hockey Team in 1980. UNE’s miracle season came to an end with a loss to No. 3 SUNY Geneseo, but Coach Swallow remarked that experience elevated the hockey program to the national stage. “It was pretty special for all of the guys. In the moment, we were just taking it day-by-day, but now, having time to reflect, it was a tremendous experience, and we’ve put our program in a great position,” said Swallow.

In the postgame press conference, graduate student defender Chris Jones echoed Swallow’s thoughts. “It was an unbelievable ride,” he said, “and the most fun I’ve ever had playing hockey. This season really put us at another level and showed everyone how special the University of New England hockey program is.”

The effects of the memorable season are already being felt, as Swallow has seen an increase in interest with recruiting. Four players from the team have also signed professional contracts or have been offered tryouts.

The Nor’easters look for more success this season, which kicks off with an exhibition game against Plymouth State on Oct. 21.